Features Economy Job Cuts
44 per cent of Canadian households have lost work due to COVID-19: Survey 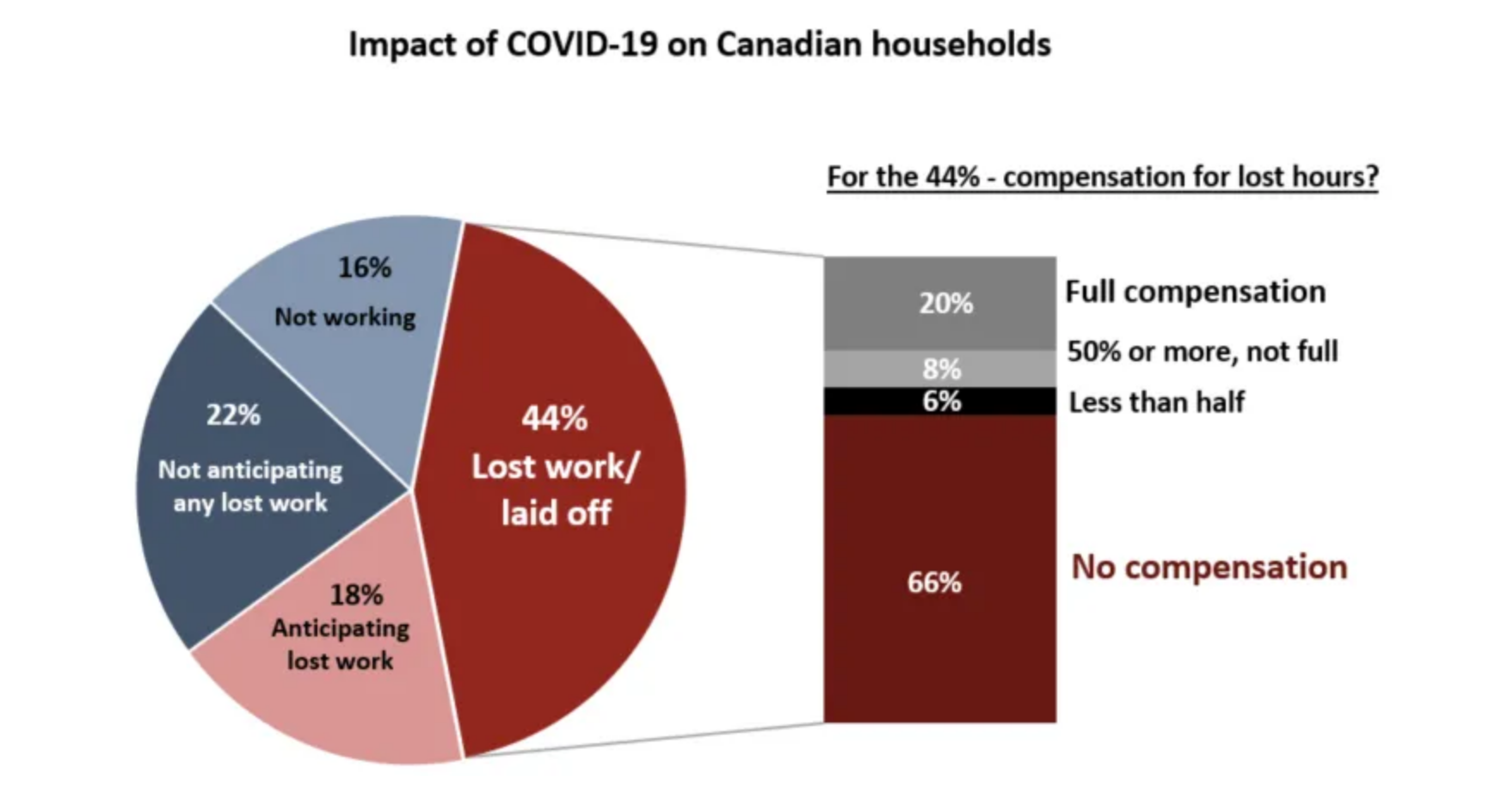 The picture around job losses in the early weeks of COVID-19 remain hazy, but a recent public opinion survey from the Angus Reid Institute is shedding some light on the extent of the problem.

Already, 44 per cent of Canadians say  they — or someone in their household — have lost hours at work due to the economic downturn.

“Among this group, the majority say their employers are not covering any of their now disappeared wages,” it said in a post.

Another 18 per cent anticipate losing work but nearly one-in-five (22 per cent) feel secure and don’t expect to lose any work during the pandemic.

Younger workers (aged 18 to 24) were more likely to report losing income — nearly half have lost work due to COVID-19.

No part of Canada has been left unscathed by job losses, according to the Angus Reid Institute.

Alberta is hardest hit — with 50 per cent of respondents reporting at least one member of their household losing hours. Manitoba is the least affected, with one-in-three (32 per cent) reporting lost income.

Here’s a look at the provincial breakdown of households reporting lost work hours:

Crisis does not discriminate by earnings

High-wage earners were just as likely as low-wage workers to lose hours, the survey found. While 44 per cent of people earning less than $25,000 per year have lost hours or been laid off, the number was almost identical (40 per cent) for those earning in excess of $150,000.

Here’s a look at the breakdown, by wages, of Canadians who have lost work:

Will jobs come back?

The majority of Canadians who are out of work expect to get their job back at some point, the survey found.

Nearly half (48 per cent) said they were certain — “it’s just a matter of time.” About one-third (34 per cent) were “pretty sure” while 13 per cent were doubtful.

Only four per cent said they thought their job was gone forever and they would need to find something else.

One-in-three Canadians (34 per cent) are worried their household may miss a rent or mortgage payment this month — or have to start borrowing money (32 per cent).

Further, almost two-in-five (37 per cent) of those who have experienced job loss in their household say they’re not equipped to handle even an extra $100 expense in the next 30 days.

The Angus Reid Institute conducted an online survey from March 20 – 23, 2020 among a representative randomized sample of 1,664 Canadian adults who are members of Angus Reid Forum. For comparison purposes only, a probability sample of this size would carry a margin of error of +/- 2.5 percentage points, 19 times out of 20. Discrepancies in or between totals are due to rounding. The survey was self-commissioned and paid for by ARI.

Related
Webinar: Tips, tactics for employers in reducing labour costs during COVID-19
How employers can prepare for a coronavirus outbreak
Are you afraid to travel? Conferences, tradeshows seek to reassure attendees
$82 billion funding package just the start: Trudeau
Tags