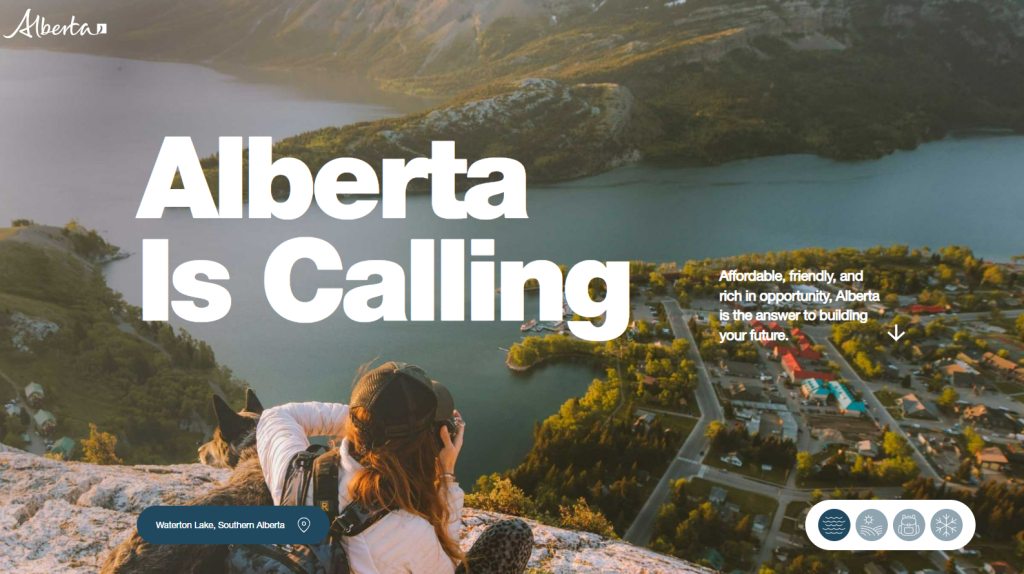 A screenshot from the website set up by the Alberta government to tout the benefits of moving to the province.

When Zeel Shah’s partner left Toronto for a job in Edmonton in 2018, the young couple had to decide which city offered the future they wanted for themselves.

Shah, now 28, says she and Deep Cheema compared the lives they could have in Toronto and Edmonton and concluded their home ownership goals were more achievable out West.

“We wanted to eventually settle down,” she said. “As a first house, we didn’t want to spend like one million dollars.”

A year after Cheema moved, Shah joined him in the much colder and less-populated city. In 2021, the couple bought their first home — a townhouse — together in Edmonton.

Shah says looking back, moving to Alberta was the right decision for their now family of three.

Alberta is currently vying to attract more young people like Shah and Cheema, and economists say it’s a good thing for provinces to compete for workers.

With labour shortages prevalent across the country, the western province is targeting residents of Canada’s most expensive cities in a campaign to attract workers, making an affordability pitch it’s hoping will be too hard to resist.

“What did the Albertan say to the Torontonian? You’re hired,” reads one of Alberta’s ads in a downtown Toronto subway station.

The second phase of the Alberta is Calling campaign is making the case for why Torontonians and Vancouverites might want to relocate to the oil-rich province: cheaper housing, good pay and shorter commutes.

“I want to make a special shout-out to younger folks in the GTA and the greater Vancouver region, because they all have a dream, quite rightly, of home ownership,” said Kenney.

“That dream is alive and well in Alberta.”

According to the Canadian Real Estate Association, the average home price in Alberta was about $424,000 in August. In comparison, average home prices in Ontario and British Columbia were $830,000 and $911,000 respectively.

In Toronto and Vancouver, prices are well above the provincial averages.

The pitch comes as Ontario experiences the largest exodus of residents in decades. According to Statistics Canada, nearly 50,000 people left the province in the second quarter of this year.

Meanwhile, Alberta saw an influx of people entering the province, with more than 37,000 new residents.

University of Waterloo economics professor Mikal Skuterud says movement between provinces is good if it means workers are going to where they’re needed the most.

“We need competition,” Skuterud said, adding that employers should be competing for talent across the country, not just in the local communities where they’re based.

“We want workers to realize where jobs are plentiful and where wages are rising.”

Moffatt says although Alberta’s latest campaign might be more aggressive in its tone, other regions in Ontario have made similar pitches to Toronto residents.

As more Torontonians migrated out of the city over the years and into regions like Kitchener-Waterloo and St. Catharines, prices were driven up in those cities, he said.

“With the increase of work-from-home, there’s the potential for that to be turned into a Canadian-wide phenomenon,” Moffatt said.

That phenomenon has already played out in the Maritimes as Ontarians headed out East during the COVID-19 pandemic, opting for bigger homes at cheaper prices.

The influx of Ontarians pushed up home prices dramatically in historically inexpensive New Brunswick. Last year, prices went up by more than 30 per cent in the province.

As Canadians continue the search for affordable housing, Moffatt says local communities will have to be mindful of population growth and make sure they have the housing to accommodate it.

Back in Edmonton, Shah says the move to Alberta won’t appeal to everyone. Torontonians have to forgo living in the most populous city in Canada and Vancouverites would bid farewell to mild weather.

“If you like fast life and crowded places, Toronto is better than Alberta, obviously,” she said.

However, Moffatt said if the message lands with even a small fraction of people, it could mean a lot more new workers for Alberta.

“There’s probably enough people out there who are like, ‘You know what, I can stand an Edmonton winter if it means I can actually own a home.”’