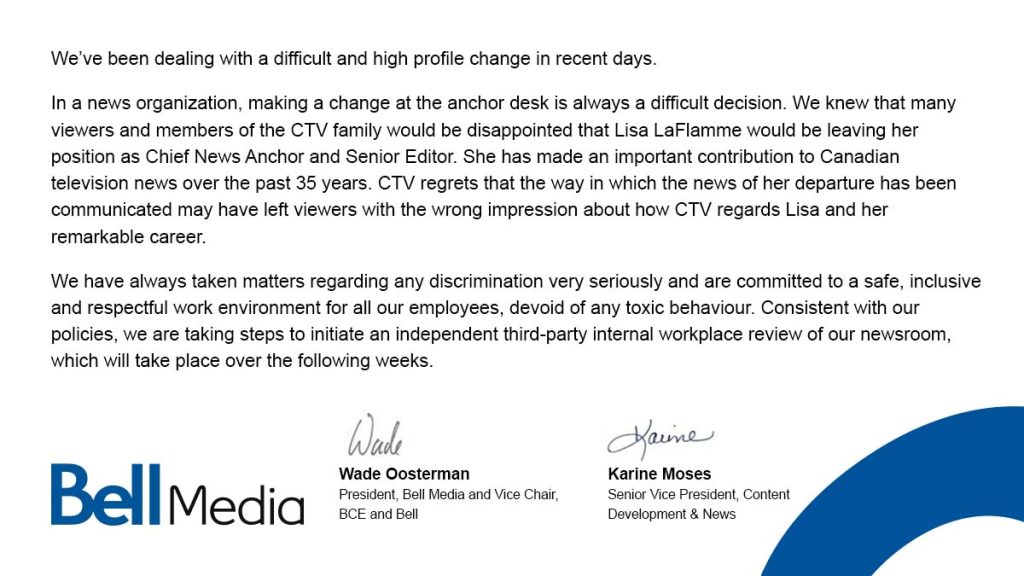 A screenshot of the statement issued by Bell Media.

Bell Media, stung by the flood of criticism over its dismissal of CTV News anchor Lisa LaFlamme, has announced it is conducting an external review of its workplace.

“We have always taken matters regarding any discrimination very seriously, and are committed to a safe, inclusive and respectful work environment for all our employees, devoid of any toxic behaviour,” reads the statement, signed jointly by Wade Oosterman, president Bell Media and vice-chair, BCE and Bell; and Karine Moses, senior vice-president, content development and news.

“Consistent with our policies, we are taking steps to initiate a third-party internal workplace review of our newsroom, which will take place over the following weeks.”

A statement from Bell Media. pic.twitter.com/4I1LapDYpj

It said it knew many viewers and staff would be disappointed in LaFlamme’s departure, and noted it was a difficult decision to part ways.

“CTV regrets that the way in which the news of her departure has been communicated may have left viewers with the wrong impression about how CTV regards Lisa and her remarkable career.”

The contrast between LaFlamme’s departure, unceremoniously shown the door at age 58, and the other high-profile Canadian anchors has drawn criticism of sexism. Her predecessor Lloyd Robertson stayed on until age 77 and was feted on air by prime minister Stephen Harper.

At the CBC, long-time anchor Peter Mansbridge said goodbye under his terms at age 68.

The new statement is more conciliatory than an earlier email sent to internal staff that pushed back on the narrative around LaFlamme’s departure.

In an email with the subject line “Setting the record straight,” obtained by the Canadian Press, Moses told staff she wanted to address some of the “false narratives” circulating in the media about the shakeup at Canada’s most-watched national newscast.