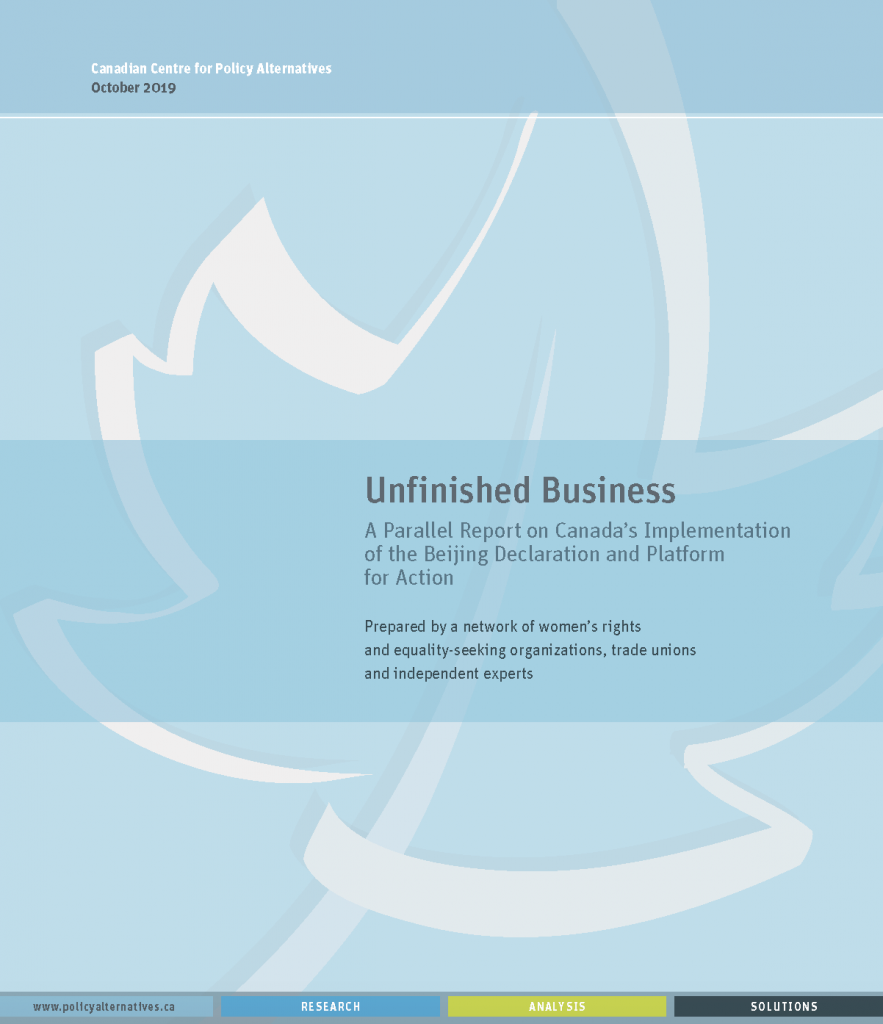 OTTAWA (CP) – Canada will be years past celebrating its tricentennial before the country can close the economic gap between men and women if things keep improving at the glacial pace they are now, a new report says.

“Years of effort to remove entrenched economic, cultural and social barriers to women’s progress are not achieving the results we all expected by now,” says the report, Unfinished Business, published Monday by an alliance of more than 50 groups working to advance equality and the rights of women.

The examination of how close – or far – Canada is from meeting the gender equality goals it signed on to in 1995 as part the United Nations Beijing Declaration and Platform for Action, which is reviewed every five years, shows “uneven progress” over the past five years.

That, said the report, is despite a renewed focus on feminist policies from the Liberal government.

“Unfortunately, all things are not equal, and the gaps are especially wide and persistent for marginalized groups of women in Canada.”

Ottawa submitted its own progress report to the UN this spring, where the Liberal government highlighted achievements like gender-based budgeting and the fact it passed legislation last year aimed at ensuring men and women get equal pay for work of equal value.

Still, the government noted many challenges remain, and committed to continue working on the issue.

The shadow report released Monday, which coincides with a meeting in Geneva to review progress on the 1995 goals, notes Canada has a persistent gender gap when it comes to economic security, even though women now outnumber men when it comes to post-secondary education.

The report says the proportion of women in Canada who have completed some form of education after high school has increased by 60 per cent since 1995, now accounting for about 64 per cent of women 25 and older, compared to about 49 per cent of men the same age.

“Progress in education, however, has not produced an equally steady level of progress in women’s economic security,” says the report.

The global gender gap index maintained by the World Economic Forum, which ranks 149 countries according to disparities between men and women in several key areas, scores Canada much lower on economic participation than in health and education.

The report notes that between 2006 and 2018, Canada reduced economic disparity, which includes participation in the workforce, income levels and pay equity, by just 0.2 per cent per year.

“At this rate, it will take 164 years to close the economic gender gap in Canada,” says the report.

That gap is wider for women with disabilities, First Nations, Metis, Inuit and immigrant communities, who the report also noted face higher levels of gender-based violence and poverty.

The gender pay gap drives much of that discrepancy. The report says that while Canadian women with full-time jobs earn more income than those in many other countries, they receive just 82 cents, on average, for every dollar paid to men.

Katherine Scott, a senior researcher with the Canadian Centre for Policy Alternatives, said unpaid labour, such as caring for children, as well as the fact that female-dominated jobs tend to pay less, can play a role in that disparity _ and a reason to tackle the problem in a systemic way.

She said a couple faced with the high cost of child care might decide to have the spouse earning the lower income stay home.

“Why are those choices set up the way they are set up?” she asked.

The review of the 1995 goals comes at a time when the administration of U.S. President Donald Trump has pushed the United Nations to walk back language on sexual and reproductive health rights because they can include references to abortion.

Suki Beavers, executive director of the National Association of Women and the Law, said there is no room for complacency.

“We are still having to fight,” she said. “We are still far from ensuring that women can experience equality in all the realms of our lives in the way in which we ought to.”