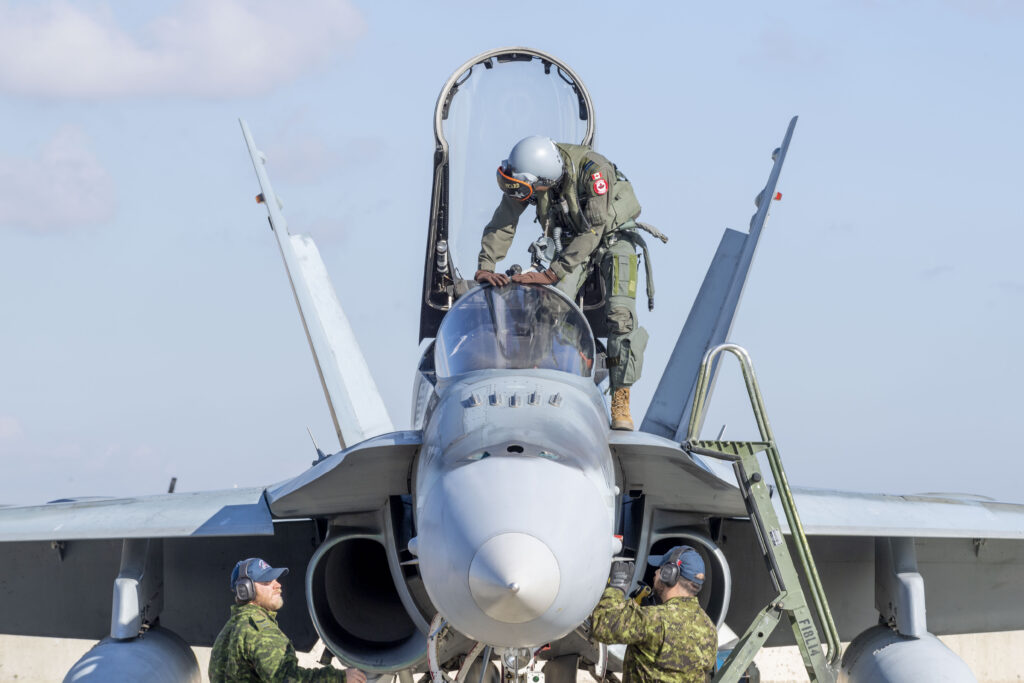 A CF-188 Hornet pilot exits the aircraft after a flight at the Mihail Kogalniceanu (MK) Air Base in Romania during Operation REASSURANCE, October 17, 2022. Photo: Corporal Eric Chaput, Canadian Armed Forces

The Canadian Armed Forces says it has received hundreds of applications from permanent residents interested in joining the military, but getting those prospective recruits into uniform could take up to two years.

Chief of the defence staff Gen. Wayne Eyre officially opened the military’s doors to all permanent residents in October, in direct response to an unprecedented personnel crisis that has left the Armed Forces scrambling for new recruits.

Defence Minister Anita Anand publicly announced the measure, which went into effect on Oct. 18, on Monday.

A permanent resident is someone who has been allowed to live and work in Canada after immigrating from another country but is not a Canadian citizen. Hundreds of thousands of new permanent residents arrive in Canada every year, but until last week only those who have training from a foreign military could apply to join the Armed Forces.

‘A bit of a suprise’

The military says more than 2,400 people submitted applications in November, a number that the commander of the Canadian Forces Recruiting Group described on Wednesday as unexpected.

“I’ll be honest with you, it has a bit has been a bit of a surprise to us as to how much uptake the permanent resident initiative has taken,” said Col. Nick Roby. “And we are obviously super excited about the opportunity.”

The number is especially notable when considering the military received about 4,000 applications over the same period from Canadian citizens, which itself was the largest number in a single month this fiscal year.

1 in 8 applicants pan out

So far about 26,000 people have applied, but typically only about one in eight applicants become enrolled as a full recruit.

While many are weeded out after failing aptitude, medical and security tests, officials say the majority end up voluntarily withdrawing.

The military’s excitement is also being tempered by what Roby acknowledged will be specific challenges related to security screenings, which involve checking each applicant’s background before allowing them to put on a uniform.

It currently takes about eight months to properly vet Canadian citizens who apply for the military, and that has been flagged as a significant obstacle in getting more people into basic training.

Roby said the wait for permanent residents is expected to be even longer given that many of them have lived outside Canada for long periods of time, which adds more complexity to verifying their backgrounds.

“It is the exact same process,” Roby said. “Having said that, we would expect ? the process will take longer. Every file is reviewed on an individual basis.”

To speed up the process, Roby said the military hopes to partner with Immigration, Refugees and Citizenship Canada to share information collected by immigration officials when prospective recruits first applied for permanent residence.

While that would require agreement from the prospective recruit, Roby said: “This work with IRCC is critical to the success of us enrolling permanent-resident Canadians quickly, or a lot quicker.”

The military has been dealing with an unprecedented personnel crisis that has included successive shortfalls in recent years when it comes to adding new recruits.

Recruitment cratered during the first year of COVID-19 as the military shuttered recruiting and training centres. The result: only 2,000 people were enrolled in 2020-21 — less than half of what was needed.

Nearly 4,800 recruits were enrolled the following fiscal year as lockdowns and restrictions were eased, but officials say they are getting about half the number of applicants needed per month to meet the goal of adding 5,900 members this year.

That shortfall is expected to exacerbate the current personnel shortage. About one in 10 of the military’s 100,000 positions is currently unfilled, which senior leaders say is affecting their ability to conduct operations at home and around the world.

While the Canadian Armed Forces has debated opening its ranks to permanent residents for years, Roby said the current personnel crisis and the push for more diversity were ultimately responsible for the decision.

Defence analyst Stefanie von Hlatky, of Queen’s University, said while the move has the potential to boost recruiting efforts and diversity in the military, application processing will be a key challenge.

“Recruitment timelines in the military are already longer than in other sectors, given the medical and security eligibility requirements,” she said. “It will be important to prioritize the efficient processing of files with this new category of recruits.”

While fellow defence analyst Jean-Christophe Boucher of the University of Calgary suggested there could be pushback from some within the ranks and from veterans, “my sense is this really is kind of a come-to-Jesus moment” for the military.

“So it’s either we do that or we’re screwed. Sometimes institutions don’t change until they face that kind of existential threat.”