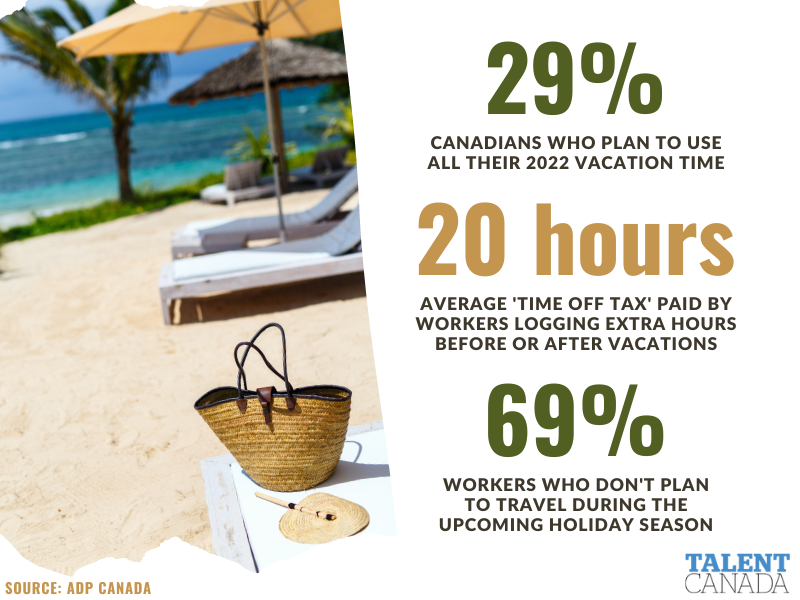 Canadians are getting somewhat better at taking their paid vacation days, but less than one-in-three (29 per cent) will use all their time by the end of the year, according to a new survey.

That’s up two percentage points from last year, but still far below pre-pandemic levels. In 2019, nearly half of workers (48 per cent) took all their paid vacation time, according to the survey conducted by Maru Public Opinion for ADP Canada.

The ‘time off tax’

ADP found the average Canadian worker is paying less of the so-called “time off tax.” That’s when staff log extra hours before and after vacations so they don’t fall behind in work. Nearly one-third (31 per cent) said they haven’t worked any extra hours before or after taking a one-week vacation.

Those who clocked extra time reported an average of 20 additional hours to prepare and return from their vacation. This is down one hour from 2021, and 14 hours less than the 2020 average, which was the highest tax reported, it said.

“The data from our annual time off tax survey indicates a promising shift in Canadian workers taking back their time to disconnect from work,” said Heather Haslam, vice-president of marketing at ADP Canada. “However, it’s important for employers to acknowledge that vacation levels continue to fall below pre-pandemic levels and external factors can impact Canadians’ ability to take time off.”

Most working Canadians (69 per cent) said they will not travel during the holiday season. That’s down seven percentage points from 2021.

More than half of respondents said inflation is playing a role in their holiday travel plans.

Haslam said it was promising to see a decrease in the the amount of time off tax, and also to see a rise in the number of workers who are taking their full vacation time.

“2023 marks an opportunity for employers to equip employees for wellness by encouraging workers to recharge and disconnect — promoting engagement and productivity,” said Haslam.

The survey was conducted Nov. 25-27, 2022, among a random selection of 811 Canadian workers who are Maru Voice Canada online panelists.