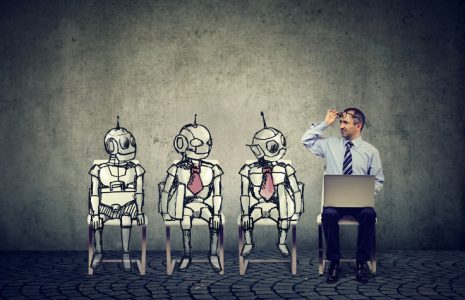 Although some robots resemble humans, most do not and are instead specifically designed to autonomously carry out complex tasks. (Getty Images)

Last month, unemployment in Canada reached a record low of 5.2 per cent. Alongside low unemployment, many industries saw — and are still seeing — a worker shortage, with the number of job vacancies in Canada reaching 900,000 in January.

Both of these things are good for workers, right?

Prospective employers, desperate for new recruits, are “throwing cash at applicants.” Many lower wage jobs have even seen an increase in pay, like the 20 per cent wage increase for truckers recently announced by Walmart.

The pandemic is partially responsible for this labour shortage, as the immigrant workforce supply dried up throughout the lockdown. However, the aging population in Canada has also been a factor.

Is automation the answer?

The solution to the worker shortage proposed by the Business Development Bank of Canada’s chief economist is increased automation.

Advocates and critics have long argued over the impact of automation on employment.

Advocates believe automation can be used to perform mundane or physically demanding jobs, freeing up workers to learn new skills and take on better jobs.

Recent research from the University of Pennsylvania supports the argument that automation creates jobs. The study found that investing in robots boosted the efficiency and quality of work while reducing costs, increasing productivity and creating more job opportunities. Similarly, a 2020 report from Statistics Canada also found that companies that used robots hired more human workers.

The impact of automation on work can only be assessed over the longer term and according to whether vacancies are created by those leaving their jobs or retiring and whether the activities of those departing are fully automated.

But critics have argued that automation and advancements in technology create an hourglass economy where opportunities only exist for highly and lowly skilled workers, leaving less work for semi-skilled workers who must either increase their skills or take lower-skilled (and waged) work.

A common example used to illustrate the detriment of technology to employment is the case of Blockbuster. Once a titan of physical video rental with 60,000 employees, Blockbuster was unable to compete with Netflix’s (who only had around 2,500 employees) new streaming services and filed for bankruptcy in 2010. Netflix automated the video rental business while Blockbuster retained its physical labour-intensive model until it was too late.

The reason why automation hasn’t had a more detrimental impact for workers can be explained by two factors. Firstly, employees are also consumers. To reduce employment is to reduce the market for products, which is bad for manufacturers and capitalism itself.

As a management professor, I often use an incident that supposedly occurred between Henry Ford II and Walter Reuther, leader of the United Automobile Workers trade union, to illustrate this point.

Secondly, firms can easily resolve issues with new technology by employing human workers to take over. Take for example, the failure of automation in the fast food industry and the tale of Flippy, the burger flipping robot, that lasted a single day, only to be replaced by human workers when it couldn’t keep up with demand. Such instances reveal the way in which workers offer an easy substitute for automation that fails to cut the mustard (or flip the burger).

The current situation is different because employers are struggling to source workers. The reliance on automation is becoming a necessity, rather than a source of competitive advantage. Moreover, the labour shortage means that turning to workers as a substitute for failing technology is a less viable strategy, so firms are more likely to persevere in introducing new technology.

The future of automation

It has been argued that about half of the activities undertaken by workers could be automated by 2055. This does not mean that all of these activities will be automated. Nor does it mean that 50 per cent of jobs will necessarily disappear in the next 30 years without other jobs emerging as a result.

However, current circumstances, especially the shortage of workers, is a powerful motivation for automation. We could see a significant increase in automation use in the workplace over the next few years.

The challenges of filling worker vacancies may be good news for workers now, but the longer terms consequences still remain to be seen.

Geraint Harvey does not work for, consult, own shares in or receive funding from any company or organisation that would benefit from this article, and has disclosed no relevant affiliations beyond their academic appointment. This article is republished from The Conversation under a Creative Commons license. Disclosure information is available on the original site. Read the original article: https://theconversation.com/companies-are-mitigating-labour-shortages-with-automation-and-this-could-drastically-impact-workers-181017

Related
The robot revolution is here: How it’s changing jobs and businesses in Canada
Robots are coming and the fallout will largely harm marginalized communities
Paid sick days matter even more than you might think
From the editor: Through COVID-19, leadership has become dangerous work
Tags