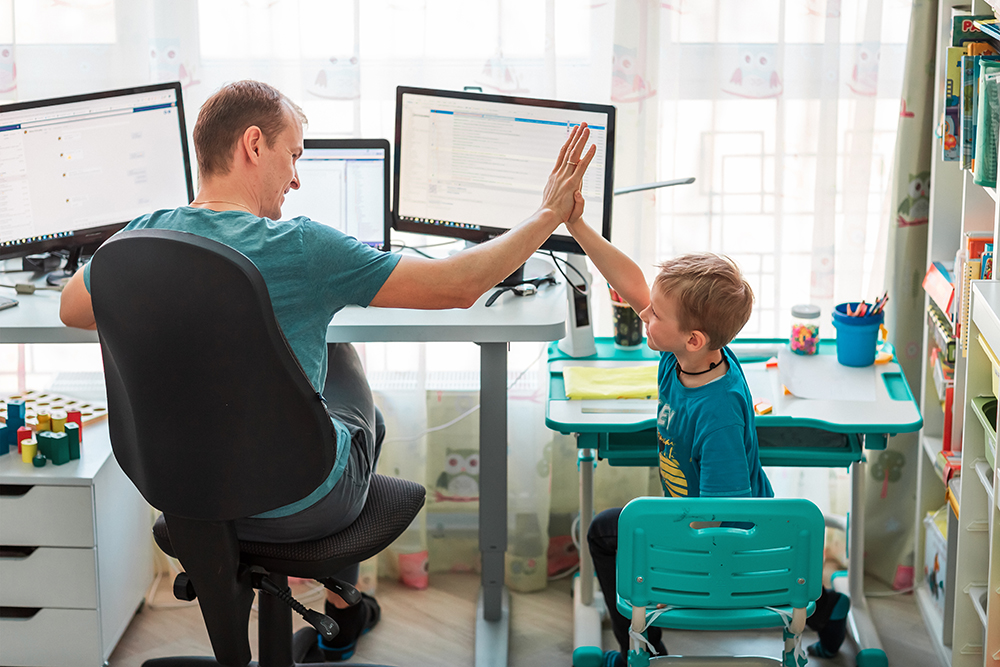 Eligible employees can claim a deduction if they worked from home more than half of the time over at least four consecutive weeks in 2020 due to COVID-19. (len44ik/Adobe Stock)

TORONTO — When Andrea MacDonald begins working from home each morning, keeping her daughters busy is rarely a worry.

Grace, 9, and Rose, 5, have spent the last two months being read Dr. Seuss books by Twitter founder Jack Dorsey and learning about literary terms through the Harry Potter series.

Both are part of Camp Twitter, a virtual program the company runs for children of its employees, which Twitter Canada’s tech, telecommunications, media and entertainment lead says has been “a gift.”

The offering is one of several dreamed up by companies to help Canadian employees juggle their professional and parenting duties, while working from home and having limited camps, daycare, school or child care options to lean on during the COVID-19 pandemic.

At insurer Sun Life Financial, North American staff have access to a virtual summer program for kids, are being encouraged to take their lunch so they can spend time with their family and are seeing their number of personal days doubled to 10. They can also tune into webinars with psychologists who can answer questions about parenting and family-oriented sessions where guests like NHL star Max Domi talk about overcoming challenges.

Meanwhile, Canadian workers at Microsoft are eligible for 12 weeks off under the company’s new Paid Pandemic School and child care Closure Leave program.

Other companies have subsidized child-care costs and been flexible with time off for parents on kid duty.

Experts say such child-care solutions are key to keeping women in the workforce because they statistically shoulder most of the responsibilities associated with raising children.

The pandemic has exaggerated that trend. Statistics Canada’s latest labour force survey showed that mothers with children under 18 were more likely than fathers to work less than half their usual hours in June.

“Who is going to be the one who takes time off if the school has to shut down because there’s been an outbreak?,” asked said Jennifer Hargreaves, who runs Tellent, an organization that helps professional women find flexible work opportunities. “Who’s going to be the one to finish their days at 3:30 p.m. to pick up the children if we don’t have after-class music or swimming lessons after school anymore?

“Typically, it will be the primary caregiver, the person with a more flexible job or the person with the lower income. We know from the gender pay gap that tends to be women.”

Women may leave their jobs if companies don’t address child care, she says — and the longer mothers are away from the workforce, the harder it is for them to later return.

A July study from the Royal Bank of Canada revealed that the pandemic has pushed women’s participation in the labour force down to its lowest level in three decades.

About 1.5 million Canadian women lost their jobs in the first two months of the pandemic and RBC says women accounted for about 45 per cent of the decline in hours worked over the downturn, but will only make up 35 per cent of the recovery.

How fast women’s employment rebounds depends a lot on the reopening of schools and access to child care.

So far many businesses have been tolerant about kids popping up on Zoom or allowing parents to modify hours their hours to be more available to their children, or take impromptu breaks to tend to temper tantrums.

“A lot of employers will say ‘do what you need to do,’ but parents won’t take them up on it because they feel guilty or they don’t have the time to even think of it,” said MacDonald.

The beauty of Camp Twitter, she said, is that it goes beyond simply being lenient or otherwise relying on the discretion of individual managers.

Their kids stay entertained all day with live educational classes and virtual sessions filled with activities like cooking, yoga and music. And parents have access to webinars from psychologists and health experts.

At the MacDonald’s, Rose gets one-on-one sessions with a teacher helping her learn to read and Grace can mix her love of the wizarding world with lessons on storytelling concepts like setting and character development.

“Harry Potter class was really really fun,” said Grace. “We talked about the books and at the end of the class, we did quizzes on what we learned.”

Meanwhile at Slack Technologies, a San Francisco-based software company that was founded in Vancouver, caregivers have been offered unlimited time off and Canadian staff can receive child-care credits.

Parents and soon-to-be-parents also receive six free virtual sessions through a parenting app and are now being offered the chance to work from home permanently.

Slack is trying to remove the expectation that work necessarily happens between 9 and 5, said Robby Kwok, the company’s senior vice-president of people.

“We believe that successfully adapting to remote work is about much more than the tools and technology our employees work on — it’s really about the culture and norms they work with.”

She works from 5 a.m. to 8 a.m. on weekdays and all day on Saturdays. While she’s working, her husband takes over the child care responsibilities, which she handles from 8 a.m. and onward most days.

In the past, she tried to parent and complete work simultaneously and said it’s a “recipe for disaster” unless you block separate time for each duty and have a boss that supports your family needs.

“If you can create a culture where that’s acceptable, where your employees can do that and they can feel trusted to get the work done, that’s where employees are really going to thrive.”