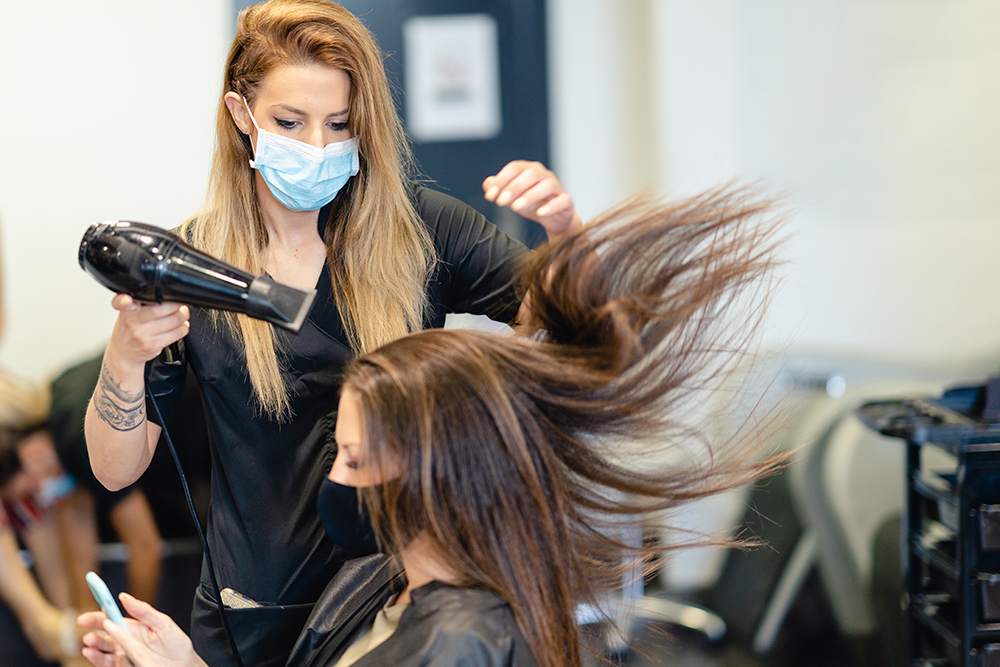 Bethany Smith loved her job as a barber.

Smith loved going into work every day and seeing a new client every half-hour, visiting with regulars who would come back often for a haircut.

But when the pandemic hit, Smith was temporarily laid off from her job. When the time came to go back to work, she couldn’t — with immunocompromised kids and mom, she decided to stay home and take care of her family.

Smith mom said going from being a busy working mom to a stay-at-home mom running a homeschool for her three children has been hard.

“I’ve actually really been struggling. I’m happy I am where I need to be right now, but it’s very different,” Smith said.

Smith worked as a barber for two years. Before that, she ran a day home and worked in an optometrist’s office.

Now, she stays home and helps her seven-, nine- and 10-year-olds in their education. She barely leaves the house because she does not want to risk contracting COVID-19.

“It’s different. I’m trying to find the joy in it,” Smith said.

Smith is not alone in stepping away from her job to care for her family.

Data shows that during COVID-19, the number of women in the Canadian workforce has fallen to low not seen in decades.

A report from RBC Economics released in July highlights the impact on women’s employment and called the impact “specific” and “unprecedented.”

Women have borne the load of child-minding responsibilities as schools and daycare centres closed, which in turn has impacted Canada’s overall economic picture.

According to the report, women’s employment hit an unprecedented low with 1.5 million women in Canada losing their jobs in the first two months of the pandemic. In April, women’s participation in the workforce dropped to 55 per cent, a level not seen since 1986.

Prior recessions have impacted men more than women, the report said, but this recession hit women, due to women participating in service jobs like restaurants and hotels, which were hit harder by economic shutdowns. Women are also taking over the child care duties in the home and the wage gap is not helping matters.

The report said because women, on average, work fewer hours and earn lower hourly wages than men, the federal CERB funding grant, which was slated to replace income for those off work, was more effective in protecting men than women.

Forty-seven per cent of women who were laid off between February and June typically earned $2,000 per month or less, meaning their income was fully replaced by CERB and the government reported that of the 8.25 million applications for CERB between March and June, 48.4 per cent were from women.

According to recent data from Statistics Canada, in 2018 women earned on average 87 cents for every dollar earned by men.

“As a result, lower and middle-income mothers may be incentivized to stay home and care for their children while collecting CERB, rather than bearing the cost of daycare when centres reopen. And those mothers who are able to work from home will be likely to work fewer hours while juggling child care and Zoom meetings,” the report read.

While Smith stays home, her husband works as a police officer to financially support the family. Smith said his job pays more than hers, although the family needs both incomes, but the family is “getting by” right now while they wait out the pandemic.

“His job is more important. They need him at work. He has a really good job,” Smith said.

The decision for Smith to stay home while her husband continued to work outside the home was “really easy.”

“It wasn’t really even a discussion. It was just that I needed to stay home,” Smith said.

Kristin Rodier, who works as instructor of philosophy, women’s and gender studies, cultural studies and political science at multiple universities, said trying to balance work and child care has been “completely unmanageable.”

The professor had to leave her permanent position in June because she needed to care for her five-year-old son.

Rodier and her husband both work full-time jobs, but the pandemic forced them both to work from home, and their son, who spent most of his day in daycare, was not able to attend school anymore. It became very difficult to do her work and care for their son.

By June, the situation had become so unmanageable that Rodier, who had more flexibility with her job, had to take a new position so she could take care of her son.

“It was not manageable for our family any more, so I had to go to a permanent job, but a flexible job, that was reduced hours and reduced pay,” Rodier said.

“You take less wage for flexibility.”

Rodier would be able to pick up contract work, but right now she has to turn down those opportunities because she is already stretched thin with work and child care.

“(In) a normal time, I would have three or four contracts on the go. And now I’m like, one contract and I’m drowning, on top of my job,” Rodier said.

When child care opened again in the summer, her son went back, but with the need to isolate with COVID-19 symptoms or COVID-19 exposures, their child care situation is unpredictable.

Right now, their son is at home because of a COVID-19 exposure.

In the federal government’s recent fiscal update, they promised the recovery from COVID-19 would help support women re-entering the workforce.

One of the cornerstones of the fiscal update was a promise to create a national child care system, with full details slated to be released in the 2021 budget.

The government is proposing investing millions of dollars into the program, with $420 million in grants and bursaries to help provinces and territories train and retain qualified early-childhood educators.

Finance Minister Chrystia Freeland said the need for a national system was highlighted by COVID-19 after more women than men were forced to stay home and take care of their children, because of a lack of child care spaces and the cost of child care.

“COVID-19 has caused a she-cession, rolling back many of the hard-won gains women have worked for over past decades,” Chrystia’s economic statement read.

“Canada cannot be competitive until all Canadian women have access to affordable child care.”

Rodier said the news for a national child-care plan is welcome. The mom said she decided to only have one child because child care is so expensive and unpredictable.

Choosing between her family and her career has been “soul crushing.”

Rodier said it feels like she can’t do both well and she was already working a second shift of child care after working a full day from her paid employment.

“We were already working our second shift. And so then this was like, giving us back another shift,” Rodier said.

“I just don’t know who this is sustainable for.”

Even before COVID-19, many family’s child care plans were hanging on by a thread, Rodier said.

When her family was considering having another child, Rodier said with both parents working, it would be over $2,000 to have two kids getting child care, which was just too expensive to pay for. In the end, they decided to have one child because of the costs.

Rodier said for some people having a national child care plan could help accelerate their return to work, but in the end, the pandemic needs to end before women will be able to safely and comfortably go back into the workplace.

“It’s not going to get better until the pandemic is better.”