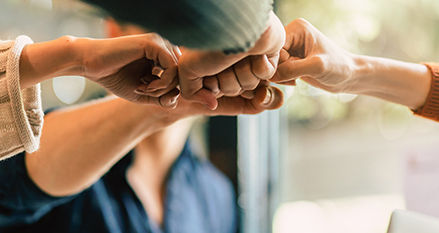 Real workplace change is built on the foundation of communication. (whyframeshot/Adobe Stock)

If you’re in a leadership position — at work or in the community — you make decisions and oversee decision-making processes. Often it’s best to consult the people you are leading to reach a group decision.

Voting may seem the quickest route to a resolution, but it isn’t the best way to enrol everyone. Worse, voting can silence voices and thwart creativity.

Slowing down your decision-making process and listening deeply to the people in your group also increases how much you care for them and how much you view them as people.

As a professor of psychology, neuroscience and behaviour, in the Rutherford lab at McMaster University, my students and I study the perception of social categories.

My students and I are interested in learning how people can increase their circle of moral concern. When people behave in ways that harm others, they may not be including those others in the circle of people they care about. The deep listening involved in formal consensus decision-making draws people into that circle.

Expertise in the group

If a problem is difficult, if there is expertise in your group that can inform and improve the decision at issue, or if a solution is going to be expensive, it’s a good time to consider a broad, robust decision-making process.

Perhaps the most critical times to use a durable consensus decision-making process are when a decision is going to be controversial, or if the success of the decision relies on enthusiastic acceptance.

I suggest a specific model called formal consensus decision-making, in which no proposal is adopted until every concern is heard, understood and addressed. This model, complete with charts, roles and procedures, was developed by Food Not Bombs, a volunteer organization dedicated to non-violent social change.

In the Quaker religion, Quakers do not vote, but
rely on “communal discernment” — listening for a truth that emerges when people listen to one another and together “in the Spirit.”

Building consensus in a university

More than a year ago, I became chair of McMaster University’s department of psychology, neuroscience and behaviour. Since then, the department has not voted once.

My department uses formal consensus decision-making, and instead of policies, we have standard operating procedures. Where other departments have policies, bylaws and governance documents, we wanted something different, because creating bylaws can be contentious, enforcing bylaws can be worse and bylaws can’t anticipate unanticipated situations.

Instead, we now use a living document simply called, “This is how we do it.” This document was not ratified by vote. It was reviewed by the entire department in a process where we analyzed how we currently did things and how we hoped to change — a “gap analysis” process.

If you’re wondering how to get a group to agree to any kind of governance document without voting, let me tell you the story of how we ratified our “This is how we do it” document without taking a single vote.

First, we created a core values statement, and today we measure all our practices and procedures against it. We started our core-values exercise in January with four large group meetings: faculty, staff, post-doctoral research fellows, graduate students and undergraduate students.

Representatives from each group met with our facilitator, who distilled the data she collected during those sessions, specifically the values that had been nominated in each meeting for every domain we discussed.

Finally, a small working group including representation from each of the large groups met to draft our core values statement. This draft went to the entire department with a request for feedback. After a final meeting of representatives, the core values were finalized.

Next, we had a faculty retreat to develop our “This is how we do it” document. In small groups and all together, we examined and discussed the fit between our department’s core values and this document.

We used notes from all discussions at the retreat to update the document and circulated it to the department for further comment. Now we have our way forward.

In Canada, some major organizations are taking more inclusive and deliberative decision-making seriously. There are even two governmental bodies in Canada that have a consensus style of government, Nunavut, and the Northwest Territories.

Voting can silence voices. You may have been in a meeting at some point when a disagreement broke out and someone angrily suggested, “Let’s take a vote!”

All too often, that can be a way to silence dissent.

Why not try consensus at home, in your workplace, your church or faith community or your running club?

Related
How good governance can stop ‘bro behaviour’ at toxic companies
Why tech leaders are key to a post-pandemic workplace
A better way: Leadership nudges through COVID-19, and beyond
Invest in developing your people leaders to retain talent