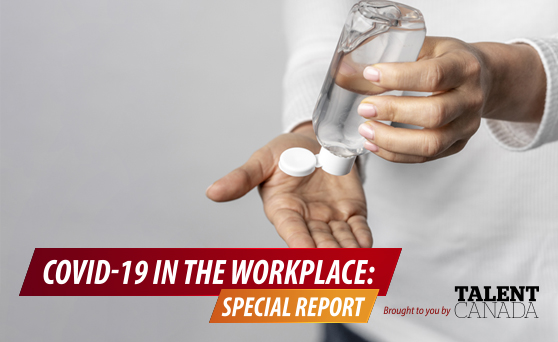 Half of Canadian employers have laid off staff because of the COVID-19 pandemic, according to a new survey by Talent Canada magazine.

The online survey of 182 employers, which took place from April 3 to April 10, found that the cuts have been wide and deep at many organizations. A total of 55.1 per cent of respondents had laid off half their staff or more, including 16.3 per cent who had laid off all their employees.

“The data provides a snapshot at how the pandemic has affected employers through March and into the early weeks of April,” said Todd Humber, group publisher at Annex Business Media in Toronto.

“The job cuts have come fast and furious, and many of the leaders who participated in the survey expect COVID-19 to stick around for a while and impact their business for six months or more.”

If you have laid off staff, what percentage (approximately) of your workforce has been let go to date? 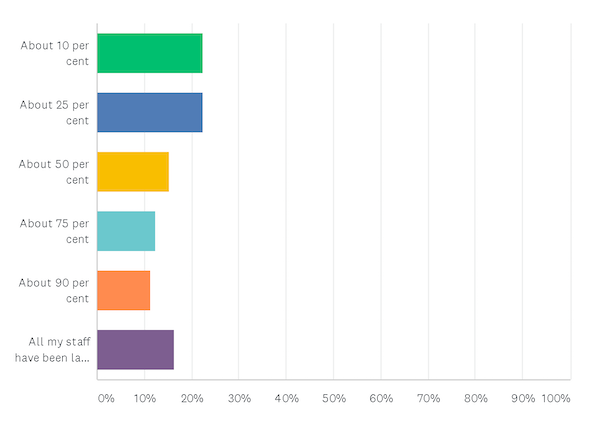 Nearly one-half of respondents (43.6 per cent) expect their businesses to be impacted for six months or more. But nearly as many (40.3 per cent) feel things may improve in the next three to four months. 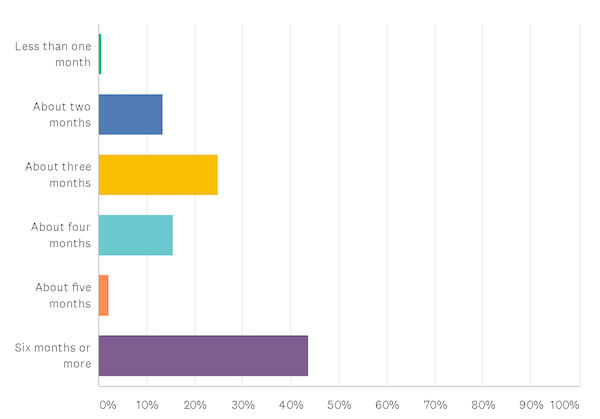 The impact on business

A run through the responses to the question “Has your business declined during the pandemic?”

“It’s easy in all the chaos to lose sight of how striking those numbers are,” said Humber. “More than one in five respondents to the Talent Canada survey have seen a 75 per cent plus drop in business. It shows just how much some employers are hurting.”

The federal government has unveiled some aggressive programs in the last couple of weeks, including the Canada Emergency Wage Subsidy (CEWS). That program will pay employers 75 per cent of a worker’s wages — on the first $58,700 a worker normally earns — for up to 12 weeks. That works out to $847 per week, and it will be retroactive to March 15. Companies that lost 15 per cent of their revenue in March will be eligible. The criteria for April and May will be a 30 per cent drop in revenue.

The survey graded Ottawa’s performance on its response to COVID-19.

Less than one-quarter (23.7 per cent) said they were not satisfied with how Prime Minister Justin Trudeau’s government has responded for employers.

A slightly larger percentage (27.6 per cent) said they were satisfied while nearly one-half (48.7 per cent) were on the fence.

“Though the fine points of the CEWS were worked out during our survey period, employers seemed optimistic about the program,” said Humber. “The more employees a company can keep on the payroll, the easier it will be to hit the ground running when the economy start to open up again.”

About one in 10 employers (10.2 per cent) said they were going to recall workers as soon as the CEWS was in place. Nearly one-half (47.2 per cent) weren’t sure, as they were still studying the announcement and almost the same number (42.6 per cent) said Ottawa’s wage subsidy has not changed their decision about laying off workers.

This is a preliminary review of the survey data. More information will be released shortly and full results will be published in the spring issue of Talent Canada. Talent Canada is a publication aimed at HR and the C-suite that makes the business case for investing in people. Visit https://www.talentcanada.ca/subscribe/ to start your free subscription today.