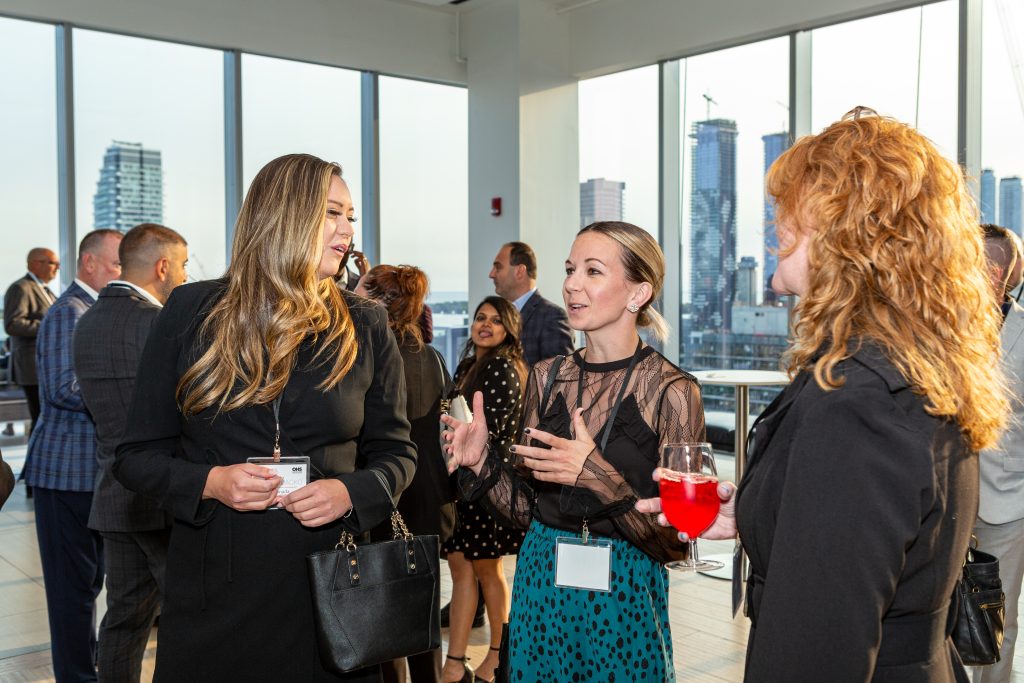 More than200 business leaders, HR professionals and safety professionals gathered at the Psychologically Safe Workplace Awards and OHS Honours on Sept. 15 at the Globe and Mail Centre in Toronto.

As the pandemic dragged on, and lockdowns and isolation began to take a toll on workers, Christine Vigna saw something remarkable happening at her organization.

On company chatrooms, people began to open up about how they were struggling with loneliness and other mental health issues.

“There were so many employees who jump on and say, ‘Hey, I’ve been there too. Give me a call. I’m going to come sit in your driveway, and we’ll have a socially distanced coffee or let me bring you lunch,’” said Vigna.

It was the fruition of years of hard, deliberate work in creating a psychologically safe workplace.

“It is a place where it’s OK to put your hand up and say, ‘I don’t feel great today and I need some help.’ And that, to me, was one of the most incredible moments I’ve had as a leader,” said Vigna, the chief people officer at Dejero — which just won Gold for the second year in a row at the Psychologically Safe Workplace Awards.

But she cautions this culture change can’t happen overnight. The best way to describe the path is a “journey,” she said.

While mental health has risen to the top for many organizations during the pandemic, they need to be patient and persistent if they’re going to really move the needle, she said.

“You can’t just all of a sudden say, OK, this is a space that we talk about mental health,” said Vigna. “You have to build that trust in your environment.”

Dejero started down the psychological safety road about six years ago when it joined the Canadian Mental Health Association’s Not Myself Today campaign. That really opened the door, which the company stepped through with a lot of training support.

It started with leadership, so they were equipped to spot people who might be struggling and to have effective conversations.

“It was how to listen, and just be available for folks,” she said.

Then, the company put its employees through training — not just to help colleagues, but also friends and family members. That included frank discussions and information on what to do if they suspected someone might be a danger to themselves.

It was a slow build to show that the workplace was truly a safe space to talk about mental health. For example, every week the company has a Mental Health Mondays post on its internal intranet.

“We post an article, an activity, a video, e learning opportunity — something to do with mental health,” said Vigna.

These passive posts will often generate 10 to 20 likes and comments. It’s all about providing constant reminders of the importance of prioritizing mental health, she said.

Employers also need to be willing to pivot and respond to feedback from employees once the door has been opened. For example, Dejero heard from its staff that the people answering the phone at their EAP provider weren’t trained to take calls from someone in a crisis.

“They’re more like a dispatcher in the sense that they help pair you with an appropriate professional who can then support you,” said Vigna. “So we changed our EAP provider to folks who are actually trained in mental health. They’re all medical professionals who take that first call.”

Dejero also invested heavily in its benefits package, doubling the amount employees and family members can spend annually on mental health practitioners. That too was done in response to employee feedback that the old plan wasn’t providing adequate coverage for long-term assistance.

Nobody on the management team batted an eye on that investment, she said.

“Everybody understands that when your employees are well — and that means physically well, mentally well, financially well — they are happier humans,” she said. “And so that is the ROI right there. If you help support them, amazing things happen when we can show up as the best version of ourselves. So it wasn’t even a conversation.”

The company also made other tweaks, like ditching the term “sick day” and replacing it with “wellness day.”

“That’s because you could be physically unwell, mentally unwell, you could just need a day to be well,” said Vigna. “Whatever that is, we just make sure that the time is available.”

There are so many upsides to tackling mental health head on, she said, but one of the big ones is that employees feel safer taking risks.

“We’re a technology-based organization, so that’s huge for us,” she said. “Because you have to innovate to stay ahead of the market. And if folks don’t feel comfortable taking risks, they’re not going to innovate. That’s been a huge advantage for us.”