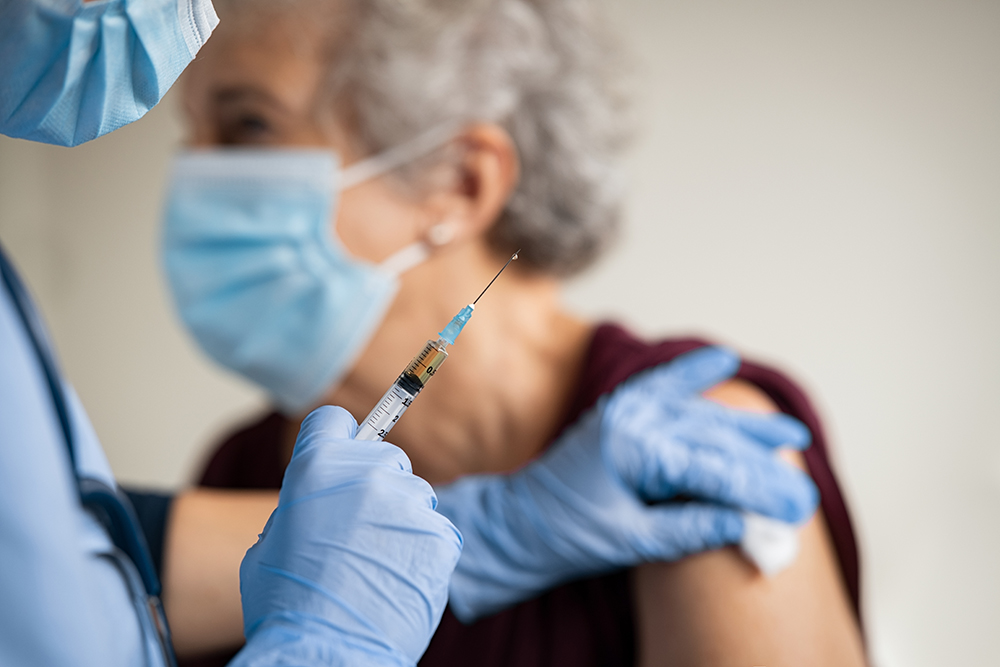 The federal government will consider whether to include booster shots in the next version of the COVID-19 vaccine mandate for its workers, the Treasury Board said as it reviews the rules.

The government must review the need for the policy, which currently requires federal public servants to get two doses of the COVID-19 vaccine or face unpaid leave, after six months.

That timeline runs out this week and while Treasury Board has consulted with unions over the last several weeks, the Public Service Alliance of Canada says it is in the dark about which direction the government will go.

“They have said, ‘You will see a renewed policy on April 6,'” Chris Aylward, national president of the union, said in an interview.

While the review could deem the mandate is no longer necessary, the government could also opt to expand it to encourage more members of the public service to get a booster shot.

“Any decisions will be based on science and the advice of public health officials,” Mona Fortier, president of the Treasury Board, said in a statement Monday.

As it stands, any worker in the core public administration, as well as the RCMP, must attest that they are fully vaccinated or risk being put on leave without pay.

The policy applies even to employees who work from home.

The policy document states the goal of the mandates is to protect employees, their colleagues and clients against COVID-19, and boost vaccine rates across the public service.

Fortier confirmed last week the definition of “fully vaccinated” is also being considered as part of the review.

More than 98 per cent of federal public workers have attested that they are fully vaccinated against COVID-19 with two doses as of March 28.

If the definition of fully vaccinated is changed, workers may need a booster to keep their pay.

Vaccination rates in the general population are similarly high, at about 90 per cent for those 18 years or older as of March 27. But uptake of boosters has been slower, at just 57 per cent.

Approximately 2,690 workers, representing about one per cent of the federal workforce, requested some kind of accommodation in the last six months.

Unions have pushed back on the vaccine mandate ahead of the six-month review.

The Professional Institute of the Public Service of Canada urged the government to determine when the policy will no longer be needed, given the high vaccination rate across the country.

“As provinces ease restrictions, the employer must do the same and allow members on Leave Without Pay (LWOP) to come back to work,” the PIPSC said in a statement.

PSAC recently filed a grievance against the existing policy on behalf of all members who have been put on leave without pay because of their vaccination status.

Putting the unvaccinated on leave without pay is harsh, the union argued, and can be considered disciplinary and without cause.

The union said at the time the vaccine mandate for remote workers constituted an abuse of management, since people with little prospect of returning to physical workplace posed no reasonable threat to health and safety.

The government has made accommodations for people on certain medical, religious, or other grounds protected by the Canadian Human Rights Act.

The six-month review comes as provinces have begun lifting public health restrictions, including vaccine mandates, across the country.

While the massive Omicron wave that washed over Canada in January and February has just receded, the country is likely already in the midst of a resurgence, chief public health officer Dr. Theresa Tam reported Friday.

Over the last several weeks she’s suggested Canada is in a “period of uncertainty,” and has emphatically advocated for people to get up to date on their vaccinations to protect themselves against severe disease.

In general, though, Tam said policy-makers are moving away from mandates for booster doses.

“We want Canadians to want to get it, because it makes sense from a serious outcome perspective,” she said at a briefing on March 18.