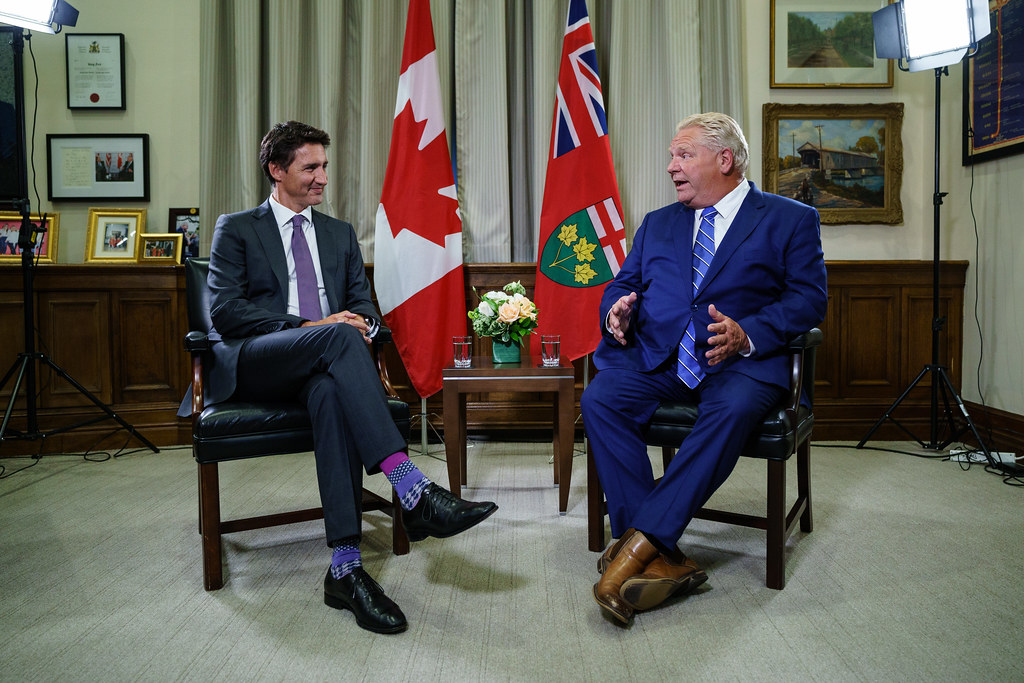 Ontario Premier Doug Ford backed down Monday on controversial education-worker legislation that includes the notwithstanding clause, saying he’s willing to repeal the law — but only if the workers end a walkout that’s shut hundreds of schools.

Days after the premier said he had “no choice” but to enact a law that imposed a contract on 55,000 education workers and banned them from striking, Ford said he is willing to repeal the legislation if the Canadian Union of Public Employees shows “a similar gesture of good faith” and stops its strike.

The premier described the government’s offer as “a massive olive branch.”

“I desperately hope that CUPE shows the same willingness to compromise as we are today. I hope they hear my plea to keep students in class, but that’s not something I can guarantee you.”

The government’s legislation included the use of the notwithstanding clause to guard against potential constitutional challenges. The clause allows legislatures to override parts of the Canadian Charter of Rights and Freedoms for a five-year term.

Ford said Monday he understands his use of the notwithstanding clause is controversial, but he would “absolutely not” have done anything differently in the education worker dispute in hindsight.

Prime Minister Justin Trudeau last week called the pre-emptive use of the notwithstanding clause “wrong and inappropriate” and Ford on Monday criticized Trudeau for those comments.

“It’s very disappointing the prime minister is being selective within certain provinces about his concerns of overturning the notwithstanding clause,” Ford said.

The latest developments come as CUPE, the provincial government, parents and students are awaiting a decision by the Ontario Labour Relations Board on the legality of the walkout that began Friday.

Hundreds of thousands of students were out of the classroom for a second day Monday, as many schools were closed to in-person learning as a result of the walkout, which CUPE had said will continue regardless of the labour board’s decision.

CUPE had also said its walkout would continue, regardless of steep fines set out in the government’s new law.

CUPE said it planned to fight the fines, but also that it would pay the penalties if it has to. The British Columbia Teachers’ Federation’s representative assembly voted to send CUPE Ontario $1 million to help pay the fines and Unifor has said it’s donating $100,000 to the cause.

CUPE has said that framing is not accurate because the raises actually depend on hourly wages and pay scales, so the majority of workers who earn less than $43,000 in a year wouldn’t get 2.5 per cent.

CUPE had originally been seeking annual salary increases of 11.7 per cent as well as overtime at two times the regular pay rate, 30 minutes of paid prep time per day for educational assistants and ECEs, an increase in benefits and professional development for all workers.

Laura Walton, president of CUPE’s Ontario School Board Council of Unions, said a union counter offer tabled last week cut its wage proposal in half and made “substantial” moves in other areas.