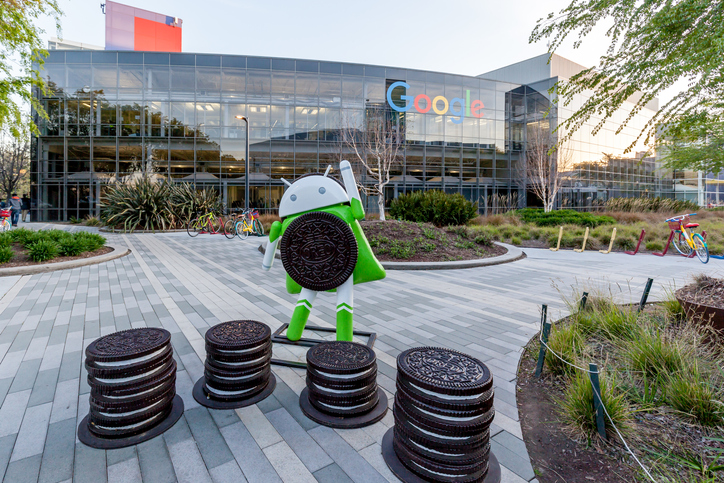 Android 8.0 Oreo statue in front of the building in Google headquarters campus. Android is a mobile operating system developed by Google. Photo: Getty

PARIS (AP) – Google’s head of philanthropy says the company is having “a lot of conversations” internally amid worries about the tech giant’s bottomless appetite for consumer data and how it uses its algorithms.

“As a consumer myself, as part of the general public, as a mother, it’s very important to understand … what am I seeing, what are my children seeing,” she said in an interview with The Associated Press in Paris, where she announced new grant winners Tuesday for projects aimed at teaching digital skills to poor, immigrant, rural or elderly users.

The philanthropic arm she runs, Google.org, is like the company’s conscience, spending $100 million a year on non-profit groups that use technology to try to counteract problems the tech world is accused of creating, abetting or exacerbating.

“Across the world we want to make sure we’re a responsible citizen,” she said.

But can Google’s do-good arm make up for everything else?

At least it’s trying, she argues.

“The company is having a lot of conversations around things like access to information and access to data and making sure there’s no algorithmic bias,” she said.

Public outrage has grown over Google’s use of consumer data and domination of the online search market, with governments stepping up scrutiny of the company.

Just in the past week, nine groups called for the U.S. government to block Google’s $2.1 billion acquisition of fitness-gadget maker Fitbit, citing privacy and antitrust concerns. Then Google came under fire for a partnership with U.S. health care system Ascension that the Wall Street Journal says gives the search giant access to thousands of patient health records without doctors’ knowledge. Both companies say the deal is compliant with health-privacy law.

Fuller wouldn’t comment specifically on either case, but said, “We take our users’ trust very seriously.”

She also insisted that the company has a very “vibrant discussion” internally about sexual misconduct, human rights and other problems that have tarnished Google’s reputation.

Its philanthropic arm is focused lately on using artificial intelligence to help society, for example by providing better access to health care and more effective emergency services. It’s also working on ways to limit the damage of the breakneck developments of AI, notably after employee departures and public pressure over a Pentagon contract pushed the company to pledge it wouldn’t use AI in weapons development.

Among projects Google.org is funding are those that help users create and share digital resumes or map job opportunities, as the company tries to figure out “how can we anticipate some of the impacts of AI in an economy, and understand how can we make sure that everyone has access to jobs that are not only interesting now but jobs that are going to be here in the future,” Fuller said.

Google is also holding a competition this year in Europe for projects on “how we can keep children safe,” she said.

Digital literacy is crucial, she said: “All of us need to discern what is truthful of what I see online. How do I ask the questions of who is sponsoring this content.”

In Paris, Fuller announced the winners of Google.org’s latest “Impact Challenge,” contests it holds around the world for non-profits using technology for good. Ten groups won grants worth a total of 3 million euros for projects helping the millions of people in France who lack the basic digital skills that are increasingly crucial for everything from paying taxes to finding a job.

Despite its philanthropic efforts, Google’s critics remain legion – even within the tech universe.

Former Google design ethicist Tristan Harris argues technology is shortening our attention spans and pushing people toward more extreme views. He couldn’t get Google to tackle these problems when he was there, so he quit and is pushing for change through his Center for Human Technologies.

He says companies like Google won’t change voluntarily but that the tech world has undergone a “sea change” in awareness of problems it’s caused, thanks in part to pressure from a frustrated public.