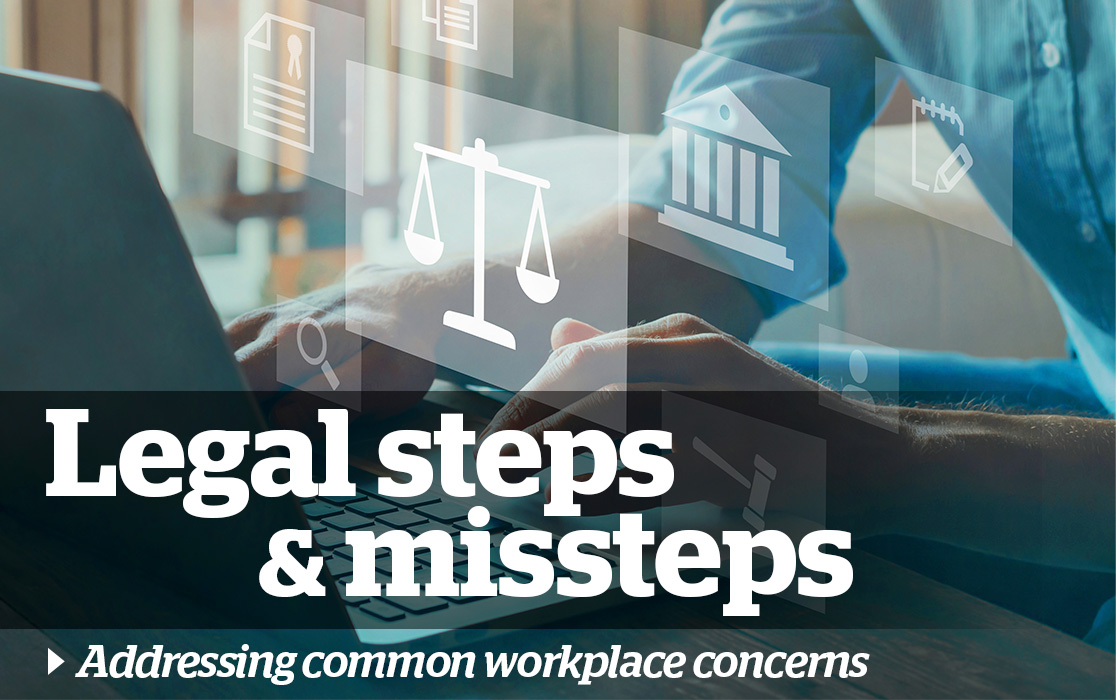 Few things can be more damaging to an organization’s brand or reputation than mishandling workplace sexual harassment. Not surprisingly, it is also a landmine for costly legal missteps, which happen all too frequently.

Now more than ever, it is critical that organizations apprise themselves of their legal obligations to prevent and respond to workplace sexual harassment complaints.

Workplace health and safety legislation across Canada requires employers to actively prevent and respond to complaints of sexual harassment.

Employers are required to have specific policies in place, which should include a company commitment to preventing sexual harassment, as well as the specific protocols HR will follow to field and address complaints.

While employers are not typically held responsible for the sexually harassing acts of individual employees, there are two notable exceptions in law to be aware of:

A poisoned workplace typically results where the sexual harassment was so persistent and/or ignored by the employer that, being subjected to the harassment effectively became a term of employment.

This is one of the many reasons why employers must have clear policies in place, and swiftly respond to complaints of sexual harassment.

Social perceptions regarding the nuances of power and consent in relationships have evolved and seeped into employment law.

Indeed, human rights legislation expressly recognizes that employees have a right to be free from sexual advances from employees who have the authority to grant or deny them benefits.

While the reality is that employers cannot completely regulate the personal relationships of their employees, organizations should be particularly wary of relationships involving superiors and subordinates.

Courts will heavily scrutinize whether an employee is truly able to consent to a relationship with someone who has the power to affect their economic livelihood.

If and when that relationship goes awry, any subsequent action taken by the employer that adversely affects the employee risks being tainted by the relationship and, therefore, vulnerable to a human rights complaint. Arguing that the relationship was consensual is not a reliable defence strategy and will likely draw the ire of a decision-maker.

An organization’s sexual harassment policy should therefore clearly outline its position with respect to relationships between subordinates and superiors.

Once an employer becomes aware of inappropriate conduct or relationships, it is critical that it responds swiftly and appropriately, and in accordance with its relevant policies.

It is not necessary that a formal complaint be lodged. Knowing of such conduct, or being willfully blind to it, is enough to trigger an employer’s obligations to address it.

Employers should take immediate steps to investigate a sexual harassment complaint. While it has become fashionable to retain third-party law firms or organizations to conduct the investigation, there is no legal requirement to do so.

Regardless of who conducts the investigation, it is critical that the investigation be conducted fairly and transparently, and maintain confidentiality to the fullest extent possible. The investigation should be treated as a fact-finding mission while giving all those involved a fair opportunity to tell their side of the story.

On the other hand, employers should be careful not to presume the truth of the allegations in their haste to denounce the alleged misconduct. The maxim of “innocent until proven guilty” is a useful guidepost.

If an employee can demonstrate that the investigation was designed to prove their guilt, which was decided beforehand, it can expose the employer to bad faith damages, particularly if the employee is eventually terminated.

Once the investigation is complete, the organization has important decisions to make, including whether it will discipline anyone, and if so, to what extent.

Employers should tread carefully in making such decisions, which will require a critical analysis of the facts, the law, and the overall message the organization wishes to send regarding such conduct.

Related
To terminate, or not to terminate, that is the most confusing COVID-19 question
Help! Accommodating parents working from home with school-aged children
Will ‘densified offices’ still work post-pandemic?
How to build a workplace harassment and violence risk assessment
Tags