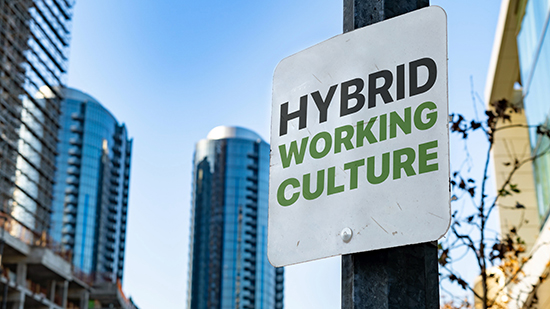 The future of work is hybrid. But how will this look practically? (AWD/Adobe Stock)

As companies start coming back to the office, leaders and facilitators must figure out how to run effective workshops in the new hybrid environment.

The necessary adjustment will be even bigger than the one we had to make at the start of the pandemic, when everything switched overnight from in-person to fully remote.

So, how can we facilitate roll-up-your-sleeves kind of workshops with both virtual “Zoomers” and in-person “Roomers” fully engaged; collaborating well together; and – in the case of Roomers – adhering to the socially distanced guidelines set by the organization?

Recently, I ran such a hybrid session with an executive team at a Global 500 company. Read on to see the top three strategies I extracted from the experience.

We’ve been guiding this client on a strategic transformation for about a year. The team hadn’t been in the same room for over 18 months. Having joined the company mid-way through the pandemic, some executives had never met their colleagues face-to-face.

The concept for the workshop was “team building while getting work done” – which, in my mind, is the best way to do team building.

At the start of the pandemic, when we went from in-person to fully remote, we quickly learnt that to ensure a successful session, we had to expand prep time significantly. Remember that?

Well, hybrid requires at least the same increase from fully remote. So, I had to put way more thoughts into the actual design of the workshop with this executive team.

Work 4.0: The future of work is hybrid, personalized

We had 14 Roomers and just two Zoomers, which was simplifying some aspects but complicating others. The client didn’t have smartboards in any of their meeting rooms, which would have simplified things. For example, everyone – Zoomers and Roomers – could have used a MURAL board.

One of our associates suggested that Roomers bring their laptops to the session, so that we could still use this tech. But I thought about it, and I said: “Hold on, what is the point of having folks gather in person if it’s to continue working the same way we’ve been working since the start of the pandemic i.e., through a screen?!” I didn’t want that.

Instead, I envisioned hybrid sub-groups working sticky notes on dedicated sections of the wall – with Zoomers fully embedded with their sub-group, collaborating with Roomers.

As I started working on the details of my facilitation road map, two things became clear.

Dedicating all this time up-front – both on design and logistics – was like making a wise investment: on the day of the workshop, we got a big return on it.

I was very lucky that the AV person the company assigned to help me was fantastic. During the logistics meeting, he came across as creative, collaborative, and agile – which was exactly what we needed.

For example, he brought to the workshop his smartphone on a tripod. It turned out to be key for the Zoomers: whenever we needed them to focus on a specific portion of the room, he turned off the overall sound system; swiftly moved where the action was with his tripod; and broadcasted to the Zoomers from his smartphone.

It removed distractions and helped Zoomers feel as if they were in the room with us.

Find a North Star that promotes a collaborative mindset

For a successful hybrid workshop, it is critical to have a North Star for everyone involved – facilitators, support team, Zoomers, and Roomers.

As I started working on the design for the session, I kept the following objective top of mind: “All Zoomers feeling as if they were in the room with the Roomers, and vice-versa.” It became our North Star.

When we met with the client personnel to figure out all the logistics, I started the session by sharing this North Star. It guided our creative problem solving.

The evening just before the workshop, I felt compelled to send a note to the Zoomers. I told them about the North Star, explaining it had guided all our prep. I committed to continue following the North Star throughout the workshop.

I wrote that nevertheless, there will be times during the session when they won’t feel with us in the room. Each time it was occurring, we needed them to alert us so that we could do something about it. We provided them with a couple of means to do so without feeling awkward about it.

At the start of the workshop, I talked about the North Star with everyone – Zoomers, AV partner and, for the first time, Roomers. I felt it was important. However, I didn’t realize the North Star’s true power until the session began…

At one point, I moved to a flipchart and started writing instructions for the next activity. Carried away, I hadn’t asked my AV partner to come with me and broadcast from his smartphone, so that Zoomers could read the instructions like Roomers.

Realizing my mistake, I pivoted on my heels to talk to him… but, to my surprise, he was right there! Guided by the North Star, he had anticipated the needs of the Zoomers; had walked stealthily behind me with smartphone and tripod in hand; and was already broadcasting. Beautiful!

Later, I split the executive team into two sub-teams – each working on dedicated sections of the wall. The first team was made up of all the Zoomers and some Roomers; the second team, on the opposite side of the room, was only Roomers.

As I floated around, I heard Zoomers explaining to their team that they couldn’t interact well with them because they could overhear the other team through the room’s sound system. I turned to go talk with that team, but they were not in the room anymore! I found them in a little cafeteria not too far from our room.

They had overheard the Zoomers’ complaint. Guided by the North Star and unprompted, they had moved to the cafeteria to let them work without interference! Clearly, everyone was in it together. They were adjusting in a nimble way to make the North Star a reality. Kudos to them!

As one of the Zoomers wrote in an email after the workshop: “I really felt the intentional effort to include us made a huge difference! I felt part of the meeting.”

She further explained that as a result, she and the other Zoomers felt accountable, which meant “being attentive, staying present, demonstrating flexibility, providing feedback on how it’s going, (and) not getting frustrated.”

Leaders and facilitators preparing for a hybrid workshop should keep the above tips top of mind.

For the North Star, given how impactful it has proven to be, I highly recommend using the one from the story: “All Zoomers feeling as if they were in the room with the Roomers, and vice-versa.”

Good luck with your upcoming workshops; learn from each experience; and keep raising your nimbleness!