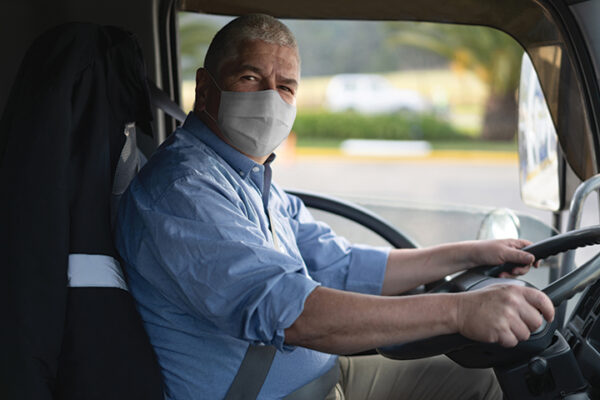 In the early days of the COVID-19 pandemic, while many businesses shuttered, truckers risked jeopardizing their own health. (Andresr/Getty Images)

Rumbling over the blacktop that unfurls across western Montana, Jason Junk wonders how much longer he’ll remain in a career that’s sustained him for 29 years.

“Nobody wants to do this anymore, because we don’t make enough money,” the long-haul truck driver from Edmonton says.

“It’s not worth it anymore.”

Stagnant wages, grinding work conditions and a perceived lack of public appreciation all factor into the decision, says Junk, 49.

An independent owner-operator, he shifted to a less arduous schedule under contract with a new company last month, but many drivers have decided to exit the industry altogether since the COVID-19 pandemic struck.

Trucking is an industry in crisis. While demand for drivers soared during the pandemic amid a surge in online sales, the number of people entering the industry has dropped due to stagnant wages, shifting labour patterns and prohibitive insurance policies that make it difficult for new drivers to earn a living.

As of October, roughly 332,000 truck drivers plied Canada’s highways in October, roughly in line with pre-pandemic levels. Still, about 18,000 vacancies plagued the sector over the last few months as young drivers, women and retirement-age workers left, according to Trucking HR Canada. Some 55,000 job vacancies are projected for 2023.

Despite the scarcity of drivers, wages remain stubbornly low, thanks to the sector’s razor-tight profit margins, said Stephen Laskowski, president of the Canadian Trucking Alliance.

“It’s a hyper-competitive industry,” he said. “The wages are a reflection of the cost of services of the trucking industry itself.”

The price of inputs ranging from increasingly digitized vehicle components to repair services and fuel continues to rise amid strained supply lines and mounting inflation.

Training poses another barrier to entry, with courses costing between $6,000 and $12,000 for two-to-three month programs. Some truckers’ salaries sit close to $44,850, based on a median wage of $23 per hour, according to the federal job bank — though experienced truckers can earn more than double that annual income, drivers say.

Pawan Kaur, who manages the Toronto Truck Driving School, says the number of monthly students has increased by a handful to roughly 25 over the last year. But she said that recent graduates can only find a job with less reputable firms who pay low wages and demand longer stints away from home.

“The problem we are facing is companies are looking for experienced drivers. No one wants to hire new, fresh drivers,” she said, noting that just half of the 103.5 hours of training required in Ontario is behind the wheel.

On paper, earning a heavy-trailer licence entitles the holder to steer a big rig. “But that doesn’t mean you’re actually ready to drive a 53-foot trailer down the highway,” said Angela Splinter, chief executive of Trucking HR Canada.

Insurance premiums reflect that stance. A key part of the industry’s labour problem, they are either off limits to fledgling drivers or prohibitively high.

“You can’t just have a pulse anymore and you give them keys to $175,000 to $200,000 worth of equipment and send them on the road — plus another 100 grand in freight that’s in that trailer,” said Lisa Garofalo, vice-president of the trucking division at Baird MacGregor Insurance Brokers.

One way out of the conundrum is through very large fleets, which have insurer-approved training programs for newcomers. But for smaller fleets, insurance companies screen for rookie drivers, effectively filtering them out.

For some, the lack of respectshown to workers who are key players in an economy even more reliant upon them during the pandemic was the final straw.

“When they closed everything down, I’d go two or three weeks and I wouldn’t take a meal outside the truck,” recalls Junk. “We go to customers to unload or reload, and we’re not allowed to use their washroom facilities.”

Drivers can face gruelling hours and up to 14 days straight on the road, spending some nights in the sleeper-cab or along the roadside. Many are paid by the mile, which means that hours stuck in traffic or waiting for a delayed shipment are a writeoff.

Just as some young people have turned away from low-wage retail jobs, so have they looked beyond the highway for more appealing work. More than 40 per cent of the trucking workforce is over 55, according to Trucking HR Canada.

The industry has redoubled its efforts to lure drivers back into seats.

A few companies are changing to a per-hour compensation model, rather than per-mile, to give employees more wage stability. The Canadian Trucking Alliance is rolling out a social media campaign to showcase the changing face of the industry to young Canadians.

Meanwhile, a federal youth employment subsidy can help cover the cost of training. And Ottawa’s Temporary Foreign Worker Program, which brings in roughly 1,500 drivers a year, can be better exploited, stakeholders say.

But none of these measures can fill the void. Experts say the occupation should be regulated as a skilled trade, which would open more pathways to government funding, immigration and training.

The Canadian Trucking Alliance also says federal and provincial governments need to crack down on fly-by-night fleets that spurn regulations, including for proper compensation and caps on daily driving hours.

Meanwhile, the role of truckers in the efforts to bring supplies to flood-ravaged areas of southern British Columbia highlights their crucial importance — and the urgency of boosting their numbers — says Barry Prentice, professor of supply chain management at the University of Manitoba’s Asper School of Business.

“That is a rare situation. But it speaks to the pressing need that people have at this point to move freight,” he said, citing an old chestnut: “If you bought it, a truck brought it.”