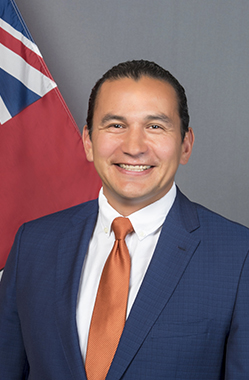 “I think the argument makes a lot of sense that if you go out on strike, you shouldn’t be replaced on your job, but what I think needs to happen now is that we need to educate Manitobans about this topic,” Kinew said Saturday after delegates at the party’s annual convention unanimously passed a resolution on the issue.

“To me, the argument makes sense, but now we’ve got to go make the case to Manitobans.”

Any decision would only be made after public consultation, Kinew added.

The Winnipeg Chamber of Commerce said Manitoba’s current labour laws are a good balance between the interests of business and labour and should not be changed.

“I don’t believe it’s in Manitobans’ interest to move forward with any legislation that would disrupt that balance,” Chamber president Loren Remillard said.

“There’s no compelling evidence that this is a problem. It’s more ideology than practicality.”

The current labour law, brought in under former NDP premier Gary Doer, allows for replacement workers. It also allows either the employer or workers to bring any labour dispute to arbitration within as little as 60 days.

Delegates at previous NDP conventions have passed resolutions calling for a ban on replacement workers, but Doer rejected those calls. He said his law ensures labour disputes are settled quickly and puts pressure on both sides to continue negotiations toward a settlement.

MFL cites rise in use of replacement workers

The Manitoba Federation of Labour said there has been a rise in the use of replacement workers. That includes their use in a strike that recently started at a child-care centre in south Winnipeg, federation president Kevin Rebeck said.

“Allowing replacement workers to come in and have (the employer) continue to operate, feeling nothing at all … is offensive.”

Opinion polls over the past two years have consistently suggested the NDP are leading the governing Progressive Conservatives, especially in Winnipeg, where most legislature seats are.

The drop in Tory support coincided with the second and third waves of the COVID-19 pandemic. At one point, dozens of intensive care patients had to be flown to other provinces because of a bed shortage.

Kinew told delegates Saturday the party is in good shape heading into the next election, after a modern-day record fundraising haul last year.

“We are closing the gap with the (Progressive Conservatives) so that we will be able to match them dollar for dollar in the next election campaign.”