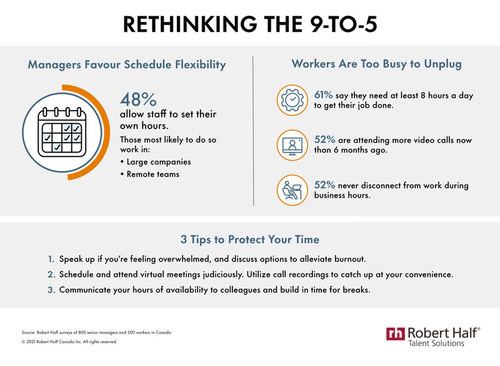 Canadian companies are embracing new ways of working, but are they ready to ditch the traditional eight-hour workday?

Research from talent solutions and business consulting firm Robert Half shows nearly half of senior managers (48 per cent) give employees the ability to choose when they work. And 31 per cent of those respondents don’t mind if their direct reports put in fewer than 40 hours a week, as long as the job gets done.

Managers most likely to offer flexible schedules work in:

Barriers to enjoying the benefits

While some employees may have complete autonomy over their schedules, that doesn’t mean they’re slacking off — or reaping the rewards.

Despite the newfound freedom, in a survey of more than 500 workers:

“Although companies are offering greater flexibility to support employee well-being, managers don’t always have line-of-sight into their team’s workload,” said David King, Canadian senior district president of Robert Half, in a news release.

“An employee with a long to-do list may feel pressure to work non-stop, which is why organizations must do their due diligence prior to introducing flexible schedules. Auditing processes, projects and deadlines, and checking in regularly, will help employers determine the work arrangements that work best for their staff.”

“Employer support is critical to mitigating burnout, including bringing in outside help, but employees are also responsible for establishing a healthy relationship with work,” added King. “Workers can protect their time by setting clear boundaries, keeping open lines of communication with their manager and raising concerns as soon as they arise.”

The online surveys were developed by Robert Half and conducted by independent research firms.

They include responses from 800 senior managers in finance, technology, marketing, legal, administrative support, human resources, and other areas at companies with 20 or more employees (collected June 4 to July 1, 2021), and more than 500 workers 18 years of age or older (collected Aug. 12 to 18, 2021) in Canada.