Columns/Blogs Features Corporate Social Responsibility
Opinion: Staying silent not an option for employers, CEOs when it comes to the horror in Ukraine 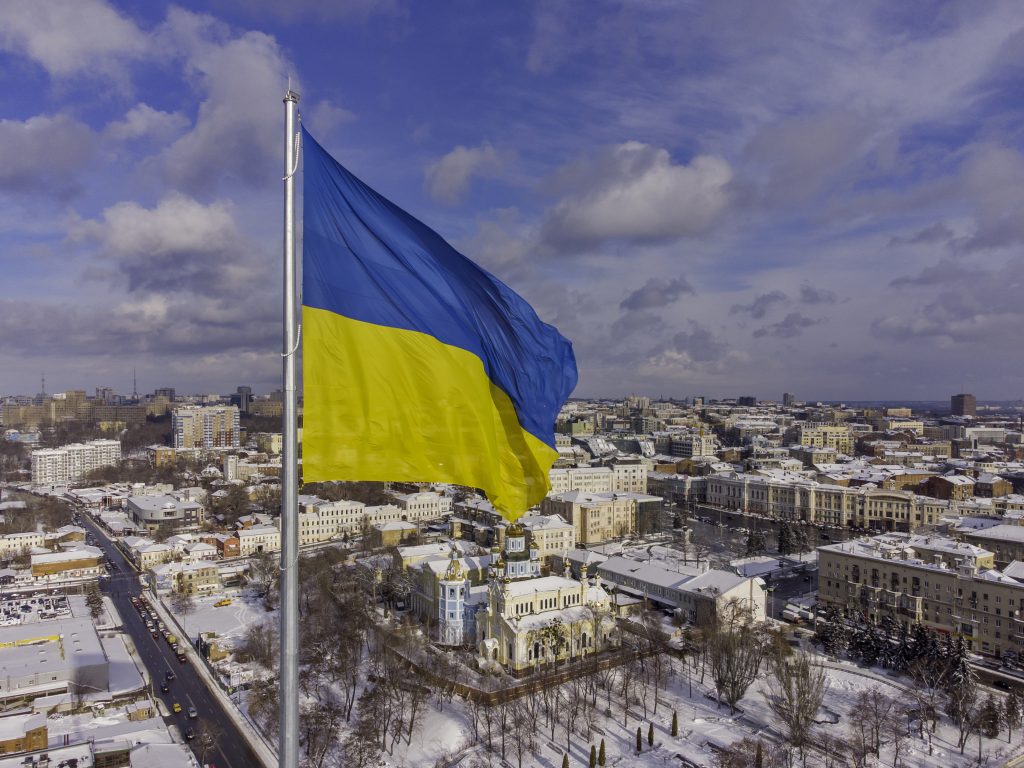 The Ukrainian flag over the city of Kharkov. Photo: Getty Images

There is no room on the fence for employers and senior leaders when it comes to the war in Ukraine.

Enough dominoes have fallen that even the most risk-averse CEO can now shout it: “We are suspending or shutting down our operations in Russia and standing with the Ukrainian people.”

The statements from CEOs may not have the ring of “I need ammunition, not a ride” that have helped make Ukrainian president Volodmyr Zelensky an uncomfortable icon.

But there is an admirable lack of hesitation by executives at companies like McDonald’s, Starbucks, Ford, Couche-Tard and so many more. The list of companies making decisions to put victims of aggression over profit is refreshingly endless.

Don’t have operations in Russia? Then ensure your supply chain steers clear of the nation until the invasion stops.

Don’t import goods or materials from Russia? Then issue a statement of support, and rally your teams to raise money and donations.

Doing nothing is not an option, not in the face of this aggression, destruction and callous regard for human life.

Your employees won’t accept it. They’re already acting on their own.

Your customers won’t accept it. They’re already condemning it.

Your shareholders won’t reward you. Some of the biggest corporate names are acting decisively, knowing full well the bottom-line impact it will have.

This war feels different for two primary reasons. The first is social media, the second is the reaction of business world.

Let me start with the first.

It started with a vibration

On Feb. 26, at 3:44 p.m., I was in my basement – playing with my espresso machine, trying to pull an expert shot and surprise my wife with an afternoon latte. It was a lazy, unremarkable and rather perfect Saturday.

I felt a vibration in my left pocket. I wiped the coffee beans off my hand, I had been a little too aggressive with the grinder settings and made a fine powder, and dug my phone out to read what I suspected was a text from my buddy Doug.

Maybe the contractors had finally started the flooring on his basement renovation, or perhaps he was flipping me a picture of a Tiki-themed cocktail he just whipped up. He has good Saturdays too.

Instead, I saw these words, embedded at the top of a LinkedIn direct message: “Please don’t stay silent! Silence is Complicity.”

It was from Inna Tuka, a professional I know and admire – our paths crossing somewhat frequently in her role at the Human Resources Professionals Association (HRPA) in Toronto and mine as a journalist covering the workplace over the last two decades.

Below those words were a video, her face filling the screen. Inna has never sent a video. I clicked play.

“To everyone in my network globally, I need your help,” she said. The tone in her voice, the look on her face told me everything.

Inna is Ukrainian, something I didn’t know until now. And it had been two days since Russian forces invaded her homeland. I sat down and listened.

“My little five-year-old niece had to walk 15 miles on foot to escape war in Ukraine,” she said.

“The Russian president Vladimir Putin is not a peacemaker. The troops that he’s been sending to Ukraine have been killing civilians. People whom I personally know. They are peaceful, talented people.”

It was tough to watch.

No corporate filters, no PR people vetting the language, no reigning in the raw emotion and truth of her words. In short, not what you often see on LinkedIn when your employer’s name is prominent next to your own.

Inna’s video was the thin edge of the spear, and it has been followed by a deluge of pleas, stories, pain and hope that have filled my professional network.

Shortly after I watched Inna’s video, my wife showed me a post on LinkedIn from Irina Kravtsova, a lawyer at Raben Ukraine.

In it, she outlined her professional goals before Feb. 24 – including finishing her PhD thesis and to speak at conferences and roundtables. But after the invasion, she has reduced it to one goal: “Stay alive.”

She also shared a photo of pallets lining her basement floor.

“Instead of living life peacefully, developing my professional skills and sharing my knowledge with scientists all over the world, I have to build together with my family ‘comfortable’ place in the cellar to be able to stay during attacks,” said Irina. “So let’s talk now about your professional plans for the nearest future.”

A war watched on social media

I have seen heartbreaking videos, like one of a captured Russian soldier, being consoled by the people he was attacking, as they held a phone in front of him so he could Facetime his mother and let her know he was OK. This is not my grandfather’s war, where he left in 1942 and was barely heard from until he returned in 1946.

I got goosebumps watching a crowd of 80,000 people in Prague react to Ukrainian president Zelensky’s speech asking for help the way they would a World Cup goal.

I’ve watched with sadness and anger video after video showing the brutal reality of war, shot by citizens who three weeks ago lived a life so similar to ours. Like Inna’s message, there is no filter, no massaging the message. Just the harsh, awful, horrifying truth caught on camera for all to see.

The response from the C-suite

The workplace journalist in me has been most fascinated by how quickly and decisively the corporate world has acted, and not just because sanctions may eventually force their hand.

Just this week, we posted two stories on Talent Canada about companies pulling out of Russia in retaliation for the invasion. While it seems like an easy decision or a no-brainer, there are nuances that make these decisions tougher than you might guess.

Couche-Tard, the Quebec-based convenience store chain that operates 38 Circle K stories in Russia, condemned the invasion and said it was winding down its operations in response – but also took pains to say it was taking care of its Russian employees.

“Couche-Tard has had stores in Russia for nearly three decades, and we are proud of our Russian team members and their dedicated service to local customers and communities,” said chief executive Brian Hannasch.

Commercial real estate firm Colliers pulled out of both Russia and Belarus, which has supported the invasion and allowed Russian troops to cross its border.

“I am appalled and saddened by the unnecessary loss of life and the displacement of millions of Ukrainians from their home,” said global chair and CEO Jay Hennick. “We cannot and will not stand idly by.”

McDonald’s, which operates fast-food locations in about 850 Russian communities, announced it was closing all its restaurants temporarily. But there was no glee in the announcement from CEO Chris Kempczinski.

He pointed out that the situation was “extraordinarily challenging for a global brand.”

“In Russia, we employ 62,000 people who have poured their heart and soul into our McDonald’s brand to serve their communities,” said Kempczinski. “We work with hundreds of local, Russian suppliers and partners who produce the food for our menu and support our brand.”

It also operates its Ronald McDonald House Charities in Russia, which it pledged will continue despite the restaurant closures. In a gesture of goodwill to its employees in both Russia and Ukraine, it announced plans to continue to pay all of them full wages during the conflict.

But the company’s values cannot ignore the “needless human suffering unfolding in Ukraine,” he said.

This may seem odd, but one of the things that struck me about Inna was what was in the background of her video.

Behind her was a silver framed record of the Tragically Hip, with a picture of lead singer Gord Downie at the microphone. In her video, she pointed out that she came to Canada in 2010 to live her life without fear.

I asked her if I could share her story and video for this column. She agreed, with a condition: “Please don’t call this ‘conflict or crisis.’ It’s a war, led by Russian president. Too many died already to still talk about this politically correct,” she said.

That statement, were I to write it in Russia, could land me in jail for up to 15 years.

It is illegal, by Putin’s decree, for a journalist to refer to what he is doing as an “invasion” or a “war.”

She also wanted me to share the story of Anastasiia Yalanskaya. You can read the horrific details from Global News here.

It’s a tough read. She was shot and killed, allegedly at close range by Russian troops, while delivering food to a dog shelter.

Yalanskaya, just 26, was an HR professional who worked as a recruiter.

We are. And business leaders and corporations cannot stay silent anymore.

Related
Survivor votes out sexual harassment in a laudable, yet problematic, way
It’s time for employers to address societal racism
From the editor: Canadian CEOs take a stand against hate
Considering backing a political candidate? Strategies for organizations
Tags