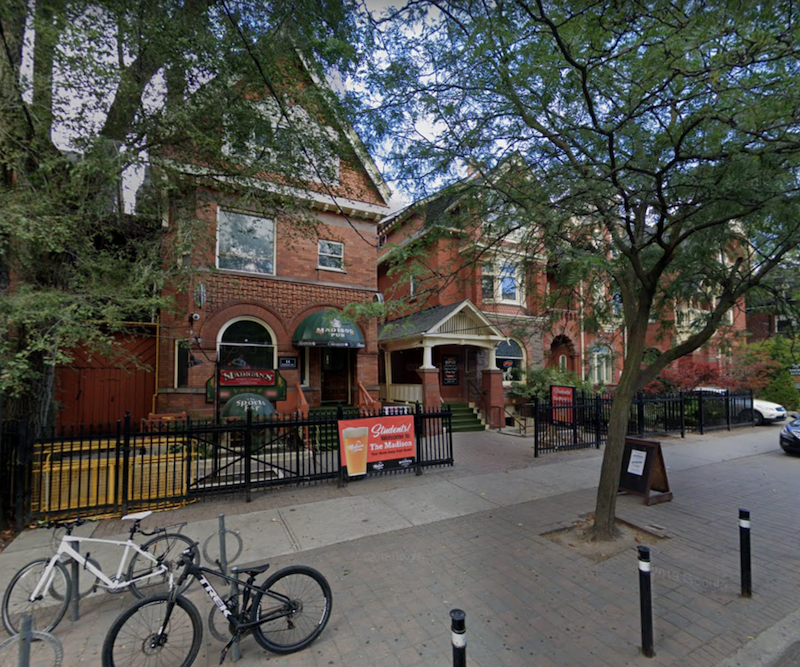 The Madison Avenue Pub - aka "The Maddy" - in Toronto. Photo: Google Streetview

The bold red and black signs just inside Paupers Pub are a blast of nostalgia.

With a handpainted appearance reminiscent of simpler times, they advertise everything from all-purpose flour to apples to white bread — provisions the Toronto pub is newly peddling to stem the financial bleeding brought on by COVID-19.

“I wouldn’t say it’s a money-making type of strategy. It’s a survival type of a strategy, and it’s a community strategy.”

The global pandemic has been a disaster for the restaurant industry, costing about 800,000 jobs across the country in March, according to Restaurants Canada.

Paupers, OCCO Kitchen in Ottawa, and El Santo in New Westminster, B.C., are just three of the thousands of pubs and restaurants forced to pivot to survive a bleak new landscape.

Here’s a look at how the three eateries and their staff are coping since COVID-19 brought the industry to its knees.

“I’m tearing up a little bit. It was very, very hard,” she says. “We had just done our first round of spring hires for St. Patrick’s Day, trained all those people, worked with them day in and day out to get ready for our biggest day of the year. The energy and excitement of having gone through a hard winter, looking forward to the pot of gold at the end of the rainbow, the St. Patrick’s Day opening up of the patios….

“And then all of this was happening and we’re like: ‘Are we opening? Are we closing?”’

Paupers is a fixture in the lively Toronto neighbourhood known as The Annex, where Lourenco also manages the nearby Madison Avenue Pub — known simply as “The Maddy” to the party-hard university crowd.

During peak season, both employ 150 staff. But the landscape changed at whiplash speed March 17 — St. Patrick’s Day — when Ontario declared a state of emergency and restricted restaurants to takeout service.

They immediately closed the Madison, which has a capacity of about 2,000 when patios are open. Now a combined staff of five provide takeout and make-at-home kits including butter chicken, do-it-yourself nachos, frozen lasagna and cookie dough. And of course, groceries, which now make up 80 per cent to 85 per cent of business.

There are lessons learned — like a new online ordering web portal — that come with being forced to reinvent.

But some days are heartbreaking. Lourenco worries about her family.

She tosses her clothes in the wash and showers at the end of shifts before accepting a hug from her daughter.

Foot traffic in the normally bustling Annex has ground to a halt. Many businesses have shuttered temporarily. Some have closed for good. “For Lease” signs replace window space once reserved for daily beer specials.

Staff deliver food orders to the doorsteps of nearby residents who are home-bound, including seniors and people in quarantine. They also feed guests, mostly frontline workers, who stay at the Madison Manor Boutique Hotel.

“We’ve been doing what we can, and we’re hopeful that this will be enough,” says Lourenco, believing businesses that withstand COVID-19 will be stronger for the relationships built.

While Paupers closed just before the boozy green-beer celebration, Lourenco doesn’t see the holiday decor as a day that was lost.

“When this is all said and done, we will have St. Patrick’s Day. And it will be a great day.”

Caroline Cote has had trouble sleeping ever since COVID-19 forced her to lay off 99 staff in the two OCCO Kitchen restaurants she and husband Mark Steele own in Ottawa and Orleans, Ont.

“It was crushing,” Cote says. “One of the hardest things I’ve had to do as a business owner, just an awful feeling.”

According to Alignable’s small business pulse poll this week, 90 per cent of Canadian businesses including retail, travel, and restaurants have been hurt by the virus. The three most impacted provinces are Ontario, Saskatchewan, and New Brunswick.

Cote and Steele saw the writing on the wall when large groups began cancelling St. Patrick’s Day reservations. Neither restaurant, of course, saw St. Patrick’s Day. The couple closed their downtown location and temporarily shut the Orleans restaurant on March 17.

“Right away we started thinking: ‘What can we do to keep our business going?”’ she says.

OCCO launched a grocery marketplace. Customers can purchase everything from a “box of sweets” — Nanaimo bars and blondies — to caramelized onion and pepper breakfast sausages, to almond milk and staples including eggs and cheese.

“It’s not comparable to if we were running our businesses like we normally do,” Cote says.

“But it’s money in the bank account … and at the end of the day, it’s helping the community, and that’s OK.”

OCCO Kitchen, which grew from a small takeout business to a 200-seat restaurant featured on Guy Fieri’s Food Network series “Diners, Drive-Ins and Dives,” is known for making pickles, buns, ketchup and more from scratch, and sourcing its food locally.

“(The grocery marketplace) was really a win all around in that there were a lot of people coming back from travels that were going to be in quarantine, a lot of people at risk, who were unable to go out,” Cote says. “It also allowed us to maintain one of our core values in that we buy from local farms, we buy from local craft breweries … we just use as local as possible.”

Cote reflects on the positives. The restaurant reintroduced its takeout menu last week. That’s allowed her to hire back 15 employees. And the community connection warms her heart.

“It’s a curbside contactless pickup process, but people will put their window down and they’ll talk to us from a safe distance,” she says. “I was telling Mark the other night I’m going to be really sad to close the marketplace down when things go back.”

On a normal Friday night, El Santo would be humming.

The mezcal, and live soft Latin or jazz music, would be flowing.

These days, Alejandro Diaz finds joy in the smallest gestures.

“People stop and look in the window and wave,” he says.

Diaz, who moved to Canada from Mexico City 24 years ago, owns both El Santo and the plant-based Amaranthus a couple of blocks apart in revitalized downtown New Westminster, B.C. Since shuttering both dining rooms in mid-March, he’s laid off 40 people. His current staff: a manager and two chefs who supply online orders through El Santo’s Facebook page.

Instead of nightly takeout, the combined kitchens offer a weekly three-course meal that takes three days to prepare. This week’s featured confit duck leg, roasted cauliflower and potato salad with poblano peppers, and caramelized pineapple cornmeal cake. It sold out days in advance.

But Diaz says the business earns between just four and six per cent of its previous weekly gross revenues.

A Restaurants Canada survey released Friday found 75 per cent of owners are either very or extremely concerned about their level of debt. If conditions don’t improve over the next three months, it’s estimated one of every two independent restaurants will survive. Most multi-unit food business will have to close at least one location. More than 75 per cent of respondents identified rent as their main source of debt.

Diaz says the emotional pain is perhaps worse than the financial woes. Since opening in 2015, he’s seen couples meet, get married, and have kids.

“People are my passion. When I opened El Santo it was not just about a business, it was about opening a community place,” says the married father of three boys.

“I live five minutes away from the restaurant. So for me, every time a guest comes in, it’s more about our relationship than a transaction.”

Diaz is passionate about fundraising and laments the inability to hold two events — a Parkinson’s disease fundraiser at Amaranthus, and another event for the Canucks Autism Network.

“I get texts, emails, people walk by and wave. That makes it a lot easier,” he says. “But it’s so difficult now because it was not just having a restaurant, it was a place where we made lots of friends.”