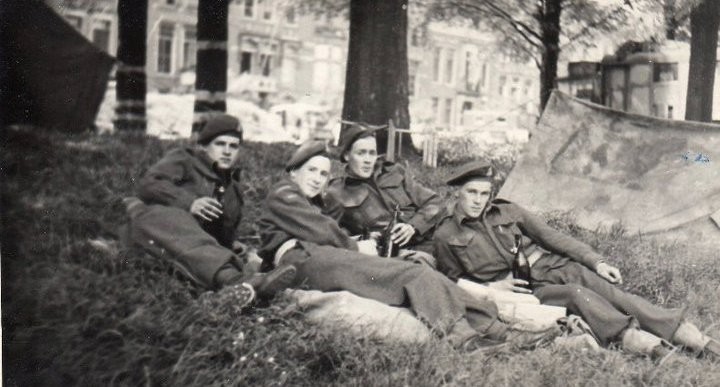 My grandfather Joseph Hart (far left) enjoying a lighter moment - and a beer - with fellow soldiers during the Second World War.

Every year, when the calendar turns to November, the thoughts of Canadians turn to the veterans who fought for our freedom.

Every year, when the calendar turns to November, some organization or employer bans the wearing of the poppy or poppy sales on premises, citing a well-intentioned corporate policy. (I swear, I write this same column every year.)

The U.S.-based grocery chain told employees in Canada they can’t wear the poppy, citing its employee dress code. What is allowed? An apron, coat or vest, a company-branded hat and name badge.

Everything else? Off the table.

The reason? According to one employee, it’s because the company doesn’t want to be seen to be supporting a particular cause.

It bears repeating, in this day and age, that the poppy is not a political symbol. It is not left or right. It is not pro-war. It is an all-too-rare, non-commercial and utterly genuine gesture. The message? Thank you. And we remember you.

The red felt precariously pinned to our hearts is a tip of the hat to the men and women who have served for Canada, to keep this country safe and to defend our values around the world.

It is one of the few things in Canada that is above reproach. The condemnation came with predictable speed and voracity.

The opposition piled on, with new Conservative leader Erin O’Toole saying that the sacrifices made by veterans “provides the freedom for a U.S. grocery stain to be stupid today.”

Ontario Premier Doug Ford tackled the problem — which he called “disgusting and disgraceful” — head on. The province will introduce legislation that prohibits employers from banning poppies around Remembrance Day.

The united outrage is oddly satisfying. With a deeply concerning and polarizing election process playing out south of us, it’s comforting to know that in Canada we are still united in our collective appreciation for what we have and the people who sacrificed so much to ensure we have it.

For me, like many Canadians, Remembrance Day is deeply personal. Years ago, I wrote a column on LinkedIn highlighting his life. If you’ll indulge me, I’ll share it again below.

The story of one Canadian hero

My grandfather turned 20 on board the Queen Elizabeth as it sailed to England in 1942, crammed in with thousands of other young soldiers. He turned 24 on the boat ride home following the end of the Second World War.

The years he spent sleeping in the muck, away from family and home, I spent at university.

It’s a striking contrast I never forget and never take for granted. It’s also one he was proud of that brought a smile to his face.

As I write this, Canadians across the country are fixing poppies to their chest. Some have the day off tomorrow, and will be heading down to their local cenotaph to mark Remembrance Day. Others have to go to work, but will pause at 11 a.m. on Nov. 11 to remember the men and women who sacrificed their lives protecting Canada and its values.

Like many, Remembrance Day is very personal for me. When the clock strikes 11, my mind focuses on him — my favourite memories, the stories he told, his infectious laughter.

His name was Joe Hart, and he was a signalman in the Royal Canadian Corps of Signals (RCCS). He died in 2006, so I had the privilege to get to know him throughout my childhood and well into my adult years.

Like most veterans, my grandfather didn’t want to talk about the war. But he began to open up to me when, as a child, I started asking questions about what it was like to fight in a war. And he began to answer… slowly, at first, and cautiously. It was only years later that I found out that my mom and aunt were spellbound during our conversations, because he had — up to that point — refused to discuss it whatsoever. It was a taboo subject, unbeknownst to me.

The stories were mostly funny, as they always seem to be with veterans. But in amongst the jokes and the tales of hijinx were hints of some of the more difficult moments.

After I became a journalist, I decided to sit down with him to write a profile on him for the newspaper I was working for at the time. It allowed me to formally chronicle his efforts.

My grandfather walked into a recruiting station with his best friend on April 24, 1942. He wanted to join the air force, but the waiting list was too long. His worst nightmare was being in a tank or a submarine — he was a little claustrophobic, he said — so he ended up with the RCCS and became the wireless radio operator for Gen. Chris Vokes and Gen. Guy Simonds, the top two Canadian commanders.

In December 1942, he sailed to Scotland from Halifax on board the Queen Elizabeth with 23,000 people. He spent a few months training in England before being deployed to the Mediterranean in July 1943 as part of the allied invasion that drove the Germans out of Sicily and Italy.

His first experience with live combat was a comedy of errors.

They could hear the ships in the water calling, but couldn’t signal back. So they packed up their gear and went for a swim in the ocean.

There was also the time they went fishing in the mountains of Italy. They didn’t have any fishing gear, but they had something more effective than a rod or reel — a Thompson submachine gun.

“They fired a .45 calibre bullet. You didn’t have to hit the fish, just shoot near them and the concussion would knock them out,” said Hart.

Some engineers he was with took fishing to the next level.

“They had two-man rubber rafts,” he said. “They used explosives out of the mines, put a fuse on them and threw them over the side. Then they would row out of the way and go back and just pick up the fish.”

He also went pretty much the entire war without a helmet. Outside of Ortona one day, he was shaving and removed his hat and set it on the wheel of a truck.

“We used to make tea by digging a hole in the ground, putting gas in it and a can of water and lighting the gas,” he said. “Well, the camouflage net covering the truck caught fire when he lit it. The driver jumped in the truck and ran right over my tin hat. Flattened it like a pancake.”

He couldn’t get a replacement until he was in northern Europe, when the war was pretty much over.

The one story he told me where he didn’t laugh was what happened during his third day in Sicily.

“Some aircraft… shot us up real good,” he said. “We had about five or six killed and 15 to 20 wounded out of 60 guys. They got the vehicle in front of mine and the one behind it. I was just lucky there was no aircraft pointed at mine.”

He also played a key role in a deception that convinced the Germans the Canadians were in Italy, when in fact they had left to prepare for the D-Day invasion on the beaches of France. When the First Canadian Division departed Italy, Hart remained behind — relaying fake messages so the enemy wouldn’t know troops were on the move.

He later served in France, Belgium, Holland and Germany. He had the opportunity to go back to Holland for the 50th anniversary of the liberation, and was left speechless by the experience.

“I don’t think I could find the words to really explain how I feel about it,” he said. “They’re a nation of people that are so grateful for the fact that the Canadians came there and freed them from the German oppression. They just can’t do enough for you.”

He visited Groesbeek cemetery, where 2,338 Canadian soldiers are buried — a number he didn’t need to look up during our interview — and was amazed at how well looked after the grounds were.

Remembrance Day always helps put things in perspective for me. Yes, at times life is stressful. Yes, we can be bogged down by red tape and annoyances and negativity about the economy, election results we don’t like, et cetera.

But on days like this, I think of my grandfather — and the hundreds of thousands like him — who sacrificed so much and gave us the privilege of complaining about the minutia of life.

My dad’s father — Gerald Humber — also served. He was in the Royal Canadian Air Force during the Second World War. He was a so-called “Zombie” — he never actually left Canadian soil, but that doesn’t diminish his contributions. He simply did what he was told, followed orders and contributed to the war effort from Ontario. He died when I was very young, so I have few memories of him and almost no knowledge of his war-time experience.

On a day like Remembrance Day, we pause to say thanks to the Joe Harts and the Gerald Humbers of this world, past and present, and thank them for all that they did.