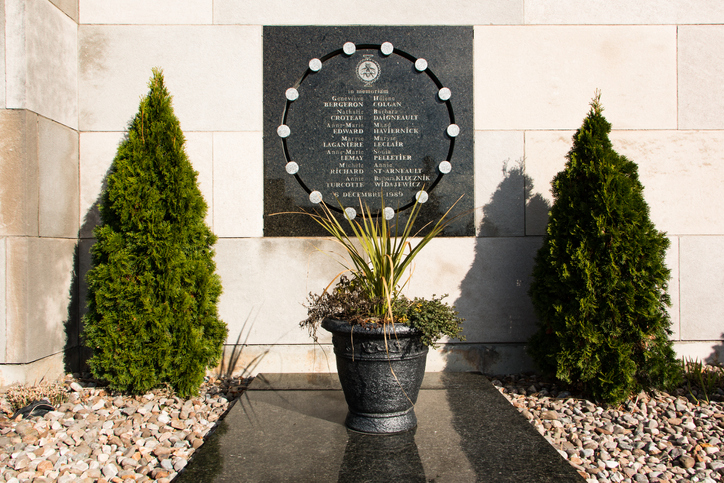 Plaque commemorating the 14 females victims of the Ecole Polytechnique massacre, on the school's outside wall. On Dec. 6, 1989, a man armed with a rifle and a hunting knife, shot 28 people, killing 14 women, before committing suicide. The killer targeted female students. Photo: Getty Images

The 30th anniversary of the Montreal Massacre is an opportunity to reflect on what has changed after three decades of advocacy on violence against women, on gun control and on women in science, technology, engineering and mathematics (STEM).

Three years after the massacre, the Canadian Committee on Women in Engineering released its “More Than Just Numbers” report. The report detailed the barriers women face in engineering and issued a national call to action.

Here we are, 27 years later. The proportion of women enrolled in undergraduate engineering programs is marginally better, increasing to 22 per cent from 16 per cent. But Canada still lags behind other industrialized countries. And despite the burgeoning tech sector, women in computer science make up a smaller proportion (16 per cent) today than in 1989.

This has occurred at a time when business, law and medical schools have doubled their female enrolment. And mathematics programs have more than 40 per cent women, belying the myth that “math is hard” for women. In spite of the good intentions and massive investments in programs – the engineering camps, the posters of girls working with robotics, the astronauts in schools talking about the joys of science and technology – we are proceeding at a snail’s pace.

“The cultural influences that channel girls and young women away from non-traditional roles start with parents and other caregivers in the preschool years. Once in school, many girls and young women continue to be discouraged from pursuing interests in mathematics and science and from considering careers in engineering by teachers and guidance counsellors who are not sensitive to gender stereotyping. Once in the workplace, women engineers encounter attitudes and activities that are systemically biased against women. Many face discrimination in hiring, promotion, job assignments and salary, and experience sexual harassment in their workplaces. Many have to cope with the isolation of being the only female engineer in a company or on a job site. As well, not enough employers have policies that enable employees to balance family and career responsibilities.”

This description from the “More Than Just Numbers” report remains pretty much unchanged since 1992. More recent reports – for example TD Bank’s 2017 report “Women and STEM: Bridging the Divide” or the Canadian government’s “Persistence and Representation of Women in STEM Programs,” released in 2019, tell the same story. The TD study also notes that women working in STEM fields earn less than their male counterparts even though they earn higher wages in STEM occupations relative to others.

We need to apply what we know about innovation to drive diversity and inclusion. Education is one of the least effective ways of shifting behaviour: knowing that more women in STEM would be good for the economy, inclusive systems design and innovation is not enough.

For example, if we look at the proportion of women enrolled in engineering schools across Canada, we see massive variances between institutions. Some, like Queen’s University, University of Waterloo and University of British Columbia, have approached or exceeded 30 per cent. The University of Toronto reports that 40 per cent of its 2019 incoming class was female. Other schools are closer to 10 per cent.

The data are hard to find. Engineers Canada does not publish gender data by school and its 30 by 30 goal – raising the percentage of newly licensed engineers who are women to 30 per cent by 2030 – seems modest given that so many schools have hit that target already.

Of course there are pipeline issues as well as structural challenges – women are better represented in disciplines such as biomedical, chemical and environmental engineering than they are in civil, mechanical or aerospace. But we need to look at program design, pedagogy, recruitment and support. We need to challenge the systems that have embedded barriers.

Part of the challenge has been that good intentions are not matched by action. Few stakeholders – associations, universities, governments, certification bodies – are using the levers at their disposal, including funding, procurement, accreditation, reporting and transparency, to effect change. Money talks, and if they had prioritized female representation in engineering and other STEM disciplines – and backed it up with real consequences – we would have seen faster change.

There are shining examples of programs focused on increasing women in computer science. Carnegie Mellon University and Harvey Mudd College documented strategies that reached between 30 and 40 per cent female enrolment. But most universities are slow to innovate, and without committed leadership and a results-oriented, multi-layered strategy, words are often not matched by actions.

Of course, we also have to start further upstream. Girls’ choices are influenced by many factors: broad societal stereotypes and expectations by teachers, peers, family and friends. Again, programs can dramatically increase girls’ interests in math, science, engineering and technology at an early age, but they are fragmented and often dependent on haphazard support and funding.

To make gains, there must be clear targets, support and accountability tied to funding.

Employers are critical to tackling the issue. Women often report high levels of discrimination and harassment and a culture often referred to as “brotopia.”

Some companies are making progress. Some organizations have set targets supported with intentional strategies and tied to management compensation. Others have used innovative approaches to attract women by addressing corporate culture.

For example, one reached 30 per cent female participation by focusing on hackathons for social good as part of its recruitment strategy. And other companies are trying to address the pernicious problem of the leaky pipeline – women leaving the profession at a higher rate than men – with a range of tactics.

Finally, we need to make more space for innovative blended programs that combine technology with social science and humanities. When we look at female executives of the top information and communications technology companies – Xerox, Twitter, HP, IBM, Facebook – half of them do not have STEM degrees.

We should encourage girls and women to pursue engineering and computer science but we should also recognize that there are other pathways into technology roles. With this dual perspective we should be able to advance the participation of women in technology. Developing multi-layered and collaborative strategies with specific targets will help us avoid having the same well-intentioned but ineffective conversation for another 30 years.

Wendy Cukier is a professor at the Ted Rogers School of Management, Ryerson University in Toronto. This article is republished from The Conversation under a Creative Commons license via the Canadian Press.

Related
Why do leaders have stronger feelings of inclusion than employees?
Noose placed on brewery shooter’s locker in 2015: Molson Coors
Military needs to be 30 per cent women for real change: Vice admiral
As Starbucks Canada looks to reopen in May, its president pens a letter to employees