Canadian workers are notoriously shy when negotiating a higher salary with a new employer, a truism that has been backed up with new research.

Barely one-third (36 per cent) of professionals surveyed tried to negotiate for more money with their last job offer. The reason? Most (59 per cent) were happy with the salary being offered, while 19 per cent said they wanted more money but felt uncomfortable negotiating. The research was conducted by Robert Half, a global staffing firm.

U.S. workers not so shy

In a similar survey of workers in the United States, more than half of professionals (54 per cent) tried to negotiate salary with their last job offer. Of those who didn’t negotiate, 55 per cent were happy with the amount offered, while others wanted more money but were either worried they would lose the role if they asked, or felt uncomfortable having the conversation (18 per cent, respectively).

“Salary negotiations are a great opportunity for candidates to underscore the value of their skills and what they can bring to the business,” said David King, senior district president of Robert Half. “Any successful compensation discussion requires research and practice beforehand. Look into local compensation trends in your industry, identify which perks or benefits outside of salary are most important to you, and even run through potential scenarios ahead of time; the better prepared you are, the more confident you will feel navigating the conversation.”

It’s just as important that hiring managers do their homework on local salary trends and popular perks heading into negotiations, added King. “While a well-rounded, competitive compensation package is key to attracting candidates, flexibility and openness in the discussion ultimately paves the way for a more positive and constructive conversation for both parties.”

The online surveys were developed by Robert Half and conducted by independent research firms. They include responses from more than 500 workers 18 years of age or older and employed in office environments in Canada, and more than 600 senior managers at companies with 20 or more employees in Canada. 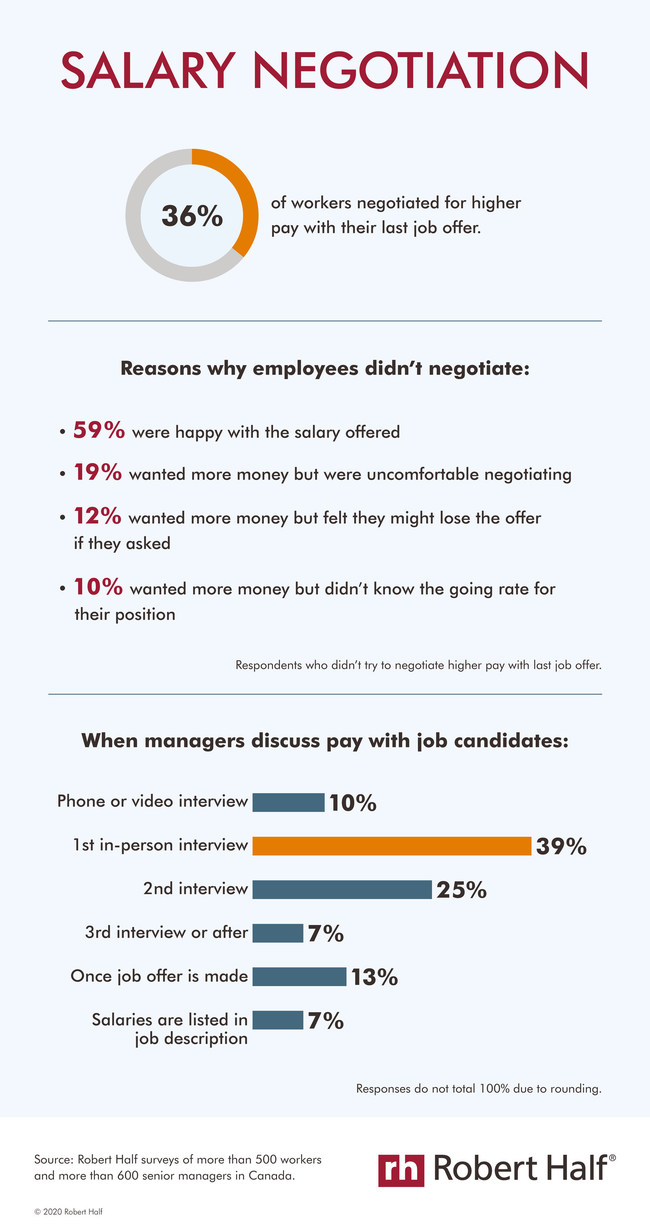