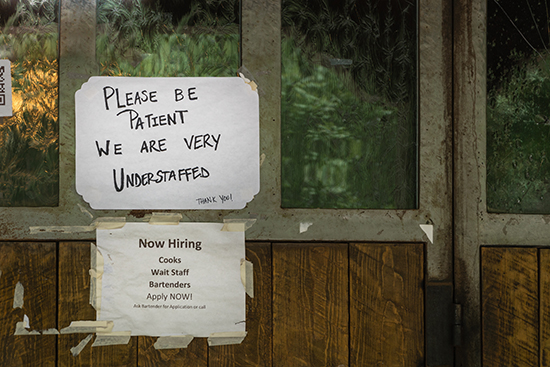 Many small and medium-sized businesses in Canada are currently having a difficult time finding new employees. (Heidi/Adobe Stock)

Statistics Canada says the unemployment rate in March fell to its lowest rate on record, falling to 5.3 per cent from 5.5 per cent a month earlier as the economy added 72,500 jobs.

That’s the lowest jobless rate over comparable data going back to 1976, the agency said.

Statistics Canada also says the unemployment rate would have been 7.2 per cent had it included in calculations people who wanted a job but did not look for one, falling to pre-pandemic levels for the first time.

Provincially, the agency says gains were concentrated in Ontario and Quebec.

CIBC senior economist Andrew Grantham says there may be room for the unemployment rate to fall a little further, given areas of the country like oil-producing provinces were not at full employment before the pandemic struck.

Since hitting a peak of 1.5 million in April 2020 at the onset of the COVID-19 pandemic, the number of people wanting work but not actively looking has fallen to 377,000, similar in size and proportion to the overall labour force witnessed in the month of March in each of the three years before 2020.

Just over one-quarter didn’t look because of an illness or disability. A further one-fifth were part of a group waiting for a recall or reply from an employer, or who didn’t think there was anything available.

Nearly an additional fifth pointed to personal and family responsibilities as the reason they paused their job search.

The agency says employers will have to tap into this group amid widespread labour shortages, though their ranks are falling.

The tightening of the labour market also meant average hourly wages were up to 3.4 per cent year-over-year in March, up from 3.1 per cent in February.