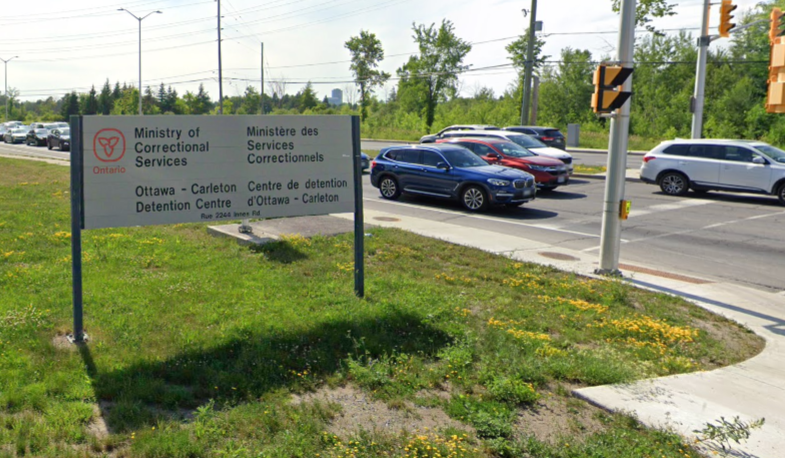 Sign at the entrance of the Ottawa-Carleton Detention Centre. Photo: Google Streetview

Guards at an Ottawa jail refused to work Tuesday morning due to the lack of COVID-19 screening of those going inside the institution, the union representing its correctional workers said.

“Everyone is taking precautions everywhere, yet we come to the correctional institutions and we’re not taking any precautions,” Graham said.

He said the union has been pushing the Ministry of the Solicitor General for weeks to implement screening measures at all provincial jails that include asking anyone entering the institution — from guards to management to inmates — about COVID-19 symptoms.

The union has asked that the screenings be done by either a health-care professional or an employee, including questions about a new cough, fever, difficulty breathing and travel history, and include a temperature check.

“This is very important. We need to protect the inmate population from us bringing the virus into them as much as them bringing it into the institutions themselves,” he said.

Graham remained hopeful screenings would begin at all institutions across the province soon but said “the wheels are not turning as fast as they should be.”

The ministry said it “takes every possible step to ensure a safe workplace for employees and works to address any safety issues raised.

The ministry said staff are required to perform self-assessments before entering the institutions and to monitor their own health. Staff are also expected to report any changes to their health to management.

Those being admitted to the institution are monitored for respiratory illnesses, the ministry said.

The guards returned to work around 2 p.m., Graham said, after direction from the Ministry of Labour.

The Ottawa jail, which has a capacity to house 585 inmates, many of whom are awaiting trial and presumed innocent, is notoriously overcrowded.

The facility went into lockdown, which is standard procedure when not enough guards show up to work.

Michael Spratt, an Ottawa criminal defence lawyer, said his client was taken away from the phone when the two were talking as the institution went into lockdown.

With no guards, inmates were unable to appear before a judge by video because they were stuck in their cells, Spratt said.

“It was a blind spot for the courts until 2 p.m.,” Spratt said, noting many cases, including bail hearings, had no-shows and had to be put over to another date, keeping some inside who may have gotten bail.

OPSEU said three guards and one inmate at provincial jails have tested positive for COVID-19.

The ministry said no staff or inmates have tested positive for the disease in the Ottawa jail.