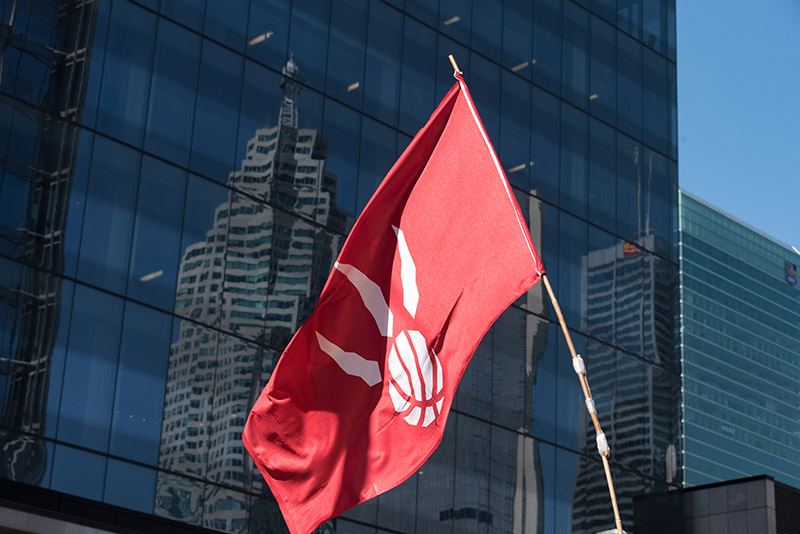 Scotiabank Arena, home to the Maple Leafs and Raptors, has been turned into a giant kitchen during the COVID-19 pandemic.

The same arena floor that saw Kawhi Leonard sink his buzzer-beater to propel the Raptors past the Philadelphia 76ers last May now houses one big food production line.

Maple Leaf Sports & Entertainment, in conjunction with its partners, is looking to prepare 10,000 meals a day to go to Toronto’s front-line health-care workers and their families as well as the city’s most vulnerable via community agencies and shelters.

MLSE is planning to run the program five days a week at least through June, delivering a half-million meals.

“It will be meaningful,” said MLSE president and CEO Michael Friisdahl, who sees the project as a way his company can fill a need in the community during troubled times.

The operation started at 2,800 meals a day and has been climbing steadily.

“We learned that cooking 5,000 pounds of pasta takes a long time.”

One day earlier this week, they churned out 17,000 litres of chili and a matching volume of rice with giant 120-litre cooking pots constantly on the go. Another day involved 100 litres of jerk marinade and 1,700 pounds of chicken legs.

The operation currently involves close to 20 chefs and some 50 others — MLSE managers with food experience like the general manager of e11even, MLSE’s posh restaurant located next to Real Sports bar/restaurant. The total number will ramp up to 90 workers, one third of whom will be chefs, when they hit high gear with 50,000 meals a week.

MLSE culinary director Chris Zielinski is no stranger to feeding thousands on game night, from a simple slice of pizza to a $95 striploin and $150 seafood tower.

But usually he has a much bigger crew to do it. The need for social distancing has reduced numbers.

“This crew has just been unreal at working through all the challenges, figuring how to make the process seamless and safe,” he added.

The need for social distancing is helped by the size of the venue. The operation is currently using five kitchens, with the bulk of food being cooked in the arena’s main kitchen. They have used the Hot Stove Club, for example, to prepare and cook potatoes.

There are nine kitchens in all, with more coming into play as the number of meals climbs.

In the past, the big kitchen would be filled with 40 people. Now the number is restricted to eight.

“Normally we just pile in here and everybody’s working shoulder to shoulder. But that doesn’t work any more,” said Zielinski.

They have also established routes in the arena to control the flow of traffic and food, from the loading dock to kitchen to meal assembly line.

For Zielinski, it’s a “little foreshadowing, for sure.”

“We don’t really know exactly but I can tell you that we’ve had put a lot of conversation into how we will manage this once we do get back to business, because obviously it’s going to be a different set of circumstances. We don’t even know the answer to that yet but we’re going to be ready for whichever version comes.”

The chefs stay in the kitchen. Others take the food from the kitchen to the arena floor to be assembled and packaged into meals.

On the arena floor, more than a dozen tables are spaced out in two rows. The food is brought out from the kitchen and the meals are assembled at the different stations and packed into takeaway containers complete with stickers.

Music pumps out of arena speakers but that’s about the only leftover from the games or concerts that used to regularly fill the 19,800-capacity venue. Most lights are turned off, so the higher levels of the arena disappear into darkness.

Staffers wear gloves and masks as they assemble the meals. Hand sanitzer dispensers are nearby. Most doors in the arena have been propped open, to reduce the need for touching surfaces.

Others MLSE employees are working remotely at home to help in other ways.

“There’s a lot of people behind the scenes that are actually doing a lot of the logistics,” said Friisdahl.

The menu depends on donations and suppliers with some of the food coming from Second Harvest, a food rescue charity that recovers unsold food before it becomes waste and redistributes it to social service organizations.

“We’re essentially operating as their kitchen right now — the kitchen of many shelters,” said Zielinski.

The MLSE chefs look at their supplies, then put their heads together and decide what they can make into a healthy meal.

Once cooked, the food is cooled in fridges, then assembled quickly and covered, wrapped and refrigerated again to await distribution and reheating.

Everybody said ‘we’re in’


MLSE started discussing the idea some three weeks ago, drawing first on some familiar names in Bell Canada and Rogers Communications, both part-owners of MLSE, as well as major sponsors Scotiabank and Tangerine bank.

“They all immediately said ‘We’re in,”’ said Friisdahl.

“The way they have managed this has been genius, really,” Second Harvest CEO Lori Nikkel said of the MLSE endeavour.

“These individually packaged meals are critical. And we didn’t have any to give out,” she added.

In addition to shelters and community agencies, the meals will delivered to hospitals during shift changes, to catch people going home after a long day’s work and provide a meal for four.

“We wanted to identify both of those areas as key needs,” said Friisdahl. “And we wanted MLSE to really lead that initiative and use the infrastructure that we have in the most effective way to deliver on that.”

The arena, at the site of the Canada Post Delivery Building, is built on history.

Leaf historian Mike Ferriman notes that the site was turned over to the government during the Second World War to be used as a military depot.

Once again it has been repurposed as the world battles another foe.