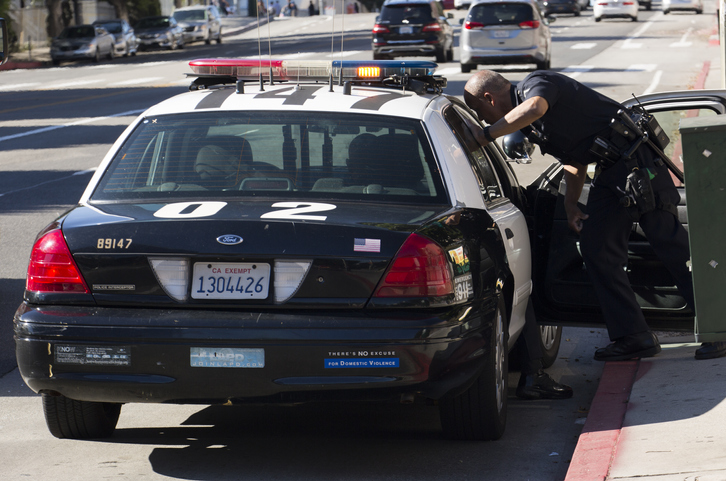 A Los Angeles Police Department officer talks to an occupant inside of his squad car. Photo: Getty Images

A Los Angeles police officer is under investigation after a random review of body camera footage showed him fondling a dead woman’s breasts, according to a person briefed on the incident.

The Los Angeles Police Department officer and a partner had responded to a report of a body at a residence, the person said. The officer fondled the corpse’s breasts when his partner was not in the room.

The person, who was not authorized to publicly discuss the case and spoke to The Associated Press on condition of anonymity, said officials conducted a random inspection of the officer’s body camera videos and found the incriminating footage.

The officer had disabled the body camera but the act was caught on video when he turned it back on, the person said, because the devices have two-minute buffering periods to capture what happens right before they are activated.

Josh Rubenstein, an LAPD spokesman, would not comment on the allegation but said the unidentified officer has been removed from active duty while the incident is investigated.

“If this allegation is true, then the behaviour exhibited by this officer is not only wrong, but extremely disturbing, and does not align with the values we, as police officers, hold dear and these values include respect and reverence for the deceased,” the Los Angeles Police Protective League, the union that represents rank-and-file officers, said in a statement. “This behaviour has no place in law enforcement.”

The person did not know when the incident occurred or when it was discovered. It is not clear how long the officer fondled the corpse or what prompted him to turn the camera back on.