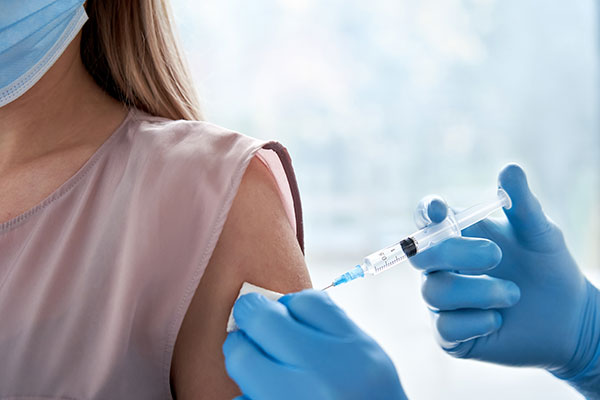 Some businesses are taking a cautious approach, he said, asking staff to volunteer their vaccination status. (insta_photos/Adobe Stock)

Canada could begin loosening COVID-19 restrictions when more than half the population has received a first vaccine dose, the head of the country’s immunity committee said Monday, as hard-hit Alberta signalled more public health rules would be coming Tuesday.

Premier Jason Kenney said the impetus for more restrictions in Alberta, the province with the highest rate of infections in the country, was a “No More Lockdowns” rodeo over the weekend. The event saw hundreds congregate without masks in open defiance of public health rules.

“I was very disturbed. Actually I was angered,” Kenney told a news conference Monday.

“Given the issues we saw this weekend, and the record high cases recorded, we are developing a package of stronger public health measures.

“The next few weeks are critical.”

Can COVID-19 vaccinations be a requirement of new recruits?

The United Kingdom, like Canada, made a decision to delay second vaccine doses in favour of wider coverage. The U.K. has vaccinated more than half its population against COVID-19 and has so far been successful in curbing a third wave, Evans said.

As for public health measures, “I think we may see an opportunity to dial those back when we get to 50, 60 per cent of Canadians vaccinated,” he told a House of Commons committee.

But he noted that because fewer Canadians per capita were infected with COVID-19 than in the U.K., it may take more vaccination here — between 60 and 65 per cent. Currently, about 33 per cent of all Canadians are vaccinated with at least one dose.

Canada’s national vaccine expert committee also weighed in on the one-shot Johnson & Johnson vaccine Monday, saying it should be offered only to Canadians 30 and up who don’t want to wait for a different shot.

The National Advisory Committee on Immunization said in an update that the mRNA vaccines made by Pfizer-BioNTech and Moderna are still preferred due to “the excellent protection they provide and the absence of safety signals of concern.”

The age guidance is similar to that issued for the Oxford-AstraZeneca vaccine and comes as both are suspected of causing a new and very rare blood-clotting syndrome.

However, the recommendations noted that as a single-shot vaccine, Johnson & Johnson may be suited for populations who are harder to schedule for a second dose or who don’t want to wait.

Plans to distribute the first shipment of the J&J vaccine were put on hold after Health Canada learned part of it was made at a Maryland facility cited for safety and quality-control violations.

Ontario promises vaccine access for all adults by end of May

That did not stop several provinces from expanding their inoculation programs Monday thanks to an anticipated increase in deliveries from another key vaccine maker. With shipments of the Pfizer-BioNTech vaccine expected to roughly double from about one million to two million per week, Ontario, Quebec, Manitoba and Nova Scotia opened access to new age groups.

Quebec and Nova Scotia lowered the age of eligibility for vaccines, while Manitoba announced that all Indigenous adults could now get a shot.

Alberta also said it would start including teachers, child-care workers and support staff for vaccine priority.

Ontario opened vaccine appointments to those 18 and over living in designated hot spots, although some residents reported difficulties in finding a spot. More than 73,000 appointments were booked in the first two hours after the province expanded eligibility.

Health Minister Christine Elliott said she was happy with how it was going overall and urged those experiencing problems to try again. “You will get an appointment, but I am sorry about the problems people are having now,” she told reporters.

Data from the Public Health Agency of Canada showed that the vaccines appear to offer a high degree of protection from infection beginning two weeks after inoculation.

The agency said that as of April 26, 2,274 people were diagnosed with COVID-19 at least two weeks after getting their first dose of a COVID-19 vaccine. Data suggests about 7.1 million people were 14 or more days past being vaccinated with at least one dose by that date, meaning there were so-called breakthrough infections in about 0.03 per cent of people vaccinated.

Among those infected after vaccination, 203 people ended up in hospital and 53 died. The agency said that the “percentage of breakthrough cases is small” and detailed data is not yet available to fully understand the reasons behind them.

The expanded vaccine access comes as several provinces are struggling to contain a deadly third wave of the novel coronavirus.

In the North, Nunavut suspended its common travel area with the Northwest Territories, where a COVID-19 outbreak at an elementary school in Yellowknife caused the closure of all schools in the city. City council in Iqaluit, Nunavut, also declared a local state of emergency after the total number of active cases in the city of 8,000 people rose to 81.

There was better news in Quebec, which announced last week it was easing some public health restrictions amid stable or declining case counts and hospitalizations. Most elementary students in the Quebec City area returned to in-person classes Monday, while the curfew in Montreal and Laval was pushed back from 8 p.m. to 9:30 p.m., beginning Monday night.

The province had 2,174 new cases over three days and 15 more deaths.

With files from Mia Rabson, Holly McKenzie-Sutter and Shawn Jeffords