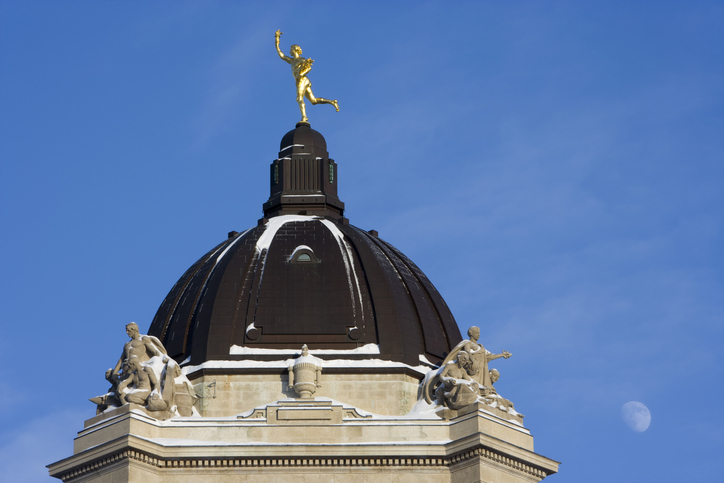 The famous Golden Boy on top of the provincial legislature in Winnipeg. Photo: Getty Images

The Manitoba government is planning to set limits on salaries paid to executives in the public sector and is not ruling out cutting some current wage levels.

The Progressive Conservative government introduced a bill in the legislature Wednesday to set “a compensation framework” for senior officials at Crown corporations, school divisions, health authorities and other public bodies.

The government will use a consultant to determine a salary range for different jobs, Finance Minister Scott Fielding said.

“There’s a whole number of variables, but we want to make sure that there’s consistency with what executives are being paid,” he said.

If a public body were to ignore the cap, it could see its funding clawed back under the proposed law.

The bill comes several months after Education Minister Kelvin Goertzen sparred with the Winnipeg School Division. Goertzen took to social media to highlight that almost 200 division staff were making $100,000 a year or more. The superintendent’s pay was listed at over $250,000.

Mark Wasyliw, a former school trustee who is the Opposition NDP finance critic, said if the government wants to cap salaries, it should also look at the private sector.

“Right now in the public sector, in order to hire people of that stature and experience, they often have to meet market rates,” Wasyliw said.

Fielding said the bill is based on legislation in Alberta. Last June, Alberta reduced almost all salaries paid to school superintendents after a review determined they were earning too much. Severance payments and retirement allowances were also diminished.

Fielding said it is too early to say whether such cuts will come in Manitoba.

The bill contains several other provisions. One would allow the province to set new financial reporting requirements for municipalities.

That measure is aimed at harmonizing accounting practices, such as ensuring fiscal years at both levels of government end at the same time, he said.