Real gross domestic product (GDP) increased by 0.1 per cent in November, according to Statistics Canada — offsetting most of the decline in the economy from October.

Increases in 15 of 20 industrial sectors offset what the agency called notable declines in mining, quarrying, oil and gas and the transportation and warehousing sectors. It pinned the blame for those declines on railway labour disruptions and crude oil pipeline transportation issues.

Unseasonably cold weather in November across central Canada played a major role in the GDP increase — as there was a 2.1 per cent rise in utilities. That’s the highest figure the sector has seen in more than a year.

Mining, quarry and oil and gas extraction down

The mining, quarrying and oil and gas extraction sector decreased 1.4 per cent in November. Mining and quarrying except oil and gas (down 4.0 per cent) contributed the most to the decline as non-metallic minerals (down 8.6 per cent) fell for the fifth time in six months. Potash mining declined 18.2 per cent because of the temporary closure of a number of mines in Saskatchewan stemming from weaker international demand. Metal ore mining was down 2.8%, with declines in iron ore (down 12.9 per cent) and copper, nickel and zinc (down 3.1 per cent) mining.

Support activities for mining, and oil and gas extraction were down 5.5 per cent from lower rigging and drilling services.

Increases in durable manufacturing can be attributed to growth in transportation equipment (up 3.4 per cent), specifically in motor vehicles and parts, as many establishments ramped up the pace of their activities following labour disruptions in previous months. These increases were partially offset by losses in electrical equipment (down 8.1 per cent) and primary metals (down 2.7 per cent) manufacturing, with many enterprises being negatively affected by interruptions in rail transportation. 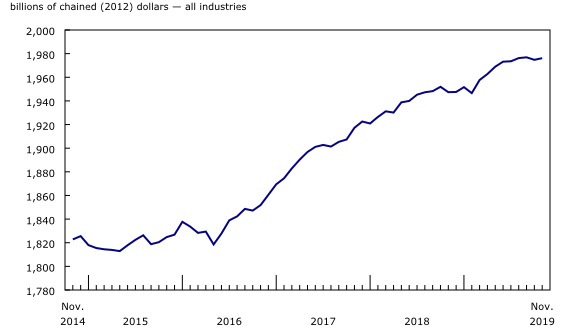