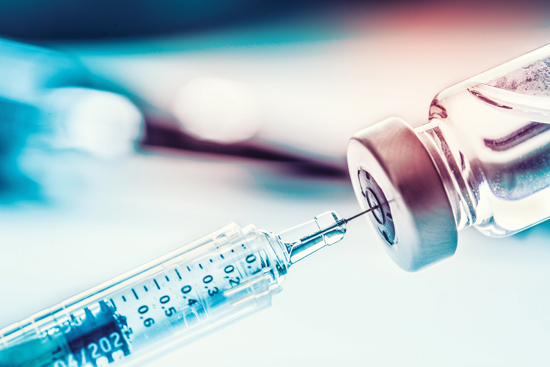 TORONTO — Ontario’s top doctor wants to end workplace COVID-19 vaccination policies by early next month when proof-of-vaccination rules will lift in other businesses and indoor settings.

Now that COVID-19 hospitalizations and other indicators are improving, Dr. Kieran Moore said Thursday that he’s reviewing letters of instruction sent last year to various sectors including hospitals and post-secondary institutions, which required that they develop immunization policies.

“We do think the highest risk is behind us, that we’re heading into a lower risk environment, and that the need for vaccination policies across Ontario sectors, whether it’s health, or in colleges and universities, is no longer necessary,” Moore said at a news conference.

“I do think we should align their removal with the removal at a population level, so on March 1. That may be early for some organizations, but that’s my goal.”

Most sectors were instructed to require people to get regularly tested for the virus if they are not vaccinated, but many took their policies further and required all workers get the shots.

More than a dozen hospitals told The Canadian Press this week that they intend to keep mandates for workers in place when the vaccine certificate system ends.

Long-term care is the only sector in Ontario that has mandated workers get vaccinated against COVID-19, but Moore said Thursday that the directive from the sector did not come from him, so it wouldn’t be included in the rollback of other vaccination policies.

He also did not specify whether a vaccinate-or-test policy would remain for school employees. Education workers who aren’t vaccinated currently have to take regular virus tests.

Moore’s remarks came as the province rolled back capacity restrictions affecting many businesses a few days ahead of schedule.

His comments also came days after Premier Doug Ford said he’s eager to end all pandemic-related mandates and “move forward” from the pandemic because people are “done” with public health restrictions.

Ford and Moore have denied that their recent shift to accelerate the end of COVID-19 measures has been motivated by a rash of protests across the country aimed at forcing governments to do that.

The province hasn’t yet set a date for when it will lift masking in public spaces and schools, but Moore said Thursday he would begin reviewing the policy and make a decision in the second or third week of March once other restrictions are lifted.

Moore didn’t give specific details on how the province plans to handle any future surge in cases but said the province has learned from the last two years of the pandemic and has new tools such as vaccinations to fight off the virus.

Businesses said the mood was positive on Thursday as capacity limits lifted in gyms, restaurants, cinemas and others that still accept proof-of-vaccination, but some remained cautious about barrelling ahead with reopening.

“It definitely is a happy day. It’s the first time in about two years that we’re finally seeing the light at the end of the tunnel for these poor small businesses,” said Julie Kwiecinski, director of provincial affairs, Ontario, for the Canadian Federation of Independent Business.

Despite that, she said operators are concerned about consumer confidence and they want the government to encourage people to get out and patronize businesses safely.

Kwiecinski said business owners also want a “stay open” plan from the government about how it will avoid future shutdowns if cases surge and threaten the health system again, especially in the fall after June’s provincial election.

“As much as we all want to jump for joy and say this is over, I think everybody realizes that it’s not over, that it’s a matter of how you manage it going forward,” she said. “We definitely need to see from this government what their plans are for staying open.”

Still, some Ontario businesses intended to keep them in place a while longer, even if the province doesn’t require them.

Mandy Brouse, who co-owns Words Worth Books in Waterloo, Ont., said her store would remain at close to 50 per cent capacity for the next little while.

“We’ve always stayed a step behind any of the mandates, mostly because we want to really keep our staff and customers safe,” she said in an interview.

“We do have some immunocompromised staff members at our store, so their health and safety … are at the forefront of my mind.”

She said customers have sent in positive feedback about the business’ slow reopening plan. The store might decide to expand capacity if staff are comfortable with it and virus indicators in the area improve, but Brouse said a cautious approach has served the store well so far.

James Rilett, vice president of central Canada for Restaurants Canada, said some restaurants might consider keeping vaccine passports and social distancing rules in place, but such decisions are difficult to make after years of revenue difficulties from the pandemic.

“It’s a tough thing to turn down customers when you’re facing such a mountain of debt,” he said.

Recent comments by Moore about the reduced effectiveness of vaccine passports against the Omicron variant have also made it tough to continue enforcing them, Rilett said.

“It puts them in a difficult position, even if they want to do that,” he said.