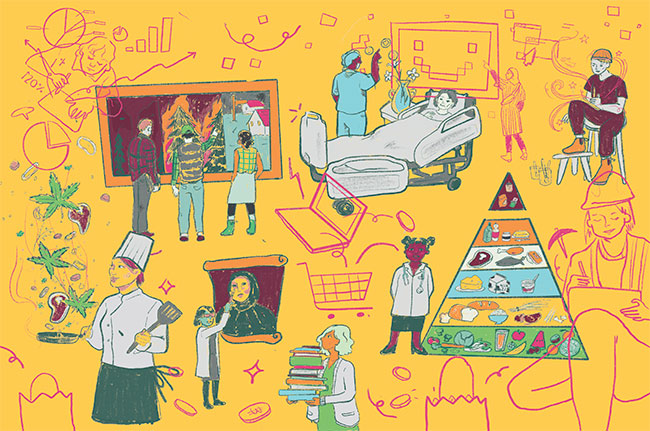 As COVID-19 has reminded us, changes to how we live and work can be sudden and difficult to react to.

While there is no way to see into the future, there are signals of what might come that can be useful indications of how to plan ahead.

This is why the Brookfield Institute for Innovation and Entrepreneurship (BII+E) developed an occupations and skills forecast fundamentally based on those signals — and how those paying attention to labour market information (LMI) react to them.


The Forecast of Canadian Occupational Growth (FCOG) and its accompanying report Ahead by a Decade was constructed in three stages.

The first stage utilized horizon scanning to identify broad trends that might affect the Canadian labour economy in the next 10 to 15 years. This process involved surveying over 600 signals from academic journals, popular media and fringe sources, then aggregating them.

Then in organized workshops across the country, a variety of LMI experts discussed the impact of these trends on the future of work.

For 45 carefully selected occupations, participants were asked to use what they had learned to predict whether an occupation would grow in employment share, stay the same or shrink.

Finally, a machine-learning model was employed to predict what portion of experts would have said grow or decline for the remaining 440 occupations in our forecast, based on each occupation’s skills composition.

That means roughly one in three Canadians are employed in an occupation that will change in some way.

In broad strokes, occupations projected to grow require specific technical skills, creativity and — for many — a capacity to help others.

Occupations that are declining are often the ones with the highest employment in industries such as manufacturing, agriculture and mining — farm workers, vehicle assemblers, inspectors and testers. They tend to not be very specialized and are less likely to require post-secondary education.


At its core, the model is based on the skill, ability and knowledge requirements of an occupation.

For example, when the model understands that knowledge of medicine is required for an occupation, it may increase or decrease its prediction based on what it has seen before.

A few traits always increase the model’s prediction, but most skills are only useful when combined with other skills.


Five unique skills and abilities are always helpful, according to the research. These foundational skills are: fluency of ideas, memorization, persuasion, instruction and service orientation.

The first thing to notice is that three of these are social skills. Instruction is one’s skill in teaching or coaching others; persuasion refers to one’s skill in changing others minds or behaviour; and service orientation represents how skilled one is in actively looking for ways to help.

It is hard to imagine a senior position in any field that does not require those three skills.

The remaining two are cognitive abilities: memorization — representing general information recall, and fluency of ideas — representing the ability to brainstorm.

Together, these abilities highlight a long-standing debate in education: Should we focus on teaching our children creativity and thinking outside the box, or knowledge retention?

The model suggests that these are not mutually exclusive, but rather both abilities are needed.

A common narrative is that with the prevalence of the Internet and personal computers, individuals do not have to know as many things off the top of their heads. However, for many technical disciplines it would take far too long to look something up every time. For example, no one could be a nurse (one of our growing occupations) without significant information recall abilities.

Even a programmer requires a certain level of information recall. It takes a long time to write code if you are constantly looking up syntax and you have to know enough to write a useful query.

This is not to say that the ability to brainstorm is not important.

In any discipline where there are constantly new and unique problems to solve — such as the two mentioned here — or even other less technical disciplines, there is always a need for new, creative ideas to address the variety of problems that arise.


A major focus of this research was to look at who was employed in occupations projected to grow or decline.

Findings reveal that risks and opportunities are distributed unequally across demographic groups, which means that programs and investments must recognize these differences in order to be effective and promote equality.

Some of these findings include:

This forecast was built to help policy and decision makers think about how skills and occupations will change in the future.

For those interested in preparing the next generation for the future of work and whatever it may bring: Let’s teach our kids how to help each other, learn effectively and be creative.

Joshua Zachariah is an economist with the Brookfield Institute for Innovation + Entrepreneurship in Toronto.

Related
Year end staff vacation crunch? Tips for business owners
Why do leaders have stronger feelings of inclusion than employees?
Employers will need new policies, practices to tackle shift to work from home
Grocers Loblaw and Metro ending wage premium due to pandemic for workers
Tags