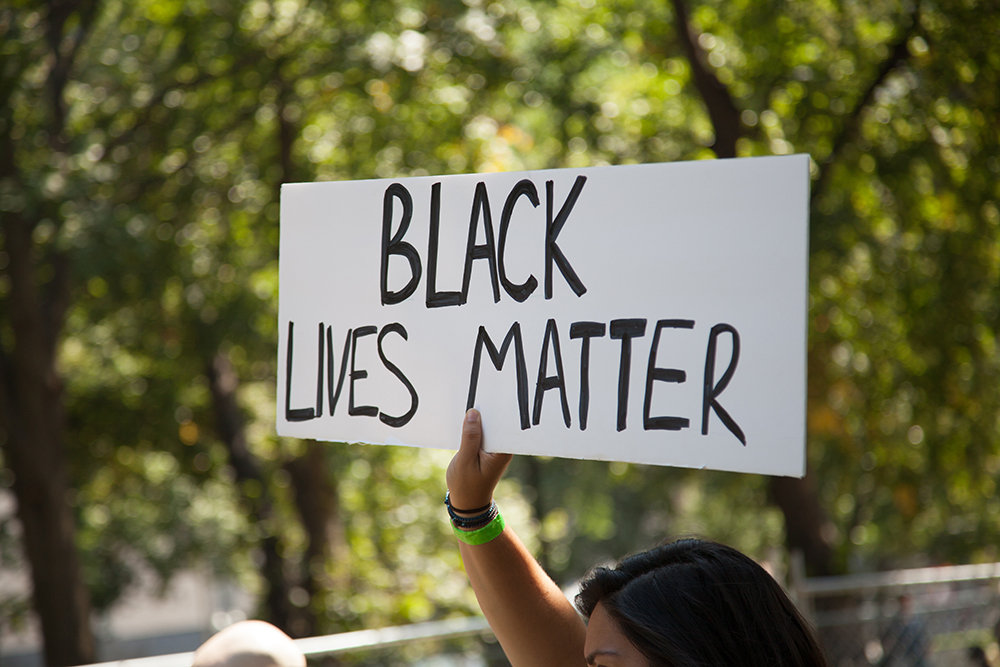 After hitting the streets to protest racial injustices, Sharon Chuter was disillusioned by the number of corporate brands posting “glossy” messages spouting support for black lives.

The 33-year-old founder of Uoma Beauty, a cosmetics company that caters to black women, came up with a social media challenge to test the sincerity of the companies: She launched the #pulluporshutup campaign on Instagram to push brands to reveal the racial makeup of their corporate workforce and executives.

The hashtag has since gone viral, amassing nearly 100,000 Instagram followers in a week. Chuter said it’s a wake-up call for many businesses who couldn’t see or didn’t take seriously enough the silent racism and prejudices that hold black people back in their own workplaces.

“Reflection is painful,” Chuter said. “The truth hurts and I just felt like brands didn’t want to do it.”

As protests over police brutality have erupted across the United States over the past two weeks, The Associated Press reviewed the diversity reports of some of the biggest companies pledging solidarity with their black employees as well as the black community, and found that their efforts to recruit, maintain and promote minorities within their own ranks have fallen short.

Microsoft has been posting powerful quotes on Twitter from black employees describing how systemic racism takes a toll on their lives. One employee, Phil Terrill, talked about the death of George Floyd, a handcuffed black man who pleaded for air as a white Minneapolis police officer pressed his knee against Floyd’s neck for several minutes, sparking protests around the globe.

“It should not take the death of Black people at this magnitude to inspire everyone to be an ally,” Terrill is quoted as saying.

Only 4.4 per cent of Microsoft’s global workforce across all brands, including retail and warehouse workers, identify as black.

And less than three per cent of its U.S. executives, directors and managers are black, according to the company’s 2019 diversity and inclusion report.

Microsoft CEO Satya Nadella addressed the issue in an email to employees, saying the company “must change first” if it wants to help change the world, and that it’s investing in its talent pipeline by expanding connections with Historically Black Colleges and Universities.

“In order to be successful as a business in empowering everyone on the planet, we need to reflect the world we serve,” Nadella said.

Amazon is prominently displaying “Black lives matter” on its platforms and its CEO Jeff Bezos has been posting on Instagram racist emails he’s received from consumers who are unhappy with the company for taking a stance.

But the company itself has been accused of hypocrisy for the troubling conditions reported by warehouse workers during the coronavirus pandemic. An AP analysis found that more than 60 per cent of warehouse and delivery workers in most cities are people of colour. Amazon’s 2019 workforce data shows about eight per cent of its managers in the U.S. are black, compared to nearly the 60 per cent of managers who are white.

Courtenay Brown, 29, who sorts packages at the Amazon fulfilmentcentre in Avenel, New Jersey, said she feels that Amazon’s messages supporting justice and equal opportunity for blacks are not genuine. She said that most of the employees she works with at the centre are people of colour, but the higher-ups are white.

“As a black woman, I feel like it is empty words,” she said. “They don’t help our struggles. Everyone wants to join in and profit from us.”

In the U.S., black people account for 12 per cent of the overall workforce, but only eight per cent of management jobs, said University of Virginia professor Laura Morgan Roberts. The number of black CEOs of Fortune 500 companies peaked in 2002 with 12. Today there are just four.

Roberts’ research looking at the careers of Harvard business school graduates found black alums got fewer prime opportunities, such as global assignments, than white graduates with the same degree.

“They’re saying, `We’ve got the qualifications but we can’t get into the inner circle,”’ Roberts said.

Adidas, which responded to Floyd’s death and subsequent protests by crossing out the word “Racism” on an Instagram post, acknowledged its own shortcomings after a growing group of employees called out the company for its lack of diversity.

On Tuesday Adidas unveiled several moves to fight racial inequality, including a pledge to fill at least 30 per cent of all new positions in the U.S. at Adidas and Reebok with black and Latino people. It said it will also be announcing a goal aimed at increasing representation of black and Latino people within its workforce in North America.

“The events of the past two weeks have caused all of us to reflect on what we can do to confront the cultural and systemic forces that sustain racism,” said Adidas CEO Kasper Rorsted in a statement. “We have had to look inward to ourselves as individuals and our organization and reflect on systems that disadvantage and silence black individuals and communities.”

The Germany-based company didn’t provide a breakdown on the race or ethnicity of its workforce.

Nike has long been viewed as an “insider” brand among black consumers because of its lucrative and high-profile sponsorship deals with prominent African American athletes.

The Portland, Oregon-area company famously took on the racial injustice issue head-on with its ad campaign featuring former NFL quarterback Colin Kaepernick. Last week, it revealed a new video ad in response to the protests that bore the words: “For once, don’t do it.” The ad, a twist on its “Do it” motto, urged viewers not to “pretend there’s not a problem in America.”

Yet a look at who is leading the corporate business shows a disconnect between what the brand projects and how it actually operates.

Though whites make up less than half — 43 per cent — of its total U.S. workforce, 77 per cent of its high-ranking vice-presidents company-wide are white, according to Nike’s 2019 numbers on representation in its leadership. Meanwhile, just under 10 per cent of vice-presidents are black. But that is still a nearly two percentage point improvement from the previous year.

CEO John Donahoe acknowledged that such progress wasn’t enough, saying in a memo to employees that its “most important priority is to get our own house in order.”