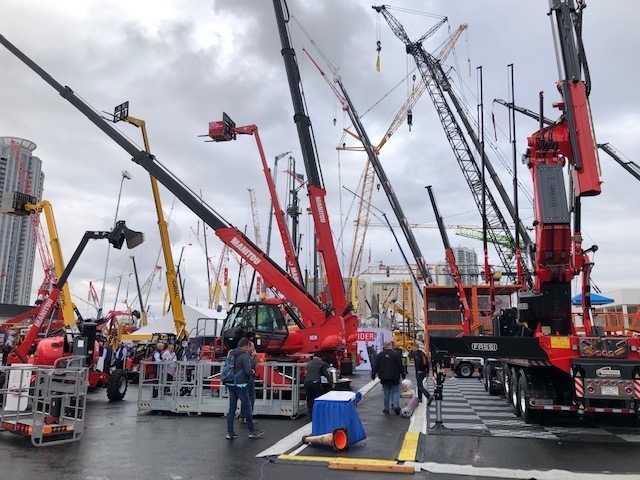 Cranes on display at the festival grounds at ConExpo-Con/AGG 2020 in Las Vegas. Photo: Todd Humber

I’m getting on a plane today.

A few months ago, that would be a blasé statement. Maybe even a little braggy – an Instagrammable “look where I’m going now” moment.

In the coronavirus era, though, it stands as an act of open defiance. Or stupidity, depending on whom you ask. The true dangers of COVID-19 remain unknown, but the hysteria around it is very well quantified. Toilet paper, anyone?

Scenes from a tradeshow floor

I’m writing this from the pyramid of the Luxor in Las Vegas. I spent the day yesterday at ConExpo, a massive tradeshow that happens every three years and was expected to draw north of 130,000 attendees.

The team from Annex Business Media – including the editorial and sales staff from Rock to Road and Crane & Hoist were out in full force. While attendance was healthy, there was a heavy dose of “it’s a lot quieter this year” from the sponsors and exhibitors we spoke with on the floor.

Andrew Snook, the editor of Rock to Road magazine and a ConExpo veteran, stood agog when the doors of the tradeshow opened and only a trickle of people could be seen wandering in. Camera in hand, he was ready to grab the often very cool photo of the initial crush.

I haven’t seen his shots from 2020, but there’s probably some tumbleweed involved. It truly looked like a tradeshow attended by 100, not 100,000.

While the crush of people eventually came later in the day, official numbers are hard to come by — and often unreliable. An unscientific poll of exhibitors put the estimates at 20 per cent to 30 per cent no-shows.

That lines up well with my flight from Toronto to Vegas which, two months ago, was sold out but was at least one-third empty when it went wheels up. I had the luxury of not having an empty seat next to me — something so extraordinary I remember exactly the last time it happened: A winter’s flight to Edmonton in 2012. 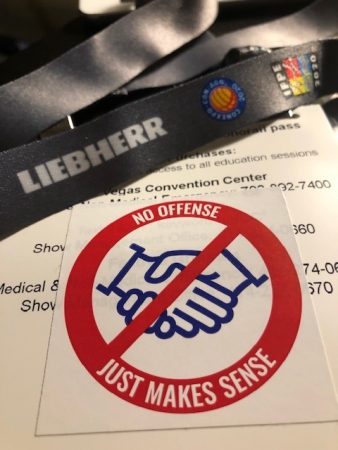 Every conversation we had, without exception, turned to COVID-19 at one point or another.

Easier said than done, though. It is surprisingly hard not to shake someone’s hand when greeting them.

Laura Goodwin, the sales rep who works on Rock to Road, was a boss at deflecting — even slapping people’s hands out of the way when offered to others. Me? Not so much. I’d shake enthusiastically, nodding in agreement that fears are overblown, while counting down the seconds until I could quietly reach into my pocket for that hand sanitizer.

Better safe than sorry, I figured.

What we’re seeing play out in Las Vegas at ConExpo is being echoed across the events and convention industries.

The Seafood Expo in Boston was cancelled earlier this month — last year, it attracted 20,000 people. In the forestry world, PaperCon 2020 was postponed. It was set to take place in April in Atlanta.

You won’t have to look far to find cancelled events. There are too many to list, and the fear has spread beyond industry events to mainstream festivals. Coachella, the massive music festival that draws 600,000 people to California, was moved from April to October.

The luck of the Irish has even run out — Ireland cancelled all its St. Patrick’s Day parades. So did Boston.

None of this is good news for the economy. You can read the economics arguments elsewhere, but you don’t need a PhD to understand that business gets done on the floor of tradeshows.

Massive orders are filled. New deals are struck. Relationships are solidified. When that stops happening, organizations suffer. On a wider scale, with a service economy that relies on people travelling, going out to dinner and shopping – things can quickly grind to a halt.

To travel or not?

For employers, particularly those in HR and senior management roles, the travel question is a difficult one.

Flying to China, Italy or Iran? That’s a firm and easy no.

Everything else is shades of grey, and should be judged on a case-by-case basis — following local conditions and warnings from relevant authorities.

The best advice at the moment is this: HR and management should make it clear to all employees that travel is optional, and staff can opt out without repercussions until things improve and return to normal.

That has to be a firm, strong statement from management – no nudge-nudge, wink-wink that if you don’t go, there may be an unwritten penalty.

And keep washing those hands.

Related
4 things employers can do as coronavirus spreads
Employees travelling for work exposed to more risks than ever
Are you afraid to travel? Conferences, tradeshows seek to reassure attendees
Spotty sick leave policies limit options for avoiding virus
Tags