While the court recognized that losing one’s source of income certainly causes both emotional and financial stress, it was nevertheless regarded as a form of harm that can be repaired. 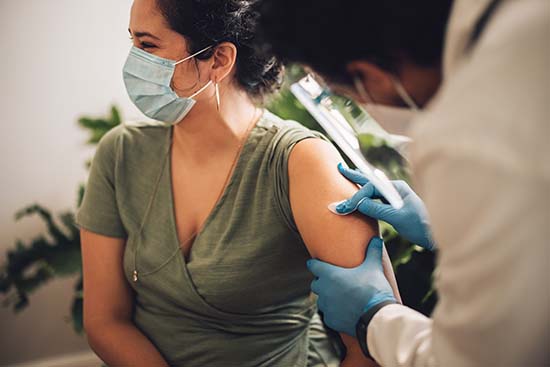 As vaccine mandates continue to proliferate Canadian workplaces, legal decisions such as this will prove increasingly valuable. (Jacob Lund/Adobe Stock)

The Federal Court of Canada recently ruled that vaccine mandates do not “force” employees to get vaccinated.

Rather, workplace vaccination policies force employees to make a choice between being vaccinated or remaining unvaccinated and losing that particular source of income.

As vaccine mandates continue to proliferate Canadian workplaces, decisions such as this will prove increasingly valuable.

While the Vaccination Policy provides an exemption for employees who are “unable to be fully vaccinated based upon a certified medical contraindication, religion, or other prohibited ground of discrimination as defined under the Canadian Human Rights Act,” such exemption did not apply to the Applicants. Rather, the Applicants simply did not want to be vaccinated and/or disclose their vaccination status to their employers.

With this heated and controversial backdrop, the Federal Court was tasked with determining whether the injunction or “temporary halt” against the Government of Canada’s vaccination mandate should be granted.

In the federal public service, employment relationships are governed by collective agreements and federal legislation, such as the Federal Public Sector Labour Relations Act (FPSLRA). The Supreme Court of Canada has ruled that where Parliament has established a method by which labour disputes are to be resolved, such process should not be interfered with by the courts.

In other words, employment-related disputes dealing with the federal public service should not be brought to the courts. Rather, employees can file grievances and present their issues in front of a labour adjudicator or the Federal Public Sector Labour Relations Board.

While the courts can sometimes be an appropriate vehicle for resolving employment-related disputes, there must be a gap in labour adjudication that will deprive the parties of a resolution.

In the case at hand, the Applicants sought several remedies, including the cancellation of the federal government’s Vaccination Policy, a declaration that their rights under the Canadian Charter of Rights and Freedoms had been violated by the policy, reinstatement, and reimbursement for lost wages. The court found that these were remedies which could be sought from a labour adjudicator, or the Federal Public Sector Labour Relations Board, meaning there was no gap that required the courts to step in.

The Applicants also argued that there was more at stake for them than the loss of their income when it came to the Vaccination Policy. From their point of view, their case was less about income and more about their right to refuse medical treatment “without the threat of financial reprisal, stigma, and social isolation.” It is for this reason that the Applicants sought an immediate court injunction.

In response, the Federal Court stated that the Vaccination Policy did not force the Applicants to get vaccinated. Rather, the policy forced the Applicants to make a choice between receiving the vaccine and continuing to have an income, or refusing to be vaccinated and losing that source of income. Indeed, the court succinctly stated vaccine mandates do not cause irreparable harm, because they in no way force employees to be vaccinated.

While the court recognized that losing one’s source of income certainly causes both emotional and financial stress, it was nevertheless regarded as a form of harm that can be repaired. For example, the loss of income could be compensated for through monetary damages, a remedy that can be pursued through the labour arbitration process. As a consequence, the Federal Court determined that the Applicants did not demonstrate that they would suffer irreparable harm if the injunction was not granted.

For these reasons, the Federal Court ultimately refused to halt the Government of Canada’s Vaccination Policy.

It is no secret that vaccine mandates have become one of the most divisive topics in Canadian workplaces, and this trend is likely to continue.

While the case referred to in this article relates to federal public servants, all employers looking to implement vaccination policies need to understand their legal implications.

Accordingly, employers should obtain expert legal advice when drafting and implementing such policies in the workplace.