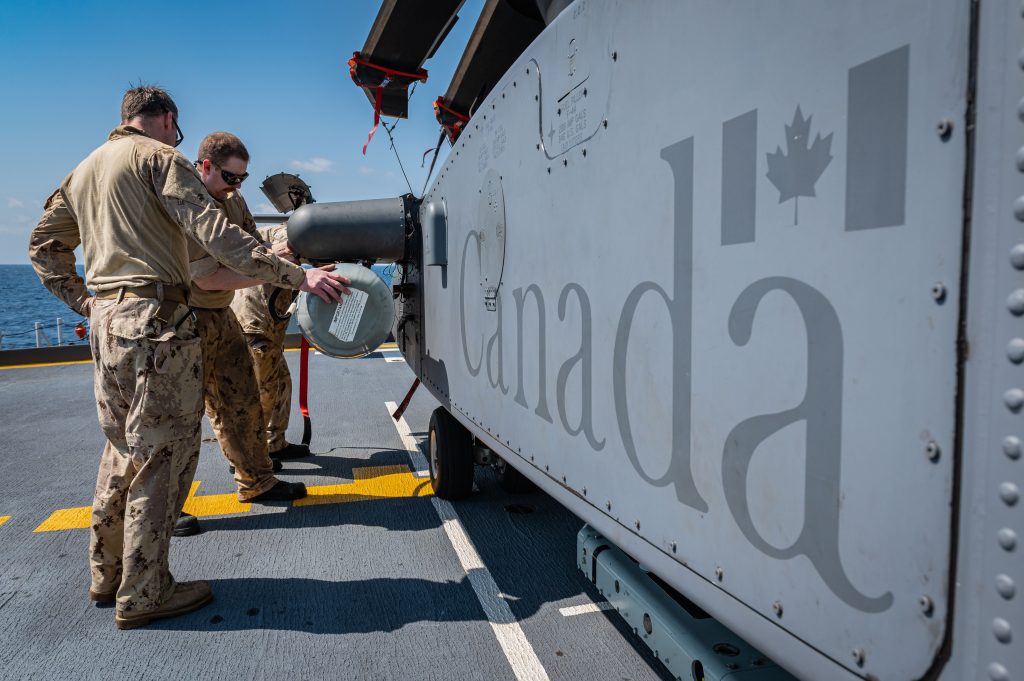 Members of the Helicopter Air Detachment onboard HMCS MONTREAL arm a torpedo on a CH-148 Cyclone helicopter during Operation REASSURANCE, in the Mediterranean Sea on March 26, 2022. Photo by: Corporal Braden Trudeau, Canadian Armed Forces

The Canadian Armed Forces says over three-quarters of the more than 1,300 service members who applied for an exemption from the military’s COVID-19 vaccine requirement have had their requests denied.

Vice-chief of the defence staff Lt.-Gen. Frances Allen revealed the figure during testimony to a parliamentary committee this week, in which she also sidestepped questions about what will happen to those troops if the vaccine requirement is lifted.

Chief of the defence staff Gen. Wayne Eyre ordered all military personnel to be fully vaccinated by mid-October to protect the Canadian Armed Forces from COVID-19. The deadline was later extended to mid-December.

While most service members complied with the order, with the Defence Department reporting more than 98 per cent of Canadian troops had chosen to get vaccinated, hundreds of others did not.

Allen told the House of Commons defence committee that of the more than 1,300 Armed Forces members who applied an exemption from the requirement for medical or religious reasons, only 158 had their requests approved.

Of the remaining requests, Allen said 980 were denied while another 160 are still under review.

Only a handful have been forced out

Despite the large number of denials, only a handful of military personnel have been forced to hang up their uniforms to date.

The Defence Department last week reported that 39 Armed Forces members have been involuntarily released since December, though another 206 are in the process of being forced out of the military.

Ninety-four full-time members had voluntarily hung up their uniforms rather than get vaccinated, the department added. The number of part-time reservists who have chosen to leave — or are in danger of being kicked out — wasn’t available.

Senior commanders have also provided numerous warnings, counselling sessions and other efforts to convince vaccine-resistant troops to change their minds and get their jabs.

The Defence Department said nearly 1,000 troops had been issued warnings since December, while formal reviews have been launched against 445 members who continue to defy the vaccination order after other remedial measures have been exhausted.

Allen revealed the figures as she was being grilled by Conservative committee members, who also asked what would happen to those troops forced out of uniform if or when the vaccine requirement is lifted.

“Vaccination is a requirement … for entry into the Canadian Armed Forces,” Allen said in response to a question from Conservative MP Ed Fast.

“That is the requirement at this time, unless they are unable to be vaccinated.”

Military officials also revealed that they are short about 7,500 recruits at the moment, exacerbating a growing shortage of Canadian military personnel at a time when the Armed Forces is being asked to respond to numerous crises at home and abroad.