News Culture
New offices for the hybrid era? Many companies are on board 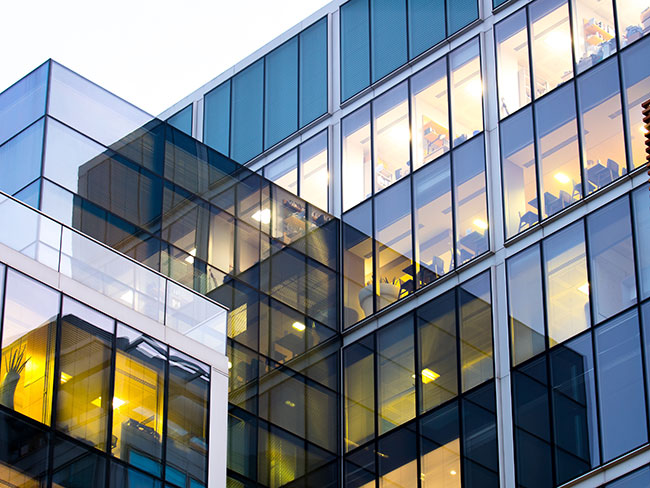 Office layout will need to be re-evaluated as businesses adjust to not having all employees at the office. (alice_photo/Adobe Stock)

OMAHA, Neb. (AP) — If you build a shiny new office building, will your employees show up to work in it?

Many U.S. companies are banking on it because they believe working in person is better for collaboration and training young employees. So even though most employees are still working from home offices and dining room tables today, some companies are willing to spend big on showplace headquarters.

Businesses recognize there is a place for offices despite the fact that they plan to give workers more flexibility to work from home and might see cost savings from limiting their real estate holdings.

In a sign of how committed companies are to keeping offices, some 57 per cent of the more than 2,300 office projects that giant architecture firm Gensler is now working on were started last year, in the middle of the pandemic. But as they’re building, companies are tweaking designs to reflect that offices may become spots that workers visit primarily to collaborate with others, instead of places where they toil all day, every day.

Jordan Goldstein, the co-firm managing principal at Gensler, said companies are placing a premium on having more meeting rooms with the technology to accommodate remote and in-person participants, as well as more flexible space for people to choose where they work within the office.

Mutual of Omaha plans to build a glassy new headquarters in its namesake Nebraska city that could wind up as Omaha’s tallest building.

But the insurance company says the plans for its new building reflect its commitment to flexible work. The company has 4,000 employees in the Omaha metro area but is planning a building that can only accommodate between 2,200 and 2,500 people on any given day, Mutual spokesman Jim Nolan said.

“The only way that works is by embracing remote and hybrid work,” he said.

The number of people working remotely is clearly growing because so many companies learned they could do it during the pandemic. The Society for Human Resource Management estimates the number of totally remote U.S. workers will double to roughly 36 million people by 2025.

But the CEO of that trade group, Johnny C. Taylor Jr., said that will still only account for a little over 20 per cent of the workforce.

The other nearly 80 per cent will work in an office at least part of the time.

Another survey done last year by CBRE Group, the world’s largest commercial real estate services and investment firm, showed that 87% of large companies planned to use a hybrid schedule after the pandemic, with workers in the office part of the time.

And separate worker surveys that SHRM and Gensler conducted last fall both showed that more than half of workers wanted to be back in the office at least one day a week.

But so far businesses have been slow to bring employees back. An average of 36.8% of the workforce was back in offices during the fourth week of February in 10 major U.S. cities monitored by Kastle Systems, which tracks building access-card swipes. That number has been creeping up since early January when it fell as low as 23% during the omicron surge.

Mutual of Omaha CEO James Blackledge said bringing people together in an office at least periodically will boost productivity and creativity, and having a gleaming new $433 million office should help the company attract new talent. Plus, the new headquarters will likely be smaller overall than Mutual’s current headquarters complex, but the exact size will be determined later in the design process.

Walmart said it was overdue for a new headquarters regardless of the pandemic because it is currently spending tens of millions of dollars every year to maintain an outdated patchwork of more than 20 offices in northwest Arkansas for its administrative and support staff.

JP Morgan CEO Jamie Dimon has said that the rise of work-from-home might mean the company only needs 60 desks for every 100 employees because they will be shared. But he remains committed to a new headquarters for 12,000 to 14,000 of the bank’s employees because many tasks will still need to be done in person.

Deluxe, the company once known primarily for printing checks that now processes nearly $3 trillion in payments a year, invested $12.2 million during the pandemic in a new 94,000-square-foot Minneapolis headquarters that opened last fall. When they return on a more regular basis later this month, employees will be expected to be there more often than they work from home.

But the new headquarters is less than one-third the size of Deluxe’s old one. The company cut its overall real estate footprint in half nationwide to better reflect its current needs with more people working remotely.

Deluxe CEO Barry McCarthy acknowledges that parts of each of his employee’s jobs can be done remotely, but coming together and being able to work as a team is a bigger element.

“There are very, very few jobs that are just individual contributor jobs with little or no interaction required from others,” he said.

McCarthy, like many CEOs, says he believes office work is better for training and mentoring younger employees because they can watch and interact with their coworkers better and get more immediate feedback on their work.

The roughly 100 headquarter workers at shoe and apparel company Merrell moved into a new office in Rockford, Michigan, in January. The project was in the works before the pandemic began, but CEO Chris Hufnagel said the company reworked the plan after it became clear that many employees would still work from home, at least part of the time. Hufnagel said he believes the office will be the “epicenter” for the company’s work.

“I think everyone realizes that there are parts of our jobs that we do better when we are together,” Hufnagel said.

And then there are companies that plan to largely do away with their offices in favor of remote work. But even those firms may keep a small office presence.

Intradiem CEO Matt McConnell said the software company had its most profitable year ever in 2021 and didn’t miss a beat while its 150 employees and 75 contractors were all working remotely. After checking with employees, the company shifted to a remote-first plan and will let its current headquarters lease expire at the end of 2022.

“It’s just this big, empty space that no one is using. It doesn’t make any sense to maintain that,” McConnell said.

But Intradiem, which is based in Alpharetta, Georgia, will likely still maintain a smaller headquarters with space for its IT workers to put together equipment to send out to home-based workers, and the company will encourage teams to occasionally get together in person. They may also rent some space at shared offices run by WeWork for employees across the country to use.

Modular flooring manufacturer Interface just opened a new headquarters in 2018, but the pandemic prompted the company to spend $400,000 remodeling the building and investing in new technology and furniture to adjust to workers only being in the office part of the time.

Darby Gracey, Interface’s director of worklife and workplace strategy, said she knows the roughly 175 headquarters workers didn’t miss commuting in Atlanta traffic while they worked from home, but the company has asked them to return at least some of the time.

“We believe a major part of culture comes from the ability to sit down and have a cup of coffee with an colleague or have a white-boarding session with a teammate — just actually getting together in person and being able to read body language — we believe that there’s a lot of value in that and it’s something we’re standing firm on,” Gracey said.