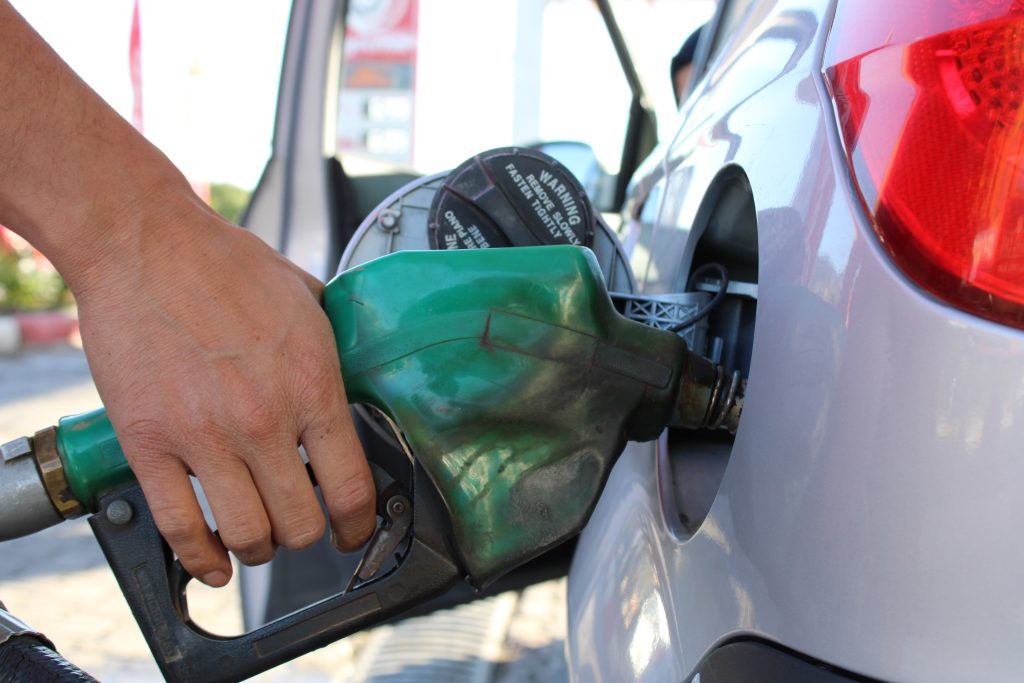 Reid, who drives for Uber and Lyft in New York, fills up his Lexus at least three times a week. He pays around $95 each time, about double what he was paying last year. To make up for that, he’s driving more often, but he’s also applying for other jobs that wouldn’t require his car.

“It’s more hours, more stress,” he said. “New York City is not an easy city to work and it’s affecting our lives.”

Reid isn’t alone. Millions of Americans who rely on their cars for work are changing their habits, signing up for carpools or even ditching their cars for bicycles as gas prices recently hit $5 per gallon for the first time ever. This week, it’s averaging $4.95 per gallon nationwide, up from $3.06 per gallon a year ago, according to AAA.

On Wednesday, President Joe Biden asked Congress to suspend federal gas taxes for three months, which would shave 18.4 cents per gallon off the price of gas. He also called on states to suspend their own gas taxes.

Jace Shoemaker-Galloway agonized over whether to charge more for Paws and Whiskers Sitters, her pet-sitting business in Macomb, Illinois. She visits as many as 10 houses each day and fills up her 2018 Mazda CX-3 almost every week. One recent fill-up cost her nearly $50.

This month, she finally acted. She contacted her clients and told them she was removing the 10 per cent discount she has always given to repeat customers.

Shoemaker-Galloway, who is also a children’s book author, said her customers were understanding. But she worries that gas prices will cut into her business in other ways.

“The cost isn’t just impacting my bottom line,” she said. “Because the price of everything is so expensive, people are cutting back on non-essentials, which means pet-sitting and book sales.”

In a normal summer, Orvilia Nieto might do some traveling in the RV she lives in in Lytle, Texas. But that might not happen this year. She is struggling to fill the tank of her 2008 Ford Expedition SUV so she can get to her job at a T.J. Maxx distribution center in San Antonio, about 20 miles away.

Nieto and her co-workers trade tips on where gas is cheapest. She sometimes carpools or fills her tank only halfway, which still costs her more than $50. But she feels lucky. A handful of colleagues on her shift, which ends at 2:30 a.m., ride their bikes home in the dark.

“It’s been a rough road,” she said. “If we lived in the city it would be easier, could take the bus, but at the end of the shift at 2:30 in the morning, what bus line is available?”

Commutes and gas prices a sticking point in recruitment

“A business owner needs to acknowledge that there is stress associated with rising gas prices,” Chapman said.

David Lewis, the CEO of Operations Inc., a Norwalk, Connecticut-based human resources consulting company, remembers handing out gas cards to his employees in 2009 when gas prices topped $4 per gallon. But this time he won’t be doing that because employees have another option: working from home.

“This is an unwelcome development for those companies that are trying to get people back to the office,” Lewis said. “It is one more reasonable reason why those employees are pushing back.”

“If you are the company that requires everyone to come in all the time, you’re a pariah,” he said.

Psychology professor Brian Cesario used to live within walking distance of the college where he teaches. But last year, he moved 55 miles away to Hopewell Junction, New York, so he could afford a larger home for his growing family.

Cesario taught remotely even before the pandemic and assumed he would continue doing so. But last fall, his college began requiring him to drive to campus twice a week, a commute that now costs him $240 in gas each month. Cesario said he doesn’t make enough to compensate for that, so he’s looking for a fully remote job outside of academia.

For those who must commute, there can be options. On Tuesday, Uber announced it was bringing back discounted shared rides in nine U.S. cities this summer, including New York, Los Angeles and Chicago. Organizations that link carpoolers — like one run by the Southeast Michigan Council of Governments in the Detroit area — say they are seeing significantly more participants.

Some are even finding solutions in their own garage. Pame Viens and her husband — both histotechnologists who prepare tissue at medical facilities — switched vehicles because his commute is longer. Now, he’s driving her 2016 Volkswagen Passat and she’s driving his 2022 Dodge Ram.

But others say they simply have to hustle harder. Brian Scheall, an Uber driver in Tampa, Florida, pays $75 every time he fills up his Volkswagen Atlas.

“You can make money but you have to work, work, work,” said Scheall. He recently took a side job driving some customers from Florida to Virginia for some extra cash.

Uber says it understands drivers are feeling the pinch from high gas prices, and it added a 45-cent to 55-cent surcharge on all trips in March to help soften the blow. But both Reid and Scheall say gig companies should be doing much more.

“It makes no difference at all. It’s like a grain of sand,” Reid said of the surcharge.

Related
How ‘glossy work’ can disrupt your workforce
Organizations adapting to executive shortage in wake of hot market
3 ways to maintain an effective onboarding process during COVID-19
Employers vs. workers: Who will win the future-of-work debate?
Tags