Features Compensation Legislation
Manitoba to increase minimum wage to $13.50 in October, plans to reach $15 next year 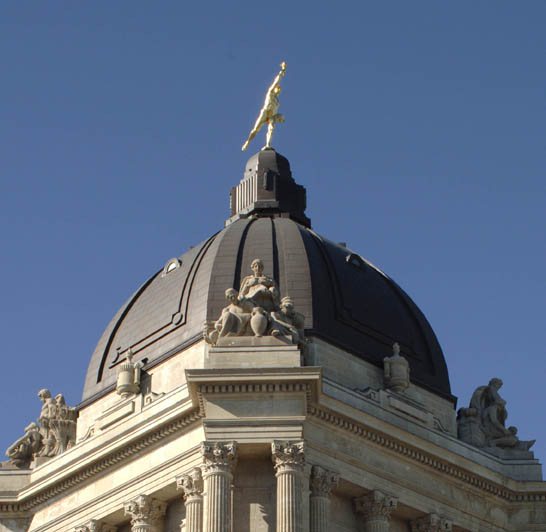 The Golden Boy perched on top of the Manitoba Legislature in Winnipeg. Photo courtesy Government of Manitoba.

The Manitoba government plans to incrementally increase the province’s minimum wage to $15 an hour by October 2023, but the move is being criticized for not going far or fast enough to match inflation.

“Wages need to be competitive with other provinces,” Premier Heather Stefanson said Thursday.

Stefanson said the province plans to speak with small businesses about support programs to help them adjust to higher payroll costs.

Government Services Minister Reg Helwer said the plan is meant to get the province back to more predictable changes in future years when it reverts back to its regular formula.

Manitoba uses an index to adjust the minimum wage every Oct. 1 to match the inflation rate from the previous year. The Progressive Conservative government passed legislation earlier this year giving it authority to boost the hourly rate above the current formula.

Under the former formula, Manitoba’s minimum wage would have become the lowest in Canada at $12.35.

Saskatchewan has had a lower minimum wage than Manitoba, but recently announced it is raising it to $13 an hour this fall and to $15 an hour by 2024.

Manitoba Federation of Labour President Kevin Rebeck said the increase is not enough and remains the second-lowest in the country.

“I think working people in Manitoba deserve better,” Rebeck said. “They need more help from this government to keep up with all the rising prices and costs.”

The federation had called for a minimum wage of $16.15 an hour immediately.

Canada’s year-over-year inflation rate slowed to 7.6 per cent in July after reaching a nearly 40-year-high of 8.1 per cent the month before. It had previously increased every month since June 2021.

NDP Opposition Leader Wab Kinew said indexing to inflation from the previous year means Manitoba will always be behind on what’s necessary for a living wage.

“At the end of the day, you will still have a situation where people can work full-time in Manitoba and live in poverty,” he said.

Kinew also criticized the government for not laying out immediate plans to help businesses adapt to the changes.

“We are committed to working with our business community to address the impacts of this wage increase and find workable solutions together,” he said.

Loren Remillard, president of the Winnipeg Chamber of Commerce, said an increase was expected, but the amount will have a significant effect on small businesses that have still not recovered from disruptions during the COVID-19 pandemic.

He said it’s essential the province provides assistance as an increase of this size can be devastating to many small businesses.

“We need to make sure that everything is on the table.”