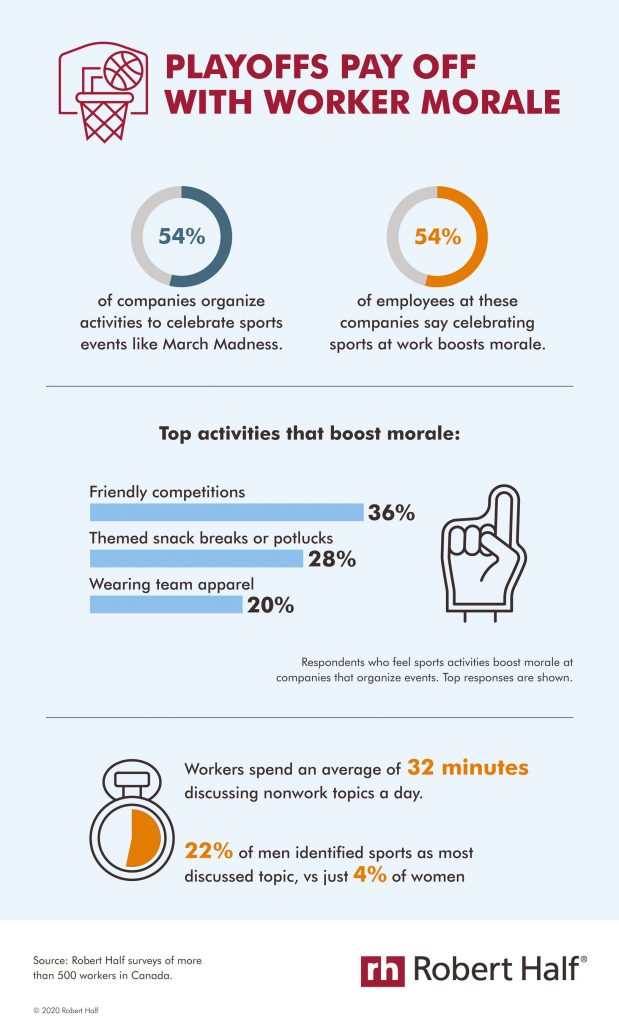 March Madness is upon us, and employers might want to encourage — and not discourage — water cooler talk about the annual college basketball tournament.

That’s because a survey of Canadian professionals found that joining in the spring sports hoopla has perks, including a much-needed morale boost in the office.

More than half (54 per cent) of respondents to the Robert Half survey said their company organizes activities to celebrate sporting events, and the same percentage feel these festivities improve their on-the-job morale.

Participating in friendly competitions and partaking in themed snack breaks and potlucks were cited as the most impactful activities among workers who reported a boost in spirits.

Employees may also engage in sports talk during playoff season. In a separate survey of Canadian professionals, respondents said they spend an average of 31.8 minutes per day discussing non-work topics with colleagues. Nearly one-quarter of men polled (22 per cent) identified sports as the most popular non-work topic of conversation in the office, versus four per cent of women.

“Companies that encourage their employees to enjoy events, like sports playoffs, recognize the positive impact these celebrations can have on both individual and team morale,” said David King, senior district president of Robert Half.

“Organizing activities like friendly office competitions, jersey days or watching games as a group gives workers the chance for a refreshing break, while helping foster greater camaraderie among staff,” he said. “While it’s important that managers clearly communicate productivity expectations when planning these events, employees also need to be responsible for their work and ensure they’re staying on top of tasks even when taking part in the fun.”

The online surveys were developed by Robert Half and conducted by independent research firms. They include responses from more than 500 workers employed in office environments across Canada.