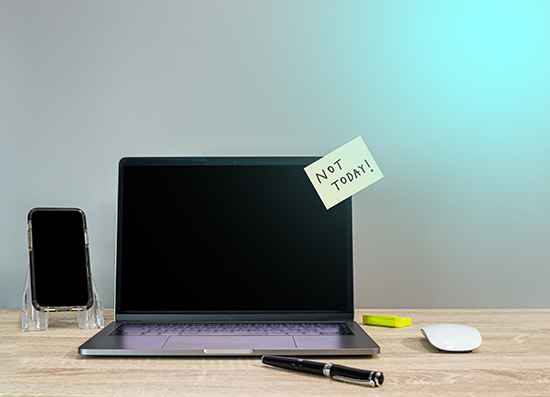 If the European experience is any indication of what is to come, a legal right to disconnect in Canada may, at least initially, be more symbolic than anything. (kaipong/Adobe Stock)

France enshrined such a policy into law years ago, with other countries in the EU also seriously considering it.

The proposed right to disconnect is a formal recognition by the federal government of the negative impacts of digital technologies on work-life balance and mental health.

The impacts of “hyper-connectivity” have become pronounced during the pandemic as an unprecedented number of employees have had to manage the blurring of work and home life.

As technology facilitates faster and more responsive work, it inevitably creates increased demands on workers, particularly when they are home anyways. Left to their own devices (literally and figuratively), it is not surprising that work and home have become indistinguishable for many employees.

Adding to the concern, the World Health Organization has recently confirmed that working longer hours, buttressed by the pandemic, is killing hundreds of thousands of people per year.

To the extent that employees are rewarded for “hyper-connectivity,” studies suggest that women’s careers may suffer disproportionately on account of child-care and household responsibilities.

For these reasons, federally regulated employees may soon have an official right to disconnect.

If the European experience is any indication of what is to come, a legal right to disconnect in Canada may, at least initially, be more symbolic than anything.

In France (which remains the only country to have legislated that right) the law provides no guidance on how it is to be implemented. It is up to employers and employees to figure that out through mandatory consultations, failing which employers are expected to implement a policy.

Notably, there are no penalties for failure to reach an agreement or implement a policy. Nevertheless, it is taken seriously.

Shortly after the legislation was passed, in 2018 a French court reportedly ordered a pest control company to pay a former employee €60,000 in compensation for his on-call time as a result of breaching his “right to disconnect” outside of office hours.

In Canada, where provincial and federal workplace legislation already covers overtime, rest periods, and leaves, some critics have questioned whether a right to disconnect law is even necessary.

For one, Canadian organizations are required to track hours, and there has been increased litigation in recent years from employees seeking overtime pay for off-the-clock work that failed to be recognized.

Further, Ontario’s recently enacted “three-hour rule” requires provincially regulated employers to compensate workers for on-call time, even if they are not actually called into work.

Provincial and federal laws exempt managers from all industries from overtime, and numerous industries and professions are exempt altogether. For those employees, there has been no reprieve from the creep in work hours, which they have had little leverage to negotiate in a competitive market.

The Canadian legislative process is long and unpredictable.

Currently, the right to disconnect remains in the early consultation phase, and a full recognition of this right would require an overhaul of current legislation, along with societal norms regarding work in various industries.

Employers, however, should take note. COVID-19 has fundamentally changed employee expectations in the workplace. Many industries are suddenly experiencing a labour shortage, with employees increasingly emboldened to quit or seek other opportunities.

Rather than waiting for the government to dictate the terms of the employment relationship, organizations seeking to retain and attract talent would be wise to adopt a proactive response to the factors underlying the right to disconnect.

In industries where hyper-connectivity is integral to the job itself, one approach could be to offset that expectation with increased vacation time and mental health days. For more traditional 9-to-5 roles, a formal policy recognizing the employee’s right to be offline outside of business hours can improve morale and job satisfaction.

Whether or not a legal right to disconnect is imminent in Canada, it is a conversation that will surely continue with increased fervour.

Related
Enforcing work standards in the digital era
Will ‘densified offices’ still work post-pandemic?
Five common misconceptions around vacation law in Canada
Is disciplining an employee worth the effort?
Tags