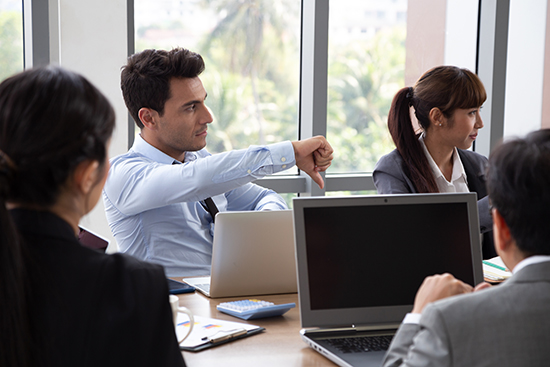 Avoiding conflict at all costs is no way to manage risk. It’s important to make people feel that dissent is not the same thing as disloyalty, writes Evert Akkerman. (comzeal/Adobe Stock)

Many years ago, German general Hermann Balck said the following about Heinz Guderian, one of his fellow generals: “Guderian was always in conflict with everybody else. He was very hard to get along with, and it’s a tribute to the German Army, as well as to Guderian’s own remarkable abilities, that he was able to rise as high as he did.”

Creating and maintaining a safe space for dissenting opinions within the military, companies, and organizations can be crucial for success.

U.S. President Franklin Roosevelt was famous for hearing out an advisor, then calling in another advisor with an opposing view, at which point Roosevelt would sit back and watch them go at it.

And speaking of Kennedy, here’s an example of one dissenting opinion saving the world. During the Cuban Missile Crisis of October 1962, Soviet Navy officer Vasili Arkhipov cast a njet-vote that prevented a Soviet nuclear strike, which would have likely triggered a full retaliatory American response.

Arkhipov was second-in-command of submarine B-59, and he refused to authorize the captain’s plan to use of nuclear torpedoes against the U.S. Navy, a decision that required the agreement of the three senior officers aboard. Captain Savitsky and officer Maslennikov wanted to launch, but Arkhipov felt their information was incorrect and persuaded them to await orders from Moscow.

Workplace diversity and inclusion: What does it really mean?

Inspired by the Bay of Pigs fiasco (also Kennedy), Yale psychologist Irving Janis coined the term “groupthink,” which refers to a psychological drive for consensus at any cost while suppressing dissent and appraisal of alternatives.

What if Enron had encouraged dissent, or Arthur Andersen, or Bear Stearns, or Lehman Brothers, or BP at the time of the Deepwater Horizon oil spill? Or, for that matter, the captain of Titanic? Dissenting opinions could have made a huge difference here.

Avoiding conflict at all costs is no way to manage risk. It’s important to make people feel that dissent is not the same thing as disloyalty.

They must be comfortable speaking up. And people in leadership positions need to be comfortable with a diverse chorus of voices — and appreciate how crucial this is.

While the urge to get along is understandable, a singular focus on avoiding conflict and enforced harmony will stifle debate and an honest exchange of views.

According to research, we assume that diversity triggers conflict in relationships.

Other research shows that having a diverse workforce improves decision-making and problem-solving, and boosts creativity and flexibility. We believe it, but it’s tough to take the plunge.

In April 2016, the same Harvard Business Review reported that “It’s well known that people have a bias in favor of preserving the status quo; change is uncomfortable.”

This status quo dynamic is at play whenever we over-value a type of experience that the organization already has in abundance — and assume that what it needs is more.

For instance, government entities tend to place a lot of weight on job candidates’ having public sector experience, while their postings and websites are listing to port with words like diversity, inclusivity, and strategy.

If a government agency wants to get better at customer service, why not add a fresh perspective from people who have worked in the for-profit sector and bring this kind of experience to the table? A focus on “fit” would lead to more of the same, reinforcing a stale and conformist culture.

In his book, The Difference, scientist Scott Page argues that in many problem-solving contexts, diversity trumps ability.

Different viewpoints typically lead to better outcomes. For example, if you want to get better at tennis, Page says, you may have better results with a tennis coach, a nutritionist, and a fitness trainer — than with three tennis coaches.

Also, there is nothing wrong with a bit of friction and tension when people with different opinions and perspectives clash.

I’m not saying it’s easy, but it can be quite healthy and typically leads to better results. In an example from my own practice, several years ago I (a results-oriented HR guru with a bunch of opinions) was parachuted into a bureaucratic and process-oriented organization, where people looked at new ideas the way chickens look at storm clouds.

I was clearly a misfit in this environment. There were a complete lack of chemistry and quite a few tense meetings, but I did implement new approaches to recruitment, and got the job done.

Related
Considering blind spots in leadership and HR management
Power of parity in boards: past, present and future
Leadership lessons from the U.S. presidential election
The impact of UFOs on corporate culture
Tags