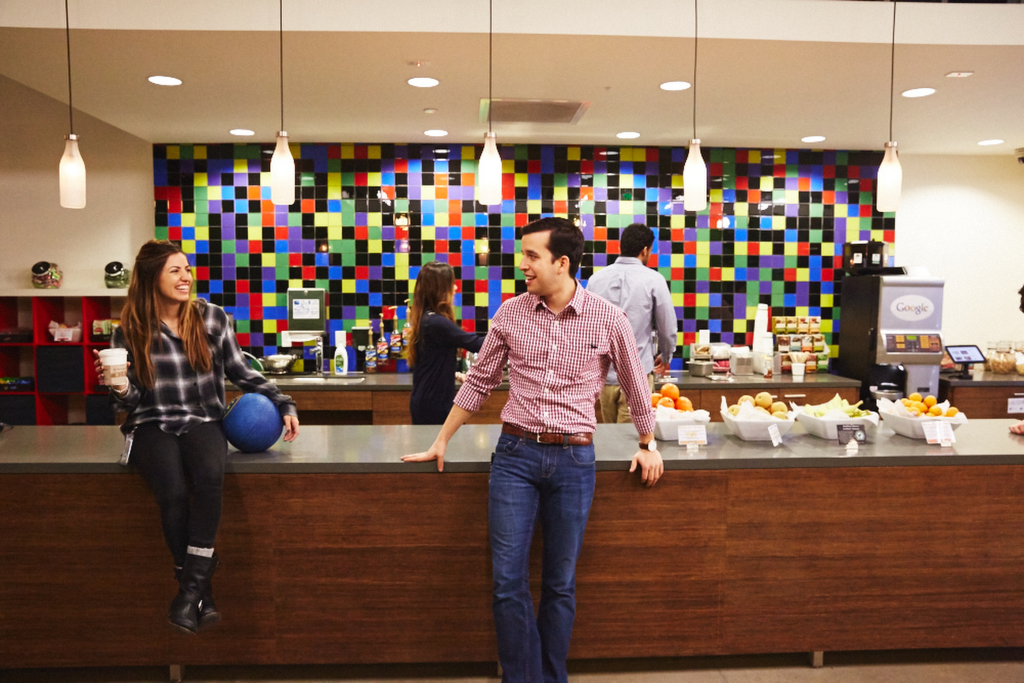 Google workers in one of the company's microkitchens. Photo: Google

When Lightspeed Commerce Inc. staff headed back to their Montreal office this year after a pandemic hiatus, they found a space double the size of their last with a restaurant serving free meals, a smoothie bar and a barista to craft custom drinks.

A gym and a courtyard complete with foliage and a fountain are coming soon.

“We’re making it like a very unique experience and the entire office is kind of a lounging area where we want people to just feel super comfortable,” said J.P. Chauvet, chief executive of the Montreal-based company software company.

Amenities aren’t unusual for tech companies, which have long offered luxurious office perks for talent acquisition and retention, but they have been beefed up in recent months to lure staff back to company workspaces at least a few days a week and to entice prospective hires.

It’s seen as a necessity even as remote work gains popularity in C-Suites and staffing cuts continue across the sector.

Something to ease the transition

The thinking at many companies is that staff might not be keen on returning to the office without something to ease the transition — such as a splashy new space with catered lunches, room for workouts and other perks like childcare.

Some have even taken an extra step and welcomed staff back with a party and swag like backpacks with enough space for a laptop.

Many have also highlighted these efforts and their Instagram-worthy digs online and in negotiations with prospective staff in hopes it will make the difference for top talent.

“All companies are trying to recruit and retain talent and they’re trying to be as creative and as innovative as possible,” said Michael Halinski, associate professor of organizational behaviour and human resource management at Toronto Metropolitan University.

“Whether that means adjusting work arrangements or adjusting benefits or perks, organizations are going to continuously try to do different things to reinvent themselves.”

Lightspeed’s choice to revamp its space was made early in the pandemic, when Chauvet recalls other companies stopped leasing their offices or downplayed their importance.

“We actually took the completely opposite route,” he said. “We said, ‘Well, let’s use this time to renovate everything while everybody’s out, so that when they come back, they will be wowed.”’

Most staff, who are encouraged to visit the office three days a week, have been delighted with how much more space there is for meetings and even after-work gatherings, he said.

They also like the Ketra lighting Lightspeed installed, which creates a mood-boosting ambience based on the season, weather and time of day.

Chauvet credits the new office with helping the company reach one of its best months for performance last year in March, the same month staff returned to the office, and believes it will help with hiring about 300 workers in the next five weeks.

Not all workers keen to return

But many workers are keen on avoiding offices.

A Hired study of 2,000 tech professionals in Canada, the U.S. and the U.K. found job seekers have preferred remote-only roles to primarily-remote or non-remote roles since June 2021.

As of June 2022, 93 per cent of job candidates surveyed preferred remote or hybrid jobs.

“Commercial offices are now having to compete against many workers that enjoy remote work due to the time savings of commuting and flexibility of working closer to where their families are and the ability to get a jog in on their lunch break,” said Aaron Short, the chief executive of B-Line, a Halifax-based workplace management and security platform, in an email.

He insisted morale and the broader culture of companies are suffering because of remote work. People are happier when they have flexibility around where they work, but also need in-person collaboration, he reasoned.

“Video conference calls and emails do not always bring out the best in people, but having a meal together does,” he said.

Despite the push for remote work, Natasha Koifman is keen on keeping her office.

The head of public relations firm NKPR bought a new building on Richmond Street West in Toronto that her company will move into next summer.

She’ll model the office after the Public Hotel in New York, which has an outdoor space almost like a miniature Central Park, and add a rooftop deck, lounges and perhaps, a cafe.

“We’re currently in the office Tuesdays and Thursdays, but my goal is for people to want to come in all the days,” Koifman said.

“The goal is to create an environment that feels as cozy for them as their house does.”

But amenities aren’t the be-all and end-all for many workers. Some other perks are even more desirable.

The Hired study found flexible work schedules, paid time off, health benefits, retirement plans and performance-based bonuses were the most compelling perks a company could offer beyond compensation in 2022.

“I often think I care about the people I work with, they matter to me and so if that’s the case, then how are you demonstrating that?” she said.

“It’s not just in the office space, but it’s also in the everyday of how you work with your people.”

Related
‘Office centricity is over,’ declares Shopify CEO as remote-work model is embraced
Returning to work means putting on your ‘mask’
Protecting a unique company culture in a fractured world
How to retain your employees during office re-openings
Tags