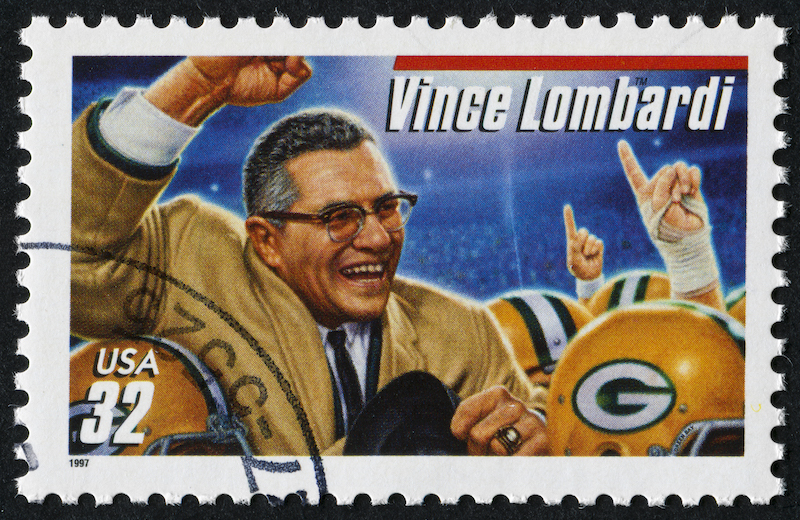 Cancelled stamp featuring Vince Lombardi, the legendary NFL coach. Despite efforts to increase diversity, there is a lack of minority head coaches in the National Football League. Photo: Getty Images

A year ago, Richard Lapchick was at least willing to consider it might be cyclical. Not any longer.

Not after all but one of the coaching vacancies in the National Football League (NFL) have been filled. Not after — in a league where 70 per cent of players are minorities — blacks have been hired for only two of the 19 open head coaching spots over the last three years.

“It’s very discouraging that this continues to happen,” said Lapchick, the director of The Institute for Diversity and Ethics in Sport at Central Florida. “It’s not like there are no qualified candidates. These people are out there and ready.”

They may be ready, but NFL owners apparently aren’t. Despite the adoption of the Rooney Rule in 2003 to increase the number of black head coaches, there are only three among the four minority head coaches (Washington’s Ron Rivera is Hispanic) currently employed in the league.

And, with only the Cleveland Browns still looking, that number won’t be changing much — if at all.

“There’s not much to be optimistic about from this year’s results for sure,” said Lapchick, who annually gives sports leagues grades on their efforts to diversify. “This is a serious cause for concern that we’ve now gone three years with the lowest numbers we’ve had in a long time.”

Just why those numbers are so low is open to debate, especially since the NFL has made efforts over the past two decades to promote minority hires. The Rooney Rule not only mandated that teams interview coaches of colour for coaching vacancies but was later updated so that the general manager job was included.

And before last season, the rule was toughened so that teams couldn’t skirt the requirements with sham interviews.

Still, the number of black head coaches stands at just three, down from a peak of eight. The situation in the GM’s office is even more bleak, with just one black general manager.

Not exactly the type of progress envisioned when former Steelers owner Dan Rooney spearheaded the minority hiring rule nearly 20 years ago. The numbers are so bad on the GM side that Lapchick gave the league an F grade in that category for racial and gender hiring practices as part of an overall B grade.

“It’s a serious problem,” Lapchick said. “It’s fair to say nobody is feeling pressured to diversify, especially at the club level.”

If it’s a problem, it’s one that doesn’t get a lot of attention outside of the annual head coach hiring season. That might be, Lapchick said, because players themselves have been relatively silent on the subject even while speaking out on social issues outside the league.

It’s also true that as recently as the 2018 season there were eight black head coaches before five of them got fired.

NFL defenders point to that stat and argue that the latest hirings are indeed cyclical and the low current number of minority coaches is an aberration. NFL owners are so desperate to win, they say, that they would hire their worst enemy if they thought he had the best chance of getting them to a Super Bowl.

And, like it or not, the NFL remains a closed society where the good ol’ boy network remains powerful.

Not a great history to defend, and the lack of minority head coaches is just as indefensible.

Indeed, the NFL deserves low grades for its hiring practice both on the sidelines and in the executive offices. The league is failing the very players who make billionaire owners even richer, and at some point the players are going to decide they want to have a say about it.

There’s no debate that coaching is a brutal business no matter what colour your skin is. Coaches are hired to be fired, and all but the most successful eventually lose their jobs for not winning enough.

What isn’t debated is this: There’s plenty of good black coaches out there.

And they deserve a chance to succeed.

Tim Dahlberg is a national sports columnist for the Associated Press. He can be reached at tdahlberg@ap.org or follow him on Twitter @TimDahlberg.

Related
Mixing alcohol, employees can be a costly cocktail for employers
‘Let’s go get both’: Welcome to Talent Canada
Curling Canada announces pay equity for Brier and Scotties champions
The most meaningful New Year’s resolution for leaders
Tags