Features Culture Employee Wellness
A culture of health: How can you tell programs are working? 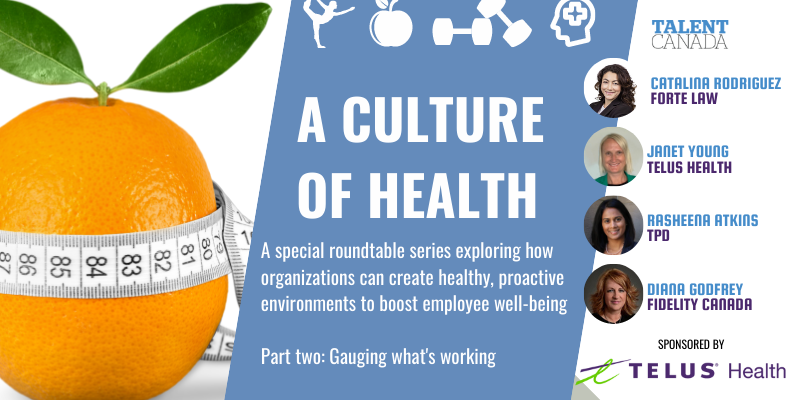 This is part two in a special look at creating a culture of health. Last week, we looked at where employers can begin their journey. In part three, we looked at best practices in communicating programs to employees.

This week, we turn our attention to how leaders can tell if programs are working and delivering the expected results.

The conversation was sponsored by TELUS Health and is designed to take a deep dive into what employers, business leaders and HR professionals need to do in order to build, sustain and get the most out of their investment in creating healthy workplaces.

Janet Young is not a fan of measuring the success of a healthy workplace program through the traditional return-on-investment (ROI) lens.

“Frankly, (it) really limits you and doesn’t get at all the other meaningful reasons why you should support well-being,” said Young, director, well-being and health services, people and culture at TELUS Health.

Instead, she focuses on how her company’s culture is evolving and changing. That includes more positive and engaging leadership practices, she said.

“We see leaders building well-being into their annual business plans just like any other business areas of focus,” she said. “For us, that’s a really good indicator of success and things that are changing in a positive way.”

Something else she cited was senior leaders speaking out publicly about well-being and their own mental health experiences on social media and other communication channels.

That included a member of the executive leadership team who recently spoke out about his panic attack disorder, she said.

“That got such a great reception,” said Young. “In an environment that’s not safe, that doesn’t happen.”

Those organic conversations, that happen — and sustain themselves throughout the year — help employees see that the organization cares about them.

For those that need to see hard data, engagement surveys can reveal what is working. So can examining the data around disability claims, absenteeism and turnover, she said.

Diana Godfrey, senior vice-president of HR at Fidelity Canada, said her company recently amended its engagement survey to include a question around wellness.

“We did that specifically because of COVID and the pandemic and the anxiety that the workforce was facing,” said Godfrey. “It really changed our perspective on wellness.”

There’s also a big push on not just offering mental health support but talking about it and encouraging employees to seek help, she said.

“We look at all of that data carefully, because it helps inform us as to whether we have the right programs,” said Godfrey.

“I think we all understand that financial wellness is imperative to a person’s overall well-being,” said Godfrey. “If there are stresses associated with that, it can manifest itself in other ways.”

Rasheena Atkins, vice-president of people and culture at TPD, said that when you start to make commitments in the wellness space, you tend to see a lift in the metrics you’re already tracking.

But if you pay attention, you’ll notice some other things changing as well — including employee participation in nearly everything.

“You may be running social events, you may be surveying your employees — especially in a remote environment, about any old thing,” said Atkins. “And we see a lift in that type of participation.”

For example, the first time the company surveyed employees on diversity, it didn’t get much engagement.

That led to better data and allowed the company to move the needle on pay equity and other initiatives.

“I just think it’s a little bit difficult to focus on a single metric and say, ‘My wellness plan is working,’” said Atkins. “We are seeing across the board lift as we start to focus on these programs.”

It starts at the top

Catalina Rodriguez, an employment lawyer and workplace investigator at Forte Law, said a strong culture hinges on the top ranks.

“If your leaders are not emotionally intelligent, kind, vulnerable people… then it’s not going work, right?”

If executives are burning the candle on both ends, that becomes the culture, said Rodriguez.

“You’re going to have a culture of burnout where people don’t feel like they can put boundaries around themselves and work because the executives don’t do it,” she said.

“But it is a cultural transformation that you have to embark on,” she said.