Features Culture Employee Communications Employee Wellness
A culture of health: How to spread the gospel to employees 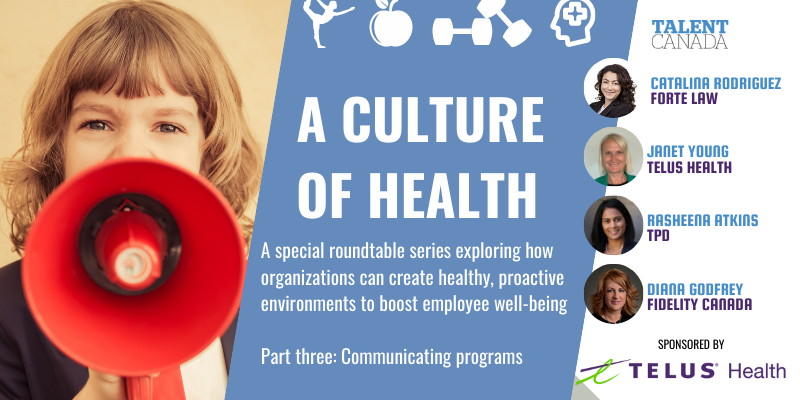 This is part three in a special in-depth series on creating a culture of health at Canadian organizations. In part one, we looked at where employers can begin their journey. In part two, we dived into how leaders can tell if programs are working.

Now, we take a look at the best practices in communicating programs to employees. This conversation was sponsored by TELUS Health and is designed to take a deep dive into what employers, business leaders and HR professionals need to do in order to build, sustain and get the most out of their investment in creating healthy workplaces.

It should never start with an email.

Rasheena Atkins, vice-president of people and culture at TPD, said that’s the most common mistake employers make when rolling out a new benefits program.

“We make the assumption, from HR, that we’ve done our work and the employee now has this information and has read it,” she said. “That’s rarely the case.”

A better strategy is to announce it an employee town hall. Then, you can follow it up with all the lengthy documentation summarizing the programs, said Atkins.

“Then show up in departmental meetings and go over it again and field the questions,” she said.

With so many people working remotely, it’s critical for HR professionals to put themselves in a place where they are present to answer questions from employees — because the questions might not come otherwise, she said.

While explaining what is being offered is critical, the conversation shouldn’t end there: Employees need to know not only what is available, but why it’s being offered.

“If we have a data point that has caused us to go and look at a certain program or initiative, let’s make that available so they understand why,” said Atkins. “The education piece is critically important.”

Then the role of the employer, and HR, is to listen — to the data points, to the feedback from employees — to see if there are any tweaks that need to be made to avoid participation drop off.

“We’ll often see participation dwindle, and then we wonder what went wrong after,” she said. “Stay proactive and report on that data, and make sure that satisfaction is there for the long term.”

“We highlight and share with the organization some aspect of our benefits program to bring awareness,” said Diana Godfrey, senior vice-president of HR at Fidelity Canada.

It goes out by email, and features information and links about the various programs available.

“We might be talking about telehealth and the availability of online practitioners,” she said. “We might also talk about having drug dispensing capability.”

The HR team has also taken the show on the road, for example, by having the manager of compensation and benefits go into team meetings. And in this era, that means attending virtually — because “doing it literally might be challenging.”

The more people understand the benefits, the more take up there is, said Godfrey.

“You’re creating an environment where conversations can be had and people will ask more questions,” she said.

There is little risk to overcommunicating a program, she said, but it is very possible to under communicate.

Organizations should also spend time understanding the needs of the different generations on their payroll, said Janet Young, director, well-being and health service, people and culture at TELUS Health.

“We do spend a lot of time trying to understand the differences that exist, even within our employee population, and how they interact with things,” she said.

That has involved creating a “persona centre,” which is borrowing a page from the marketing department’s playbook, said Young.

Pinpointing communication has made a difference, because it enables HR to speak the language of those employee groups and catch their attention.

TELUS Health has also tapped into influencers within its business.

“People that live and breathe well-being, that love it, that want to talk about it all the time, they’re out there,” she said.

Arming those people with key messages and promotional information can go a long way.

“That’s helped kind of get our tentacles into the business, because it is so big,” said Young. “It can take a long time sometimes for messages to trickle down. Leveraging that network of influencers has really made a big difference.”